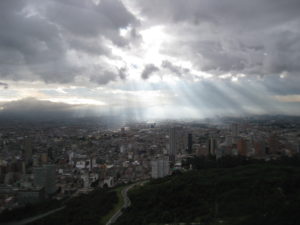 Sorry for the small number of posts recently.  I just spent the last couple weeks doing some adventure travel through Colombia.  It had been one of the few South American countries that I hadn’t visited.  While there I checked out Bogota, Medellin, Santa Marta, the Tyrona National Park, and Cartagena.  I paraglided for the first time, hiked, swam, body surfed, and attempted to experience as much of the local culture as possible.

Colombia has changed drastically from the days of FARC and Pablo Escobar’s narcotraficantes.  It is one of the safer Latin American countries I’ve visited.  The people are very pleasant and the police are professional.  I would highly encourage those of you with an adventurous spirit to check the country out.  If you are interested in a local guide, shoot me an email.  I can heartily recommend the services of a friend who is a professional tour guide down there.

Since this website is primarily about self defense, firearms, and training issues; I’ll stop rambling about my travel adventures.  I will share some photos that you might find interesting….

From the National Police Museum in Bogota, some guns you’ve probably never seen: 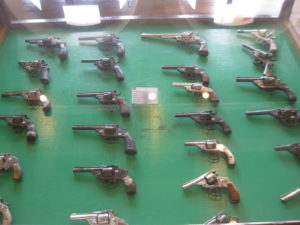 The most obscure collection of break-top revolvers I’ve ever seen. 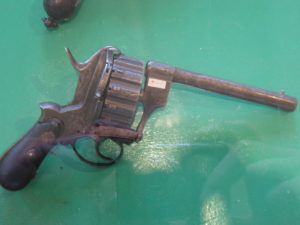 The local slang for this one is “chongo”…a home made pistol. One of the reasons why gun control laws will never be effective. 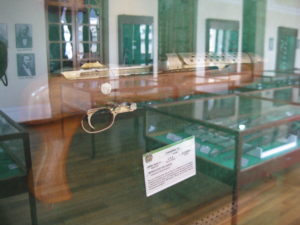 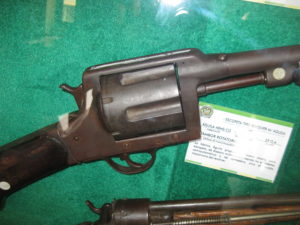 Since we are talking guns, you may be interested to know what the locals carry.  The national police carry SigPro 9mm pistols in Blackhawk Serpa holsters.  More than half of the National Police (there are no local police forces) in Bogota also carried Galil (an Israeli version of the AK-47) rifles.  The cops in Cartagena carried M-16 A-2s as a supplement to their Sigs, but the M-16 had an empty magazine inserted and a visible yellow empty chamber flag!

All the cops are also armed with a PR-24 style baton, handcuffs, and a radio.  That’s it.  Most of them carry empty spare magazine pouches at the small of their backs.  I never saw any cops with full magazine pouches. 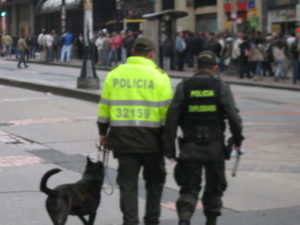 Explosives Detection cops on random patrol in Bogota. Note the empty mag pouches on the belt of the cop on the right.

The national police around the Presidential Palace carry HK G-36 rifles instead of the Galil.

I saw several citizens walking the streets of Bogota with pepper spray in hand and even saw one young man working the front desk of a hotel with an ASP baton sticking out of his jacket pocket.  Security guards were almost always armed with 4″ S&W revolvers, although I saw a few 3″ round butt J-frames on some security guards’ belts.  All the security guards had cartridge loops sewn to the outside of their nylon belt holsters.  The loops were full of round nosed lead .38 special ammo.

According to the police with whom I spoke, it is relatively easy for a citizen to get a gun permit down there.  The guns are limited depending on geographical location.  In the cities,  people can get permits only for handguns.  Rifles and shotguns are not allowed.  In the rural countryside where hunting is common, “almost everyone” has a long gun, but pistols are prohibited.

I’ll be back to posting more regularly tomorrow and will kick it off with an article about the mass killing in Colorado.