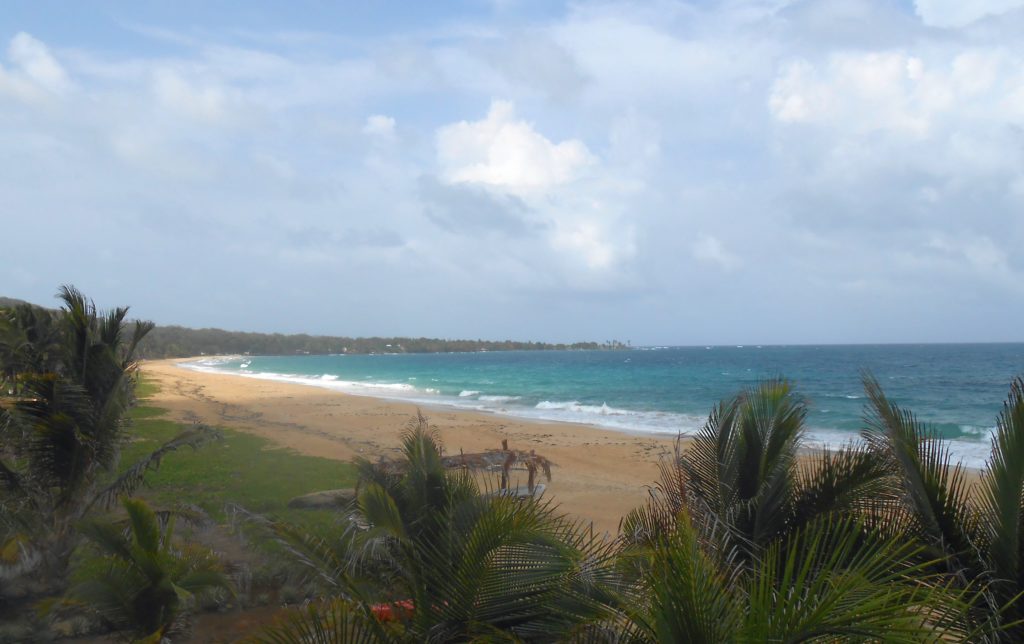 The beach we had all to ourselves for a week.

I just got back yesterday from a week-long trip to Nicaragua.  Nicaragua isn’t on most folks’ travel lists, but it ended up being absolutely beautiful.  I had a short amount of time off work, so the girlfriend and I wanted a deserted beach where we could completely relax for the few days we could get away.  I found Corn Island in Nicaragua and it fit the bill perfectly.

Corn Island lies about 50 miles off the eastern coast of the country.  It’s a tiny island with only about 9000 total residents.  There are only about seven hotels and most of those have five or fewer rooms.  The entire island is powered by just three electric generators.  Power outages are constant.  There isn’t much of a tourist infrastructure, but the island had lots of uninhabited beaches.  Uninhabited beaches were exactly what we were looking for.  Combine that with my goal to visit every Central and South American country (I had not yet been to Nicaragua) and I booked a flight. 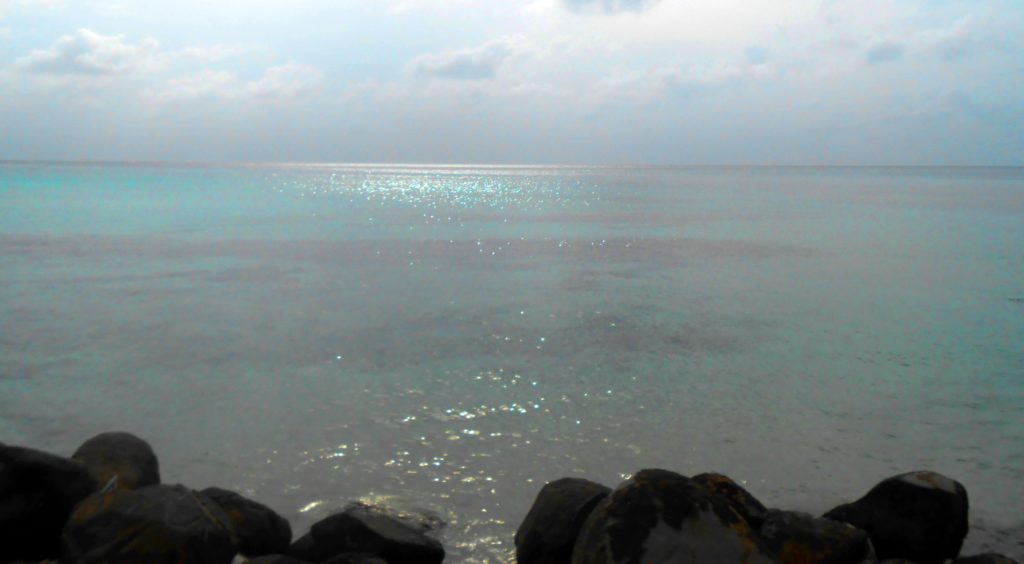 We flew into Managua (the capital city) and spent the night there.  Managua reminded me quite a bit of the cities in Cambodia.  It was hot, dusty, polluted, and poor.  It wasn’t much fun, but we didn’t have any problems with regards to safety.  After walking around the city in the morning, we caught a local flight to the island in the afternoon.

The flight landed and we were ushered into the airport which consisted of a single room.  It took about an hour for the customs official to manually enter the 40 passengers’ passport details into a paper notebook.  There wasn’t a single telephone or computer in the airport.

After our “immigration check” we caught a gypsy cab (70 cents to go anywhere on the island) outside of the airport and made it to our hotel.  I booked one of the higher end hotels.  It only had four rooms and we were the only guests.  The hotel was right on a mile-long beach and we had it all to ourselves for the week. 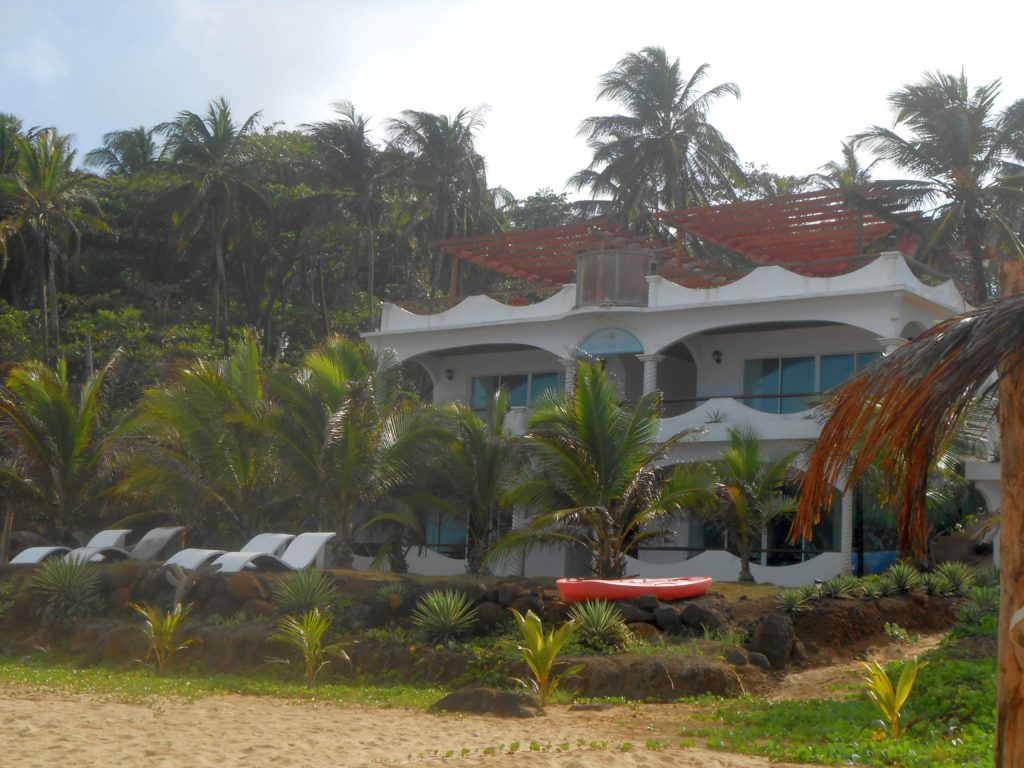 The hotel where we stayed

Not much to report from the trip.  We swam, snorkeled, scuba dived, body surfed, hiked the island’s two biggest “mountains” and rented motorbikes to check out the island.  We also ate lobster…a lot of lobster.  The island’s biggest source of income is lobster fishing and a whole lobster dinner (with salad, rice, plantains, and a couple beers) was around $12.  I read eight books and spent a lot of time just laying around.  It was a refreshing break.

As far as gun and crime stuff, we didn’t have any problems.  Despite Nicaragua’s violent past, it is now the safest of Latin American countries.  The island had even less crime than the mainland.  There is very little violence there, with petty theft and the occasional drunken barfight between the locals as the only criminal activity.  Most of the families on the island have been there a very long time.  Everyone knows everyone.  This cultural homogeneity combined with the accountability that comes from knowing all your neighbors leads to a small crime rate.

There are only about eight cops (Nicaraguan National Police) on the island.  The one time I saw a pair of cops on patrol, they were not wearing gunbelts.  I saw one cop at the airport who was wearing a Beretta 92 in a cheap nylon holster with no spare mags or other gear.  There was also a single soldier who was assigned to guard the airport runway.  He carried a folding stock AK-47 strapped to his back.

Interestingly enough, I saw quite a few armed security guards in Managua.  Unlike most Latin countries, the security guards looked fairly professional.  They all carried blue steel S&W Model 10 revolvers in fairly decent holsters.  The guns appeared to be well cared for. I didn’t see any spare ammunition being carried, but most of the guards had PR-24 batons, pepper spray, and handcuffs.  That’s almost unheard of in a third world country.

As a side note, I do a lot of third world travel.  The single most common firearm I see in my travels is the S&W .38 revolver.  If you travel internationally, you likely won’t be able to pack your pistol.  Do you think about how you might “acquire” a gun if you needed one?  I’ve thought about it extensively and have come to the conclusion that my easiest source of an emergency pistol is to disarm a security guard.  If I do that, I’m going to have to know how to run a .38 revolver and be able to do it well.  Most guards don’t carry any spare ammo, so six shots is all I’m going to get.

Most of us don’t shoot revolvers nearly as much as we shoot autopistols.  Because I want to be able to run a third-world .38 as if it was an extension of my hand, I make it a point to shoot about 50 rounds monthly through one of my full size .38 revolvers.  When was the last time you shot a Model 10?  If you travel internationally, I would advise that you get some practice.  While you are at it, tune up your skills with an AK-47 and FN FAL.  Those are the most common rifles I see in other countries.

I enjoy third world travel because it provides challenges that I don’t normally experience.  Solving the problems you encounter in a third world country will quickly make you a very adaptable person, more so than any other educational opportunity I’ve experienced.  Thinking through my self defense plans on the island, I recognized that I was in a truly unique environment that required some adaptation from my normal plans. 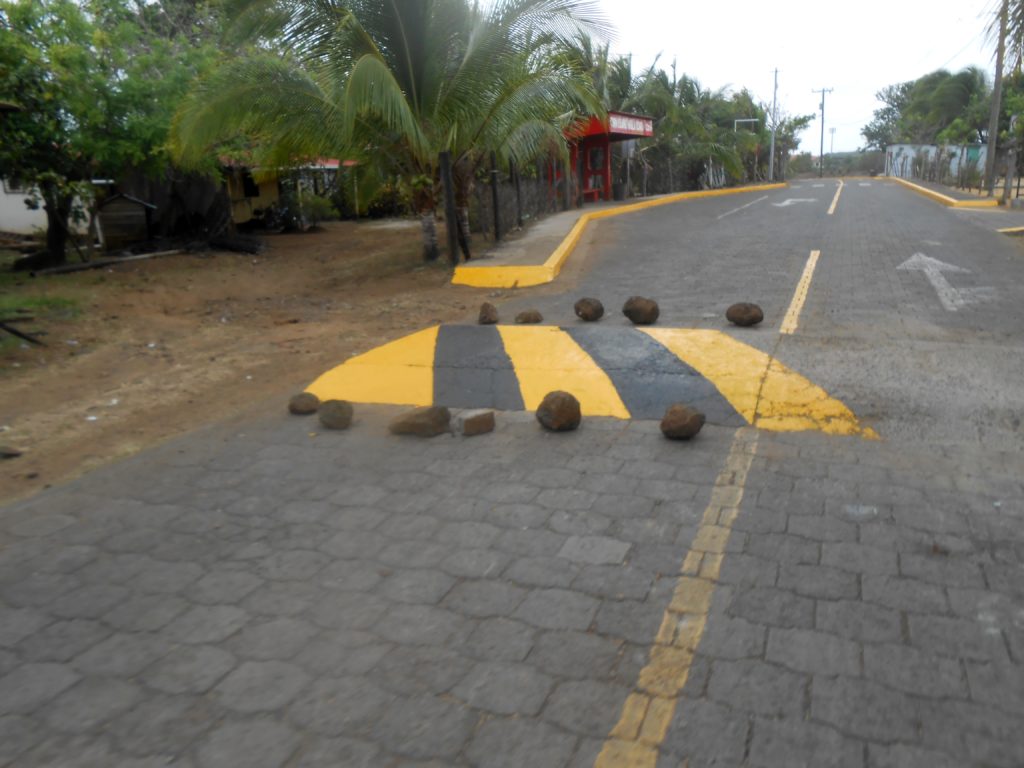 Third World problem solving. How do you protect your freshly painted speed bump if you don’t have traffic cones? Just use big rocks.

In most third world countries, I rely on a knife (or knives) for self protection.  Depending on where I’m traveling, if I needed to use one, I wouldn’t likely report the use to the local police.  There just isn’t much of a chance of a fair trial or judicial proceeding as an American who stabs or kills a local in a developing nation.  You’ll spend a long time in prison or get killed “resisting arrest” if you go to the police.  It’s better to quickly get the hell out of the area if you have to use lethal force.

That poses quite a problem on my little island.  There were literally only about 20 gringos on the whole island.  There are two local flights off the island and two ferry departures every day.  Everyone knows everyone else and most are relatives.  Escape options are few.  If I stab a local in self defense, how quickly do you think the word would spread around the island that the cutting was done by “the big gringo dude?”  How do you think the locals would respond?  Besides dealing with the initial problem that caused me to use my blade, I would have the additional unpleasant difficulty escaping the rope of the lynch mob that would be waiting for me at my hotel.

I still carried my blade, but I was also diligent in carrying my flashlight (as an impact weapon) and my pepper spray.  Even though less effective in individual combat than using a knife, smashing a dude in the teeth with my flashlight or spraying him with some O.C. would probably be far better for my long term health.  The locals will be a whole lot more forgiving of some burning eyes than a knife buried in one of their throats.

Just like I teach my students here, one has to solve not only the initial violent encounter, but the secondary problem with the police and the criminal justice system.  In other countries, the “secondary problem” won’t likely be a generally fair trial by a jury of your peers; it might be an angry mob.  You aren’t prepared unless you can handle that issue as well.  Walter Mitty-like fantasies of cutting throats and throwing knives in the gutter to make a stealthy escape aren’t very productive.  Don’t delude yourself.  You aren’t Jason Bourne and you won’t get away with it.  Make a realistic assessment of your environment and your abilities and plan accordingly.

Back to regularly scheduled article posting on Friday!

If you would like to learn more about international adventure travel, check out my book Choose Adventure.