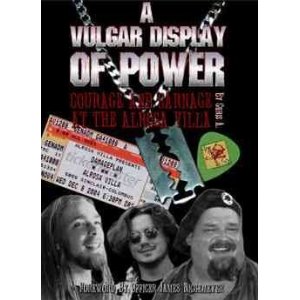 I’ve been studying the active shooter phenomenon for a long time.  The one active shooter event that has occurred closest to where I live isn’t commonly discussed in the literature on the topic.  The event to which I refer is the 2004 shooting at the Alrosa Villa nightclub in Columbus, Ohio.  During that shooting, a crazed, schizophrenic, former marine killed heavy metal legend Darrell “Dimebag” Abbott as the guitarist played on stage.  The gunman also killed the band’s security director Jeff “Mayhem” Thompson and roadie Erin Halk.  Two other fans were shot as well.

I took an interest in the story, not just because of the close proximity to where I live and work, but because I once worked with one of the victim’s mother.  I only recall meeting Erin Halk on one occasion, but I worked with his mother for several years.  Erin was killed when he courageously attempted to disarm the shooter after he killed “Dimebag”.

As far as active shooter events go, this one is somewhat of an anomaly.  The shooter had several targets he wanted to kill and he single-mindedly attacked.  He fought off numerous people who attempted unarmed resistance, had a pistol malfunction (and cleared it), and went on to fire 14 total shots.  He hit his intended target with all 14 rounds…not a single miss was recorded.  The shooter also took a hostage, which is fairly rare in active shooter events.  His rampage lasted more than four minutes and was stopped by a blast of 12 gauge 00 buckshot to the face from Columbus police officer James Niggemeyer’s shotgun.

The author, Chris Armold, provided an amazingly detailed account of the events leading up to the shooting as well as the shooting itself.  Minute-by minute accounts from numerous witnesses describe the actions that all the participants took.  The author included crime scene photos as well as diagrams showing the locations and movements of everyone involved.  The book’s forward was written by the police officer who killed the shooter.

Readers who appreciate heavy metal history as well as anyone looking for insights into the mind of an active shooter will appreciate this book.  It moves very quickly and provides a level of detail not often seen in most active killer narratives.  It’s definitely worth reading.

The book is available at Amazon.com