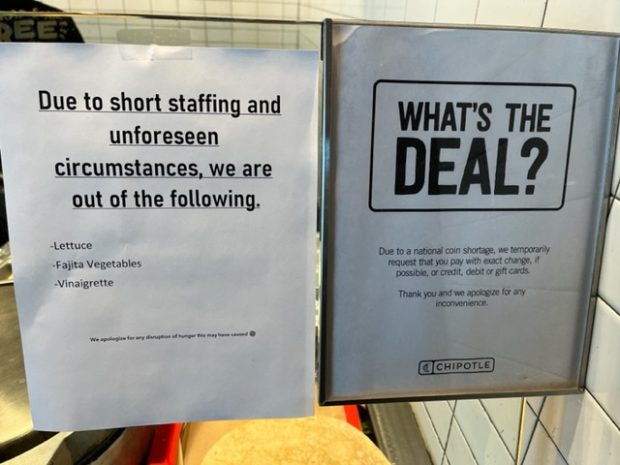 I was once on a snorkeling excursion in Aruba.  On the boat, I heard an older couple speaking Spanish with a very distinctive Argentine accent.  They were the only Spanish speakers on the boat and seemed a bit confused with the captain’s English snorkeling instructions.

I introduced myself in Spanish and translated the captain’s instruction for the couple.  We began chatting in Spanish.  They told me they lived in Bariloche, Argentina, but were trying to get residency in the United States.  Bariloche is a beautiful, high dollar ski resort town.  I had visited the city on past trips to South America.

The couple wanted to move to inland Florida.  I was kind of confused.  I asked them why they would leave their beautiful home to live in a Florida swamp.  The woman replied “Because everything works in America.”

She went on to describe how in Argentina, none of the utilities worked reliably, food supplies were inconsistent,  the roads were bad, and  government corruption was rampant.  She said that as the couple aged they learned to appreciate the boring reliability of an American existence.

The woman had a good point, but things have changed significantly in the five years since I had that conversation.

I’ve been traveling quite a bit all over the United States.  So far this year I’ve taught or taken 37 days of out-of-state classes.  I was in eight different states last month.  In addition to my busy teaching schedule, I’ve taken two short vacations in Florida and one in California.  I’m starting to think that the United Sates is rapidly becoming a third world country.  The things that once “worked” don’t work the same way anymore.  The decline is stunningly similar to what I’ve experienced in my travels in the developing world.

Here are a few things I’ve noticed in the last couple months of my domestic travel.

Airline issues– Up until about five years ago, when taking a flight in South America or Africa, one had to call the airline the day before the flight to ensure that the flight was still scheduled.  The flights were notoriously unreliable and the airlines wanted to avoid dealing with irate customers at the airports.

I’ve flown 46 flights this calendar year.  Twenty-nine of them were delayed or cancelled.  American airline reliability is now no better than some of the worst airlines in rural Africa.

Police uniforms- In the developing world, cops have very inconsistent uniforms.  They often wear jeans with a uniform shirt.  They lack equipment that American cops would consider mandatory.  Seeing a cop with only a handgun and no ancillary gear is really common in third world countries.

Last month I was stopped for speeding in rural Oklahoma.  The cop approached my car.  He was wearing a polo shirt and khaki pants.  No body armor.  No camera.  He was wearing a leather trouser belt instead of a duty rig.  He had a Glock in a thumbreak leather pancake holster and a police radio hanging off his trouser belt.  Nothing else.  No OC spray.  No Taser.  No handcuffs.  No baton.  No flashlight.  He looked like a security guard from El Salvador.

The cop was very nice and graciously let me off with a warning.  Given the uniform he was wearing I half expected him to solicit a bribe like his third-world counterparts.

Gas station irregularities.  I was driving in rural northern Texas and needed to stop for gas.  I pulled off the highway and up to a gas pump.  The attendant came out of the station to tell me that the station had no gas and wouldn’t be getting anymore for several days.

I went across the street to another station.  All the pumps had signs stating that the credit card processors were all broken.  It took stopping at a third station to get my gas. 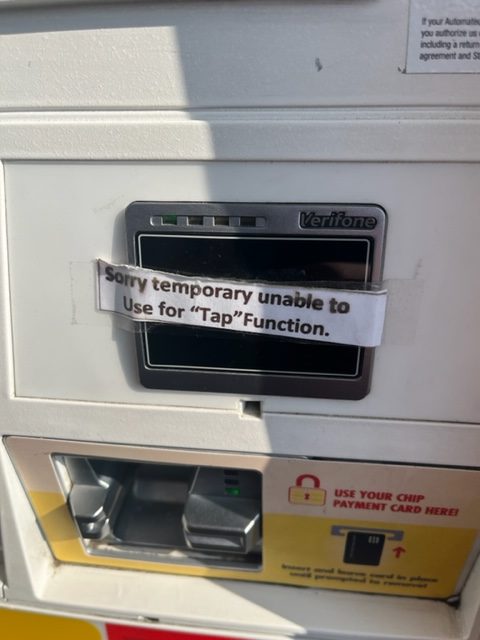 A week later, I stopped at a gas station in rural Arkansas.  They had functioning gas pumps, but I noticed the doors to the store were propped open and fans were blowing.  I walked in to use the bathroom and the attendant apologized for the lack of air conditioning.  He told me that the station’s aircon had been out for a few days and they couldn’t schedule a repair person to come fix it.

I proceeded to the restroom and saw this sign over the toilet. 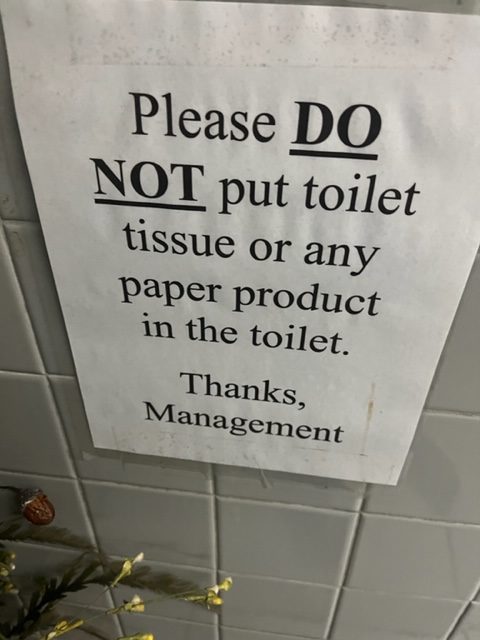 Such signs (coupled with a small trash can next to the toilet) are commonplace in South and Central America where they have substandard plumbing and water pressure.  I’ve never seen one in the United States.

On my way home during the same trip, I stopped at a gas station in Louisville, Kentucky.  I tried my credit card and the machine flashed a message stating “see attendant.”  I went inside the station.  The attendant told me that none of their pump credit card readers had worked “for weeks.”  He had no idea if they would ever be repaired.

I would expect such conditions at a third world gas station, but I’ve never seen so many gas station issues in the United States.

Hotel Problems- I stayed the night at a hotel in Memphis, Tennessee on a trip to Ohio.  The hotel was cheap, but promised a hot breakfast.  When I went to the common area to eat the next morning, I found it locked.  The hotel worker said that they haven’t had hot breakfast since Covid began.  They can’t find the staff to cook and man the breakfast station.

I’ve noticed that even in nicer hotels, there is no air conditioning in the hallways, stairwells, and common areas.  That’s a common money saving trick in the developing world, but I don’t remember ever encountering it here.

I was checking in to a Holiday Inn Express near Little Rock, Arkansas.  The front desk person answering the phone told all the callers that the reservation system was down nationwide and they would have to call back tomorrow and try to reserve the room again.

Having been tricked by the lack of breakfast in the Memphis hotel, I began packing my own breakfasts.  In a nice hotel in Boca Raton, Florida I went to the lobby to get some coffee to accompany my packed breakfast.  No luck.  All of the hotel’s coffee makers were broken.  When have you ever seen that in the United States?

Most American hotels are still not providing room cleaning on a daily basis.  I’ve spent some time this year in both Mexico and Colombia.  Those developing world hotels at least had daily maid service.  Not in America.

Food shortages–  Last weekend I taught near Dayton, Ohio.  I stopped at a local Chipotle to get some food.  These signs were hanging over the cash register.

When spending time in Bolivia, Cuba, Tanzania, and Cambodia I became used to restaurants not having items that were listed on their menus.  I don’t recall ever dealing with that problem here in the USA.  This national restaurant chain restaurant was out of coins, salad dressing, lettuce, and vegetables.  Not very encouraging.

The grocery stores I visited in Colombia were better stocked than most of the places I’ve shopped in the last few months.

Heightened security– In poor areas of the developing world, stores keep valuable items behind the counter to prevent theft.  I’m seeing more and more security countermeasures being employed by grocery stores and carry outs here as well.  I stopped at a carryout near Los Angeles and was shocked to find that all the refrigerated cases were secured with padlocks.  The store clerk said that the shoplifting problem is so bad that they couldn’t leave the beer, milk, and Gatorade unlocked.

It reminded my of this convenience store I visited in a dodgy area of Medellin last month.  All the goods were behind bars.  You told the clerk what you wanted and he would pass the items to you through the iron bars after you paid for them. 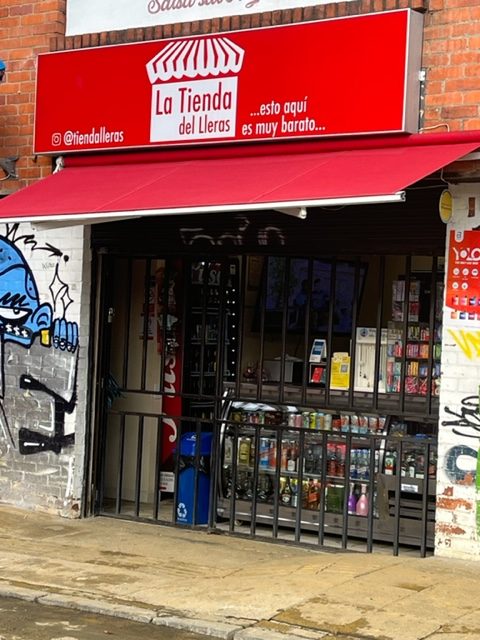 One characteristic of the developing world is that all of the residents have lost complete faith in their police officers.  The cops are corrupt, scared, or ignorant.  They don’t do much for the local populations.

Residents with money hire private armed security guards to keep crime out of their neighborhoods.  A couple years ago, I predicted that this would soon become a trend in the USA as well.  My prediction is coming true.  I just read this headline today Crime in New York Causes a Block to Hire Armed Security.

I don’t know what to think of these disturbing changes.  I don’t know how to fix things.  I think it’s only going to get worse in the future.  Within the next decade, it’s possible that the United States will be downgraded to an economic “second world” nation.  All the signs are here.  Pay attention and have a plan to live a far less luxurious lifestyle in the future.

I never thought I would be considering my travels in the developing world as critical training and experience for navigating everyday life in the USA.  I predict a rough ride ahead.

My Argentinian friends were wrong.  Not everything “works” in America.