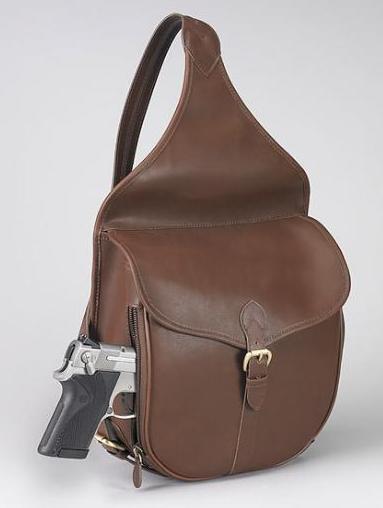 Let me get this out of the way first.  I am not an expert in the subject of carrying a gun in a purse.  I have never once carried a purse, let alone one with a gun inside.  I probably will never in my life have such occasion to carry a gun in a purse.

Does that mean that I don’t have any useful knowledge to share?  Not entirely.  While I am not the best person to tell you about purse carry, I have extensively studied incidents where purse carry became problematic, leading to an accidental or negligent discharges.

Let’s look at each one of these factors in a little more depth.

#1 Carrying a gun that isn’t drop safe or carrying the gun loose in the purse without anything protecting the trigger.

I’ve seen quite a few recent news articles describing how guns in purses just “went off.”

Guns don’t just “go off”.  I’m going to go out on a limb here and say that these incidents happened because the firearm’s trigger was uncovered and something got caught inside the trigger guard.  When the woman moves the purse, that “something” moved the trigger to the rear thus firing a round.

The type of gun carried is an additional factor.  Some older and cheaper guns are not “drop safe.”  That means that if the gun falls and hits something hard it may go off.  I’ve seen a lot of cases where a woman drops her purse and the gun carried inside fires.

Most of the weapons that are not drop safe tend to be guns that are really old or small semi-automatics that are very cheaply made.  Take a look at a couple of examples:

Woman In Starbucks Drops Purse With Forgotten Gun Inside, Shoots Friend In The Leg

Woman, 80, shot in leg when gun falls out of her purse

Ladies, please don’t carry your pistol loose in your purse.  Make sure that the trigger guard is covered by some type of a holster.    I would suggest carrying the purse gun in a holster that covers the trigger guard to prevent accidental discharges.

Pocket holsters are inexpensive and work well for this purpose.  My favorites are the DeSantis Nemesis and Superfly.  Both are quality holsters that will stay in place as you draw the weapon. 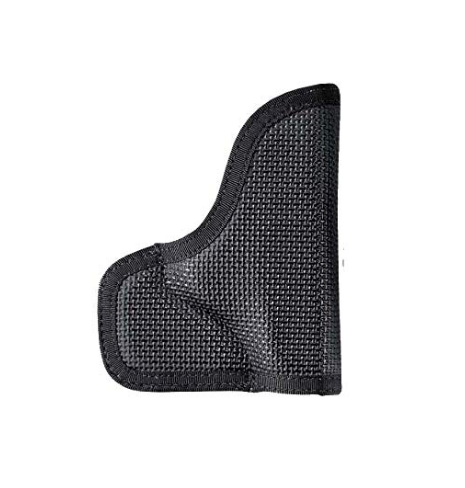 The DeSantis Nemesis holster will protect your gun’s trigger guard if you carry in a purse.

You should also know if your carry gun is truly drop safe or not.  If the gun is not drop safe, I wouldn’t carry it in a purse with a round chambered.  There’s just too much of a chance for a negative outcome if you drop your purse or engage in a violent struggle with a thief intent on taking the purse where the gun resides.

When you carry a gun in your purse, you should be very careful about how you handle the purse.  Throwing it, dropping it, or randomly stuffing it into a small space can all cause a negligent discharge if the gun isn’t drop safe and/or doesn’t have the trigger protected by some sort of holster.

#2 Carrying other items in the same purse compartment with the gun.

Even if your gun is drop safe and holstered inside a purse, over time you will find various bits of random detritus finding its way into the trigger guard of the gun if you carry any other items in the same pocket where the gun lives.  Take a look at this case.  It  involved a negligent discharge as the woman was placing another item in to the same purse compartment as the firearm.

Gun fires from inside Cape shopper’s purse at checkout

If you do choose to carry in your purse, the gun must go into a pocket BY ITSELF! No lipstick, Altoids, hair scrunchies, or dirty tissues to get wrapped up around the gun. It must also be in a holster that covers the trigger guard to prevent accidental discharges.  The best option is to buy a purse made specifically to carry a gun

#3 Leaving purse unattended and within reach of a young child

Here are the news accounts of a few more accidental shootings.  All of them involved little kids who found a gun in mommy’s purse and pulled the trigger.

A 4-year-old was looking for candy in her grandmother’s purse. Instead, she found a gun.

Mom fatally shot when son, 2, grabs gun from her purse in Walmart

If you carry your defensive firearm in your purse, you must retain positive control of that purse in every situation.  You cannot assume that your or another young child will avoid playing in your purse.

Because I’m hardly the proper authority on women’s purses, I will refer you to a few articles by more informed experts about choosing a proper gun purse.

Should I Carry in my Purse?

How Safe Is Purse Carry? Let’s Talk About It!

If you can’t or won’t buy a gun purse, follow the advice above and carry the weapon in a separate pocket with nothing else inside.  An even better option would be to carry your gun on your person.  There are lots of holster types that allow women to comfortably carry a pistol on their bodies, rather than in a purse.  You may have to try several to figure out which type works best for you. 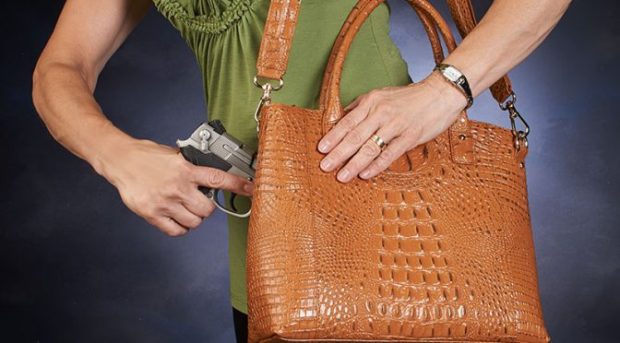 Every person is different.  Some of you may like the purse carry, some may go for a more traditional holster. Whatever method you use to carry your pistol, please make sure you practice drawing in all possible positions and using BOTH hands!  It would be a very bad day if you found out you couldn’t draw from your favorite holster while you were under attack, laying on the ground with an injured arm.

Be safe and PRACTICE!