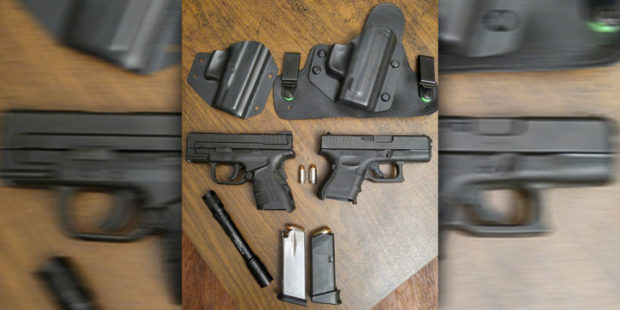 This edition of #Don’tDigTheRig advice is drawn from the submission made by Nick in Missouri.  Read about his CCW selection.  Nothing says “uninformed gun owner” more than carrying a subcompact .40 Glock or Springfied XD loaded with Hornady Critical Defense ammunition in an hybrid leather/kydex holster.

Let’s take a look at the guns first.

Very small .40 pistols are the most difficult for everyone to shoot well.  The snappiness of the recoil slows followup shots and inevitably creates a “flinch” when shooters fire significant quantities of ammunition in practice sessions.  I’m convinced that nearly everyone would be better served with the same weapon in 9mm.  The gun will hold more ammo, be easier and faster to shoot, and less expensive to practice with.

Using modern defensive ammunition, I’m not convinced that the .40 round offers significant ballistic advantages over the 9mm.  Perhaps the only people to which I would recommend carrying a subcompact .40 are police officers who want a backup gun that uses the same magazine as the primary duty weapon for interchangeability.  I don’t think it is super critical to have identical magazines for both weapons, but a case can be made for having the ability to do so.

Glock 27s are fairly reliable.  I used to carry one as a backup gun before I knew better.  Once I got some training and experience, I traded it for a Glock 26 in 9mm and never looked back.

What about the Springfield XD?  It’s main selling point seems to be “it’s not a Glock.”  Most people who initially buy them just don’t like Glocks for whatever reason.  They want something with Glock-like performance without Gaston’s name written on the slide.  It’s a bad choice.  The XD isn’t as good as the Glock (or several other different subcompact pistols).

Other folks attracted to the XD like the grip safety.  This crowd is often the new CCW carrier who doesn’t yet feel comfortable carrying with a loaded chamber.  They like that the grip safety provides an additional element of security for carry.  If you don’t feel comfortable carrying with a loaded chamber, you need more training, not a gun that makes shooting more difficult.

In my classes, the XD pistols are not horrible performers, but they do malfunction at a rate higher than I see with comparable Glock or S&W pistols.  The magazines seem to be a big issue.  I’ve seen more weakened springs and bent feed lips than in other manufacturers’ products.  Beyond that, the grip safety creates some issues with shooters who have small or weak hands.  A problem occurs when students have a suboptimal grip and don’t fully depress the grip safety.  Since the grip safety must be depressed in order to rack the slide, they can’t properly charge their pistols or perform malfunction clearing drills.

I know a lot of you XD users will say “That’s never happened to me!”  My question to you is: have you ever practiced after really fatiguing your grip to simulate a life or death struggle?  When is the last time you’ve worked support side one handed malfunction clearances?  That’s where I really see a lot of failures.  Most casual shooters will never see such a thing because they don’t train hard enough to induce the malfunctions.

All in all, the subcompact guns in .40 are difficult guns for anyone but a true expert to shoot well.  Unfortunately, most of the folks who choose them as a defensive sidearm don’t have enough experience to understand what they don’t understand.

Next issue, the Hornady Critical Defense ammo.  I really don’t understand the fascination with this load.  In some calibers (.22 magnum) the round works great.  In some calibers (.380 acp), the round performs adequately.  In service caliber weapons, the critical defense almost always performs significantly worse than the best performing brands of ammunition.  If you like Hornady, the Critical Duty is almost always a better choice.  The Federal HST and Speer Gold Dot are both significantly better performers across every caliber and bullet weight.

It seems to me that the uneducated flock to the critical defense round merely because it is something different.  They put a lot of hope into that polymer plug.  Unfortunately, it doesn’t work as well as advertised.  Once shooters become educated and actually look at ballistic tests, they inevitably dump the critical defense ammo.

I’ve written about hybrid holsters before.  I don’t like them at all.  While they may be comfortable, I’ve seen significant problems with them in my training classes.  The hybrids that use some type of neoprene backing will occasionally “lock up” when the shooter is trying to draw.  The neoprene is so flexible that pressure from the body pushes through the backer and collapses it up against the gun.  The pressure from the shooter’s own fat or muscle tissue drives the gun into the kydex shell and makes it difficult to draw under stress or when shooters attempt to draw while moving.

Again, I know I’m going to get a bunch of “that’s never happened to me” comments.  Have you ever tried to draw your gun while sprinting away from your attacker?  Most of you haven’t.  People don’t know what they don’t know.

The hybrid holsters with the leather backer tend to lose retention over time.  The overly large leather sweat shields start to droop.  I can’t tell you how many shooters I see who initiate their re-holstering process by pointing the muzzle of their guns at themselves while lifting up a sagging sweat shield that blocks the holster mouth.

Stay away from hybrid holsters.  Stay away from Springfield XDs and subcompact .40 pistols of any brand.  Drop the Hornady Critical Defense ammo if you carry a service caliber pistol.  Your life will be greatly improved.