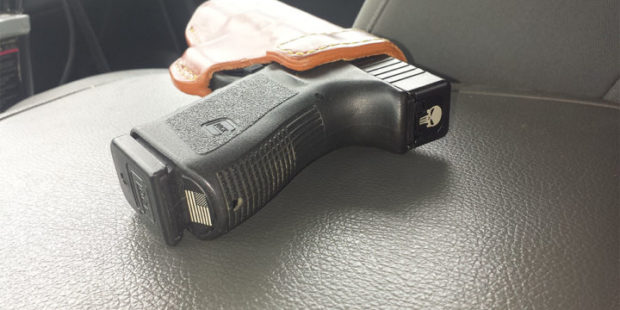 This installation of #Don’tDigTheRig is about Bobby’s Glock 23 and leather IWB holster.

I actually don’t have any problem with either the gun or the holster.  Although I think most folks would be better served by a 9mm Glock 19 than the .40 Glock 23, the 23 is still a reliable and useful gun.  My only caution about the 23 (or the 19 for that matter) is that the older versions of both weapons have a very narrow slide lock spring (the L-shaped spring that holds the “takedown lever” in).  If you have one of those narrow springs, replace it with the upgraded wider spring.  I’ve seen several of the narrow springs break over the years.  For the astronomical price of $1.00, you can ensure your gun will remain reliable for many more years.

My problems with this gun have nothing to do with inherent reliability or stopping power.  My issue is the “Punisher” logo on the back plate and the American flag on the aftermarket “butt plug.”  Both could be used against you by a malicious prosecutor after a defensive shooting.

Don’t think that could happen?  What about the recent police shooting in Cincinnati?  A white cop shot a black motorist he stopped for an equipment violation.  The cop was charged with murder.  One of the issues that came up at trial was the fact that the officer was wearing a T-shirt with a rebel flag on it underneath his body armor on the day of the shooting.  If the prosecutor will bring up your underwear in a trial, don’t think your gun decorations will get a pass.

An even more relevant case is that of the Mesa Arizona police officer who shot a suspect with his personally owned (but departmentally approved) AR-15 rifle.  There were words written on the inside of the rifle’s dust cover that say “You’re Fucked.”  The attorney hired by the suspect’s family said this about the rifle:

“That statement tells me this is a person who’s enthusiastic about killing people,” Marc Victor, lawyer for Sweet and her late husband, argued. “That’s what that inscription means.”

You really don’t want to be painted as a “person who is enthusiastic about killing people” in any lawsuit or criminal proceeding following a defensive shooting.

How might a prosecutor use the logos displayed on Bobby’s Glock 23 against him?  “The Punisher” logo is easy.  The prosecutor will allege that you embrace the idea of extra judicial punishment and killing so much that you willfully placed the Punisher logo on your defensive firearm.  Even if your shooting is legally justified, a misguided or unethical prosecutor might use the logo to convince the jury that the shooting was your hateful attempt to live up to the heroics of the comic book character you placed on your weapon.  Not good.

Who could turn an American flag into evidence against you?  Have you considered that you might have to shoot an illegal immigrant?  The narrative the prosecutor will make to the jury is that you are some type of racist, nationalistic, bigot who shot the “victim” for merely being born someplace other than the United States.  Again, it’s an argument you don’t want to have.

Will logos like this automatically become an issue?  No, not always.  But why take the chance?  It’s best not to give the other side any ammunition to use against you.  Keep the logos off your gun.