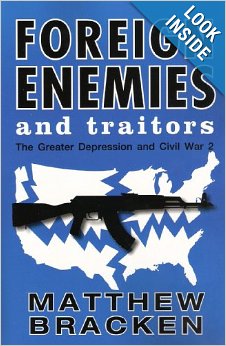 The third book in Matt Bracken’s Trilogy “Enemies Foreign and Domestic” is available now through the end of the month as a free kindle download.

Foreign Enemies and Traitors is a fast paced novel about a future we all could be facing.  I really enjoyed it and think you will too.  From the author’s synopsis:

“Foreign Enemies And Traitors” is set in the near future in an America that is creeping steadily toward socialist tyranny, in the midst of the second Great Depression. A year after earthquakes have devastated the Tennessee Valley, survivors are resisting demands by the federal government to relocate to FEMA refugee centers. United States National Guard units have proven ineffective at forcing these survivors out of the earthquake-damaged regions, due to their reluctance to employ deadly force against fellow Americans. As a result, the president has invited so-called foreign peacekeeping battalions to do the work of forcibly relocating the holdouts. The novel follows a small group of determined survivors in their resistance to the foreign enemies, and the American traitors who are their allies.”

Pick it up now from the link below while it’s still free!  And consider purchasing some of Matt Bracken’s other excellent books while you are there!