Most gunwriters are idiots.  There.  I’ve said it.

The majority are writers who have an interest in shooting.  They aren’t shooters who have an interest in writing.  There is a big difference between those two types of people.  Some gunwriters (like Dave Spaulding and Massad Ayoob) are true experts in their field. Most are not.  I’ve had several well known gunwriters as students over the years and I’ve been universally unimpressed with their performance.

The big problem occurs when new shooters look to the gunwriters as “experts” and actually pay attention to what they write.  The bad information starts to spread like a disease.

Yesterday I saw an article written by a fairly well-published gunwriter that made me want to strangle someone.  The article was titled “The “Center Mass” Myth and Ending a Gunfight”.   It was written by Jim Higginbotham.  I’ve never met the man, nor do I know anything about him.  He may be a perfectly nice fellow with only the best intentions, but the horseshit he spouts is likely to get someone killed.

Read the article for yourself (linked above).  It starts out pretty good, dispelling a lot of the common myths about the “one shot stop.”  Then it devolves into utter nonsense.

The author starts down a bad path when he writes:

“A famous Colonel Louis LeGarde once wrote what is considered “the” book on gunshot wounds. 65% of his patients shot through the lungs – with rifles! – survived with the predominant treatment being only bed rest!”

I have the book he mentions.  Most shooters have never heard of it.  “The” book on gunshot wounds was published in 1916!  The author doesn’t mention that!  Do you think ballistic technology might have improved a little bit in the last 100 years?  Please don’t think that if you are shot in the lungs with a modern handgun bullet, you can just lay around in bed for awhile and be fine.  The predominant treatment in 1916 WAS bed rest….BECAUSE THEY DIDN’T HAVE THE MEDICAL TECHNOLOGY TO FIX THE DAMAGE! 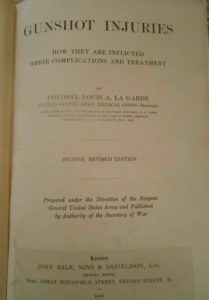 The title page of the definitive stopping power book referenced by Mr. Higginbotham. Note the publication date at the bottom…

When a writer uses 100-year old research (mostly done by shooting dead cows) to support his pet theory, I get a little worried.  The article then got even worse…

His next statement is absolutely baffling.  He writes:

Really?  Someone can’t do math.  He seems to think that one expanded 9mm bullet is about the same as a .45 ball round.  He also thinks that it takes 3-4 expanding 9mm bullets to equal the effects of one expanding .45 bullet.  Has he ever done any ballistic testing at all?  Let’s look at the tables:

This a screen capture from Federal’s Wound Ballistic Load Comparison site.  Look for yourself.  Using one of the best rounds on the market (the Federal HST), I compared the gelatin results for the 147 grain 9mm load and the 230 grain .45acp load.  Both had exactly 12 inches of penetration.  The 9mm expanded to .85″.  The .45 expanded to .98″.

Presumably the .45 ball does not expand and remains .45″ in diameter.  How does .45 = .85?  It doesn’t.  And how do three or four projectiles measuring .85″ equal the damage created by a single projectile that expands to .98″.  The math just doesn’t work out.  But if a new shooter didn’t know where to go to find the true facts, he ends up believing this gunwriter’s “40 years of experience”.

The final straw was when the author points out his “general formula” for predicting how many rounds it takes to stop an attacker.  Here it is:

Did he just make this shit up? He doesn’t mention where he gets his data. It just comes from “40 years of observation”. I don’t know what he’s observing, but it isn’t real life!

I studied and documented nearly 1800 shootings and I have the real numbers for these calibers. Average number of rounds before incapacitation:

You can see the report on my study HERE.  Not quite the same, huh? How many uneducated people are going to believe the horseshit this author makes up just to sell articles? How many of those beliefs will get someone killed?

I don’t care what you carry for self defense.  My research shows that there really isn’t much of a difference at all between the service caliber handguns.  Pick what you shoot well, not what a misinformed gunwriter tells you that you need.

As I’ve stated before…choose your “experts” wisely.  Your life depends on your decision!