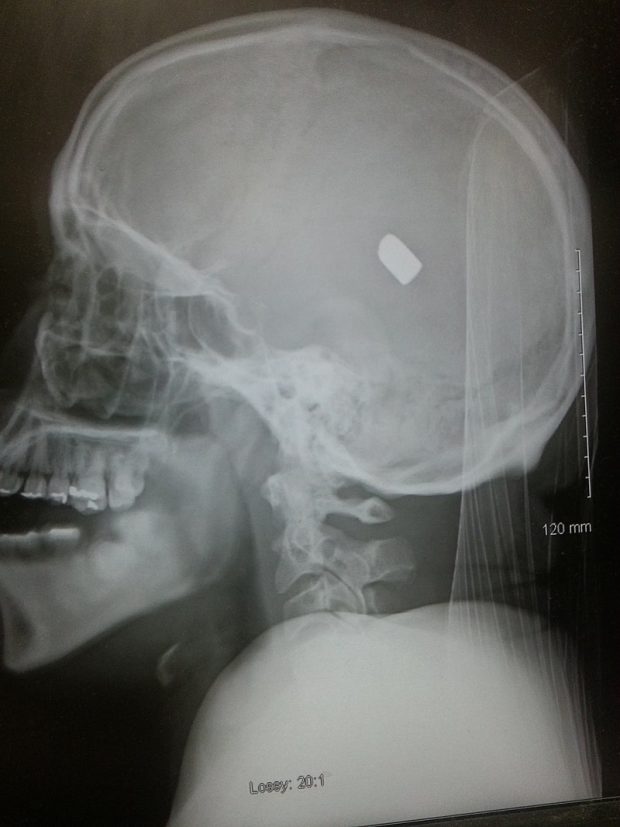 I’m obviously typing this article, so I apparently survived.  I have a hard head and a tiny brain.  There wasn’t much damage.

Let me tell you what happened.

I was teaching at Andy Stanford’s Surgical Speed Shooting Summit in Camden, Tennessee last Sunday.  We were on an outdoor range.  I had just finished up my block of instruction and was acting as an AI working the line for Micheal Green of Green-Ops as he ran the students through some shooting drills.

Suddenly I felt a hard impact to the top of my skull and a small amount of blood began running down my face.

A bullet had struck something in the backstop and ricocheted up and back toward the firing line.  When the ricochet lost energy, it fell straight down from the sky and landed on top of my head.

As I couldn’t see the injury, John Johnston from Citizens Defense Research and Ballistic Radio cleaned the wound and palpated it to ensure that there were no remaining embedded bullet fragments.  I held pressure on the wound with a gauze pad and the bleeding stopped in a couple minutes.

I ended up with a little bump and a small cut.

I’ve written about the importance of inspecting your backstop before shooting in the past.  I did not see any obvious hazards in this backstop and none of the other students caught any rounds from the berm.  This was just one of those freak occurrences.  We had 15 students shooting fast on the line.  One student’s bullet could have even struck another bullet in flight, spinning the ricochet up and into my head.  I’ll probably never know how it happened.

I generally recommend that my students wear hats on the range, primarily to keep a hot shell casing from falling behind the student’s safety glasses.  I wear very tightly fitting glasses and am not worried about that issue.  I hate wearing hats.  My head gets really hot and I find hats distracting.  I usually don’t wear them on the range or anyplace else unless the weather is below freezing.

I may alter that practice.  A hat wouldn’t have cushioned the impact, but the falling projectile probably wouldn’t have cut my scalp through the hat.  I don’t really need anymore scars.

Learn from my experience so you don’t have to bleed like I did.

Skull x-ray just to liven up a wall of text. Not my injury.