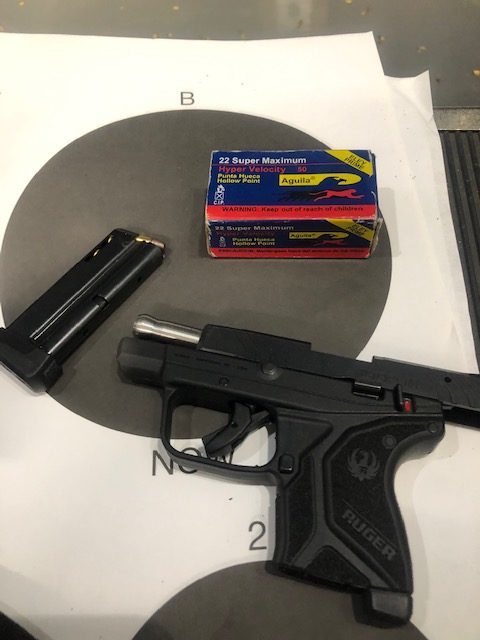 I picked up a new Ruger LCP II in .22 long rifle last week.  I’ve owned the same gun in .380 acp since it was introduced.  It fits the small niche of a “back pocket” gun better than any other.

The downside of the .380 version of this gun is the snappy recoil.  Even though it’s only a .380, the recoil is nasty in the LCP.  I really hate shooting it.  Its .22 brother was much more enjoyable to take to the range.

The gun came with a Ruger branded pocket holster and one magazine.  I bought a couple spare mags  and hit the range.

I fired the gun straight out of the box without any cleaning or lubrication.  I fired 80 rounds at a bullseye target at 20 feet.  I shot single shots, pairs, and triples from the ready position with both hands, right hand only, and left hand only.  I was actually surprised how well it shot. 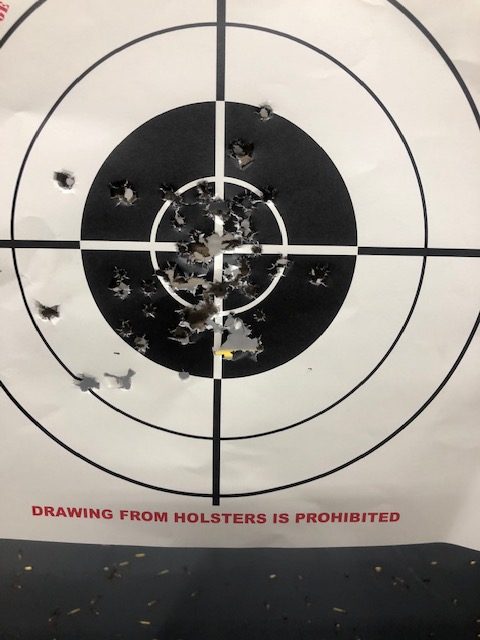 A surprisingly nice grip despite being barely able to see the front sight. Eighty rounds fired rapidly from 20 feet.

The first mag I fired was loaded with CCI Stinger ammunition.  That mag had three malfunctions, all failures to feed where the loaded round hit the chamber “nose up” and stopped.  The Stingers had a lot of muzzle flash out of this pistol, but recoil was non-existent.  I don’t know if the gun just didn’t like the Stingers or it just needed a bit of a break in period before starting to feed properly.  After that first mag of Stingers, I didn’t have any further malfunctions.

I fired 70 more rounds in its first shooting session.   Trying to see how different loads worked in the pistol,  I fired one magazine of CCI Velocitors and then a mag full of standard velocity Remington 40 grain “Golden Bullets.”

After trying those rounds, I fired a box of Aguila “Super Maximum” hollowpoints.  They ran flawlessly and seemed to have about the same recoil impulse as the Velocitors.  Since I doubt that any hollowpoint bullets fired out of a barrel this short will expand in flesh, penetration and shot placement will be the key to “stopping power.”

Although I haven’t gel tested this round, I’m guessing it probably penetrates about as well as the Velocitors (my normal .22 carry round).  After I run a few hundred more rounds through the gun (I happen to have a couple bricks of these), I might end up using the Aguila round for my primary defensive load.

The only thing I didn’t like about the gun was its nearly invisible black front sight.  I will definitely paint my gun’s front sight with some bright orange paint before relying on it as a carry piece.

I’m also going to install the Tandemkross “Wingman” + four magazine extensions on a couple magazines.  Having a 15-shot pistol that fits in my back pocket seems like a pretty decent insurance policy for me.  I’ll let you all know how they function when I go shooting again later this week.

Assuming the gun stays reliable, I think I’m probably going to lock my .380 LCP in the safe and carry the .22 in situations where having a “real gun” isn’t possible.  I think I’d rather have 10 or 15 .22 rounds in my carry piece than six .380 rounds.  This is especially true given that I’ll be carrying the gun in the hideout role, where I probably won’t be carrying a spare magazine.

Overall, I really like the gun and think many of you will like it as well.  It seems like a great gun for people who want an extremely concealable carry weapon.  It will also appeal to folks who are recoil sensitive.  Pick one up if you feel inclined.  I’ll report back when I get about 1000 more rounds through it.