I spent all of last week attending Massad Ayoob and Marty Hayes’ Deadly Force Instructor class as a student.  We spent some time discussing the use of weapon mounted lights and the safety concerns associated with them.

It caused me to realize that I haven’t written about this topic in more than six years.  I’ve changed some of my views on the topic over that time frame, so I thought it would be useful to provide my readers with an update.

The primary issues we see in media reporting are when people using weapon-mounted lights accidentally shoot someone when they mistakenly pull the trigger when they intend to turn on the light for illumination.

For years there has been a constant stream of high level media “reporting” about the so called “dangers” of weapon mounted lights (WMLs).   Check out the links below for some examples:

Flashlights on guns can cause cops problems

All of these new articles make it seem that the gun lights are a real problem.  They aren’t.  The real problem is a lack of training.

Here’s the reality.  It’s easier to blame a series of negligent shootings on an “unsafe product” than it is to revamp woefully inadequate police training programs.  Before we can get into the issue of the lack of training with the weapon mounted lights, we have to first describe how grossly inadequate police firearms is in an overall sense.

The dirty little secret about police training is that it rarely happens.  If the common citizen knew how poorly trained the average cop is there would be far more criminal violence.  Most agencies have a wholly inadequate firearms training program.  In talking to cops around my state as a firearms instructor for the last 20 years, I’ve found that most departments do very little firearms training. Shooting more than 100 rounds per year is unusual.

In Ohio, officers only have to pass a 25-round ridiculously easy “qualification test” one time per year.  Beyond that, no additional police in service training is required.  Because the state doesn’t mandate in service firearms training, lazy police executives often say “The state says 25 rounds a year is all we need to do, so that’s all we will do.”

Here’s another part of the equation: with few exceptions, office-bound police administrators almost universally hate shooting.  It’s an arena where they can be shown up by the low ranking patrol officers.  It makes them feel inadequate.  It’s easier to sit in an air conditioned office with bars, stars, or eagles on their shoulders pretending to be competent than it is to actually acquire the firearms competency they need.  In training police officers all around the country, it is rare for me to see anyone above the rank of Sergeant (first level street supervisor) shooting in my classes.

I had one chief (who wasn’t even a bad shooter) actually tell me: “Guns are loud and dirty.  I don’t like them.”  How diligent do you think this chief will be when it comes to making his officers train with their pistols?

Cops in Ohio don’t have to shoot in low level light AT ALL.  All stages of the current qualification are shot in full light conditions.  Since the state doesn’t require officers to demonstrate their low light shooting skills, most departments don’t train them.

If the departments do actually train in low light tactics, they shoot a few rounds at a stationary target after some remedial instruction on flashlight shooting techniques and positions.  The officers generally fire a magazine or two using their flashlights or WMLs and then promptly forget the skill until a few years later when the cycle is repeated.

Besides a lack of a state mandate and “budgetary concerns” the other significant problem in police training is the instructor training/certification process.  In my two-week police firearms instructor course, the lead instructor made the statement:

“Every one of you was sent here by your department.  Your chief must think you will be a good instructor or he wouldn’t have sent you.  Who am I to disagree with his assessment?  I trust your chiefs.  Everyone will pass this course.”

So we have an “instructor” course taught by a man who was so fat that he couldn’t even demonstrate some of the required firing positions, with absolutely no standards, that everyone automatically passes.  The class was worthless.

But that is all the “training” that most of the police instructors get.  They think it’s the pinnacle of their education.  It isn’t.  Any commercial shooting school will yield better firearms handling skills and shooting abilities than most police “instructor” schools.  Yet few cops will spend their own money to seek out better training on their own.

The result ends up being that well-intentioned, but poorly trained “instructors” get minimal training time to pass on what little knowledge they have to officers who know (and often care) even less.

Is there any wonder why we have negligent shootings?  It’s not the fault of a flashlight switch.  It’s the result of non-existent or completely inept training.

Right now in my state, barbers require 1800 hours of initial training and 8 hours of continuing education each year.  Cops get certified after 737 hours and the state requires absolutely ZERO continuing in-service training.

Until cops start getting off their asses to seek training their departments won’t provide and/or the citizens start demanding more from the people carrying guns than those who style their hair, negligent shootings will continue.

Now, back to the specific issues pertinent to the weapon mounted lights in particular.

What can individual officers or agencies with limited budgets do to ensure that they handle weapons-mounted lights correctly and avoid negligently shooting someone?

WMLs are for shooting.  Handheld lights are for searching.

In last week’s class, Massad Ayoob brought up a very useful analogy to explain this concept.

Many of you have hunted with a rifle or taken a hunter safety education course.  If you were hunting with a rifle, would you use the rifle scope to scan for game, knowing that you would be muzzling the entire world with the loaded rifle while doing so?  It’s generally considered poor form among hunters to use the rifle scope to locate game.  Game is located with the hunter’s unaided vision or through binoculars.  Once the game is located, the hunter uses the scope to take the shot.

The “slob hunter” practice of searching with the rifle scope (and consequently the gun muzzle) is essentially the same practice as searching with a weapon mounted light and while simultaneously muzzling everything you look at.  Don’t do it.  Use the handheld light to find your attacker, then use the WML to take the shot if necessary.

Most of the negative news articles about weapon mounted lights involve police shootings.  How does the issue of WMLs affect the armed citizen?

I personally don’t carry a weapon mounted light on my off duty gun.  If I’m not wearing a uniform, there are a very small number of situations where I would be searching a dark area for a criminal.  Very few crimes happen in complete darkness.  The attacker needs enough light to identify and evaluate a potential victim in order to press the attack.  That amount of light is usually enough to allow me to identify the criminal and see my sights without additional illumination.  I don’t feel the need to carry a WML when out in public off duty.

I do have a weapon mounted light (Surefire X-300U actuated with the DG switch) on my bedside pistol.  If I am attacked at night in my home, it may be completely dark.  I think a WML is useful in conditions of absolute blackness.  But I also have a handheld light (Fenix P36R) right next to it.  If I have to leave my bedroom and search, I will use my handheld light just like I would if I was hunting a criminal in my police duties.

Bottom line?  Use handheld lights for searching.  Use weapon mounted lights for shooting.  Don’t blame the flashlight when you screw that up. 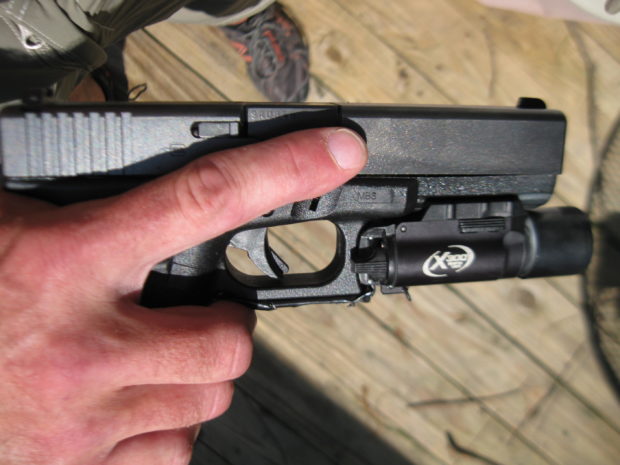