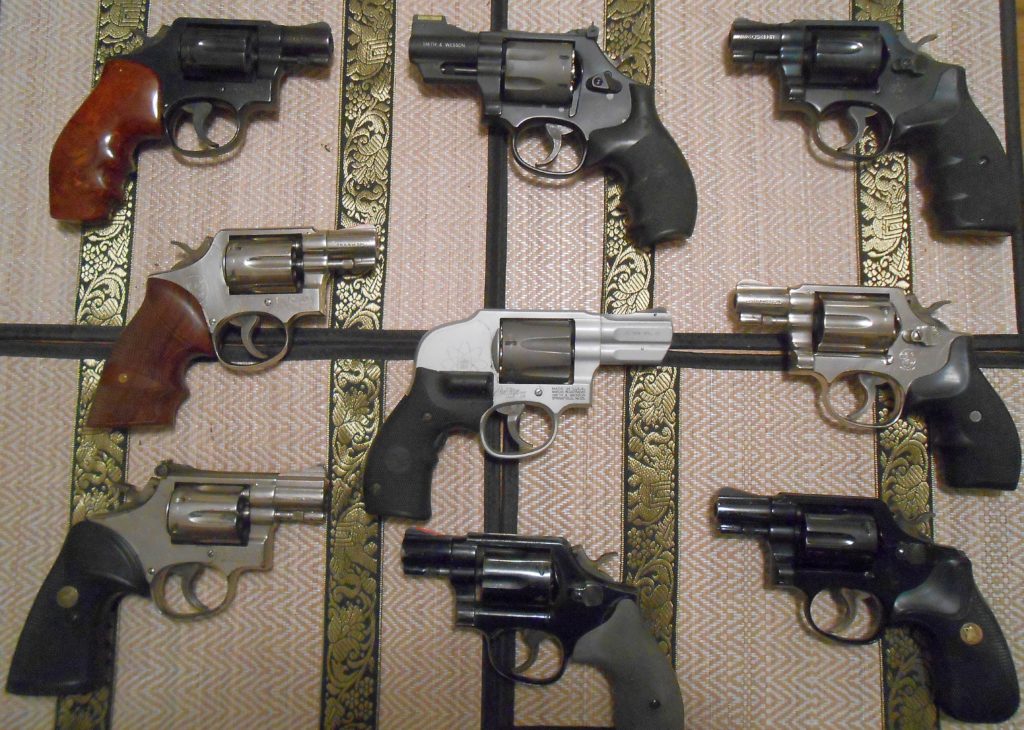 I may have a slight problem…an addiction to snub revolvers.  Oh, I love a good J-frame and carry one around almost daily. but my true passion is the J-frame’s almost unheard of larger cousin…the K-frame snub.

Many of you know all about Smith and Wesson’s K-Frame revolver.  The .38 spl Model 10 and the .357 Magnum Model 19 are some of the most widely used handguns in the world.  30 years ago, almost every cop on the planet carried one of those guns on his belt.  But the ones you saw on cops’ belts were the 4″ and 6″ barreled versions.  A lot of people don’t know that Smith made the same guns with a snub nosed 2″ barrel as well.  Handle one of those babies and you’ll be impressed.

Probably the best description of the snub nosed K-Frames was made by my friend Ed Lovette, a former CIA Operations Officer and author of the book The Snubby Revolver.  Ed says “It carries like a J-Frame, but shoots like a real gun.”  That’s a perfect description.  And Ed should know.  On his undercover assignments in South America and Africa he carried a 2″ Model 10 every day for personal protection.  He could conceal that gun much better than his issued Browning Hi-Power in the tropical heat.

A lot of folks are turned off by the tiny sights and grips on the J-frame revolvers.  They have heavy trigger pulls and, while easy to carry, are quite difficult to shoot well.  The K-Frame is the exact opposite.  It has very visible sights, a full sized grip, and uses the larger leaf spring in its trigger mechanism.  The leaf spring creates smoother and lighter trigger pulls in comparison to the coil spring found in the J-Frame snubs.  Recoil is noticeably lighter as well.

I recently ran a Model 10 snub against my J-Frame Model 342 in a head-to-head shooting test.  I used a very simple set of drills shooting on a 25 yard Bullseye target.  I fired one cylinder full from each gun on each the following exercises:

Check out the picture of my targets below.  With the J-frame, I kept 34 of the 45 shots (76%) in the black.  Three of my shots drifted into the “7” ring and one was outside the scoring rings all together.    With the K-Frame Model 10, I kept 45/54 shots (83%) in the black and ALL of the shots broke the “8” ring or better.  That’s a fairly significant increase in practical accuracy. 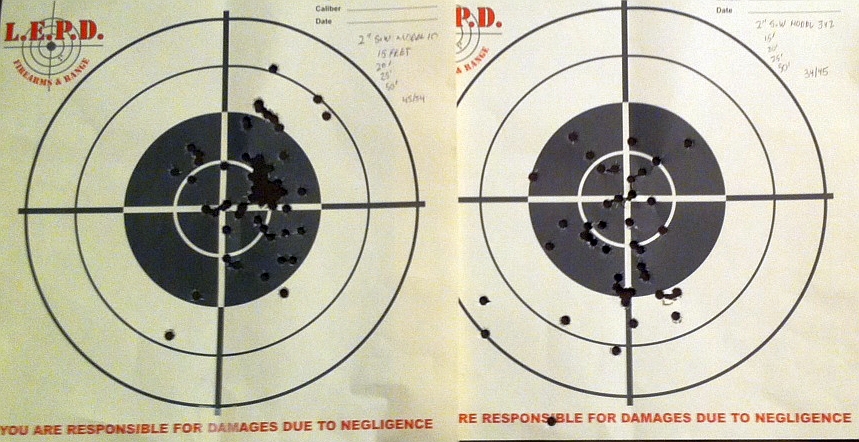 K-Frame on left. J-frame on right

Here’s something else to consider…

The K-Frame snub might be the ideal home defense weapon for a person who isn’t a “shooter.”  It is concealable enough to carry if necessary, but it can sit for years untouched in a dresser drawer with no worries about functionality.  It has a full grip and a short barrel, giving the shooter an incredible leverage advantage in a gun grab attempt.  The trigger pull is light enough that the infirm can still generally use the weapon.  And it holds six rounds instead of the usual five.  That’s tough to beat for a novice shooter’s home protection piece!

While the Model 10 and 64 snubs are the most common, there are some others you might consider as well.  For home protection, I like going even a step larger and getting one of the 7-shot L-Frame snubs.  Both of mine have scandium frames and are very light to carry, even if they are a bit thicker and harder to conceal.  The slightly longer barrel on these also means a slightly longer ejector rod.  That makes for more reliable ejection of empty cases than the shorter ejector rod that comes with the 2″ barreled J and K frames.

My favorite of all is the airweight K-Frame Model 12.  The all steel Model 10 weighs in at around 34 ounces.  The aluminum framed Model 12 is nearly a pound lighter at 19 ounces.  It’s a big difference when you carry the gun in a pocket or on your ankle.  I actually carry the Model 12 airweight in an ankle holster every day as my backup gun at work.  It’s small and light enough to carry on my ankle comfortably and it holds one more round than the more common J-Frame snubs.  What’s not to like?

In addition to the K-frame snubs, the Kimber K6 and the new Colt King Cobra fulfill a similar role.  They are both six shot all steel guns with barrels under three inches.  If you want to carry a revolver as a primary defensive firearm, one of these two or the Smith K and L frames are optimal choices.  Save the J-frame for a backup or hideout gun.

Take a look at the under-appreciated K-frame snubs.  You can find used ones in reliable mechanical condition (but likely with heavily worn finishes) on Gunbroker in the $300-$400 range.  They are cheaper than a lot of new J-Frame snubs and are tremendously easier to shoot.  Plus, if you folks buy them all up, I won’t be tempted to add another one to my collection.