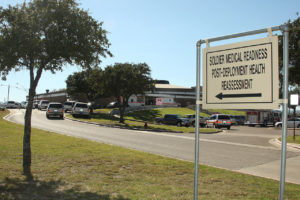 I was doing some active killer research and came across this excellent recap of all of the events that took place in the (first) Ft. Hood shooting.

Read this extremely detailed account of the Ft. Hood activer shooter (terrorist) incident. Whether you are a cop, soldier, or citizen, think about how you would respond in an event like this.

“Inside a nearby medical processing building, investigators found six empty magazines and 146 spent shell casings amid the blood and bodies. An additional 68 casings and three empty magazines were recovered in a grassy area where Hasan stalked fleeing soldiers.”

That’s A LOT of bullets fired! This isn’t the average incident with fewer than one magazine fired before the shooter takes his own life or flees. Does this fact make you think about your daily loadout?

“Munley said she couldn’t get a clear shot at the gunman at first, because so many soldiers were running behind him. “I did not want any friendly fire,” she said.”

“Shots slammed into a rain gutter above Munley, sending shrapnel into one of her hands. She could see the gunman closing in, she recalled, so she rose to take a standing shooting stance”

Hands get shot all the time in gunfights. How good are you at your one-handed and off handed shooting? What about one-handed malfunction drills?

“Munley said her Beretta 9 mm handgun jammed. She frantically tried to unjam her gun, she said, and “the shooter comes and kicks my weapon out of my hands.”

Guns jam all the time in gunfights. This is a bad position to be in. Know how to reflexively clear pistol malfunctions. Better yet, carry a backup gun and transition to it!

“Her Beretta skittered about three feet. She crawled toward it. “I notice he’s struggling or having some sort of problem with his weapon,” Munley testified. “He begins to walk in the other direction.”

Fortunately, the bad guy’s gun can jam too. He had a backup gun, but didn’t transition to it. That fact alone saved Ofc. Munley’s life.

“Todd said he ran up, kicked the man’s weapon away and flipped him on his belly to handcuff him. Reaching into Hasan’s pants pockets, Todd said, he found a formidable arsenal: six loaded magazines for Hasan’s semiautomatic, as well as a loaded, unused revolver and a cellphone.”

Don’t assume that a bad guy only has one gun. Approaching a downed person who isn’t clearly out of the fight is a dangerous act. Be careful and always think about his backup guns.

In an event like this it would also be smart to think about any explosives he might be carrying…either command-detonated or set on a timer. Again, be cautious on your approach!

“Richter said he sprinted out as Todd handcuffed the wounded major. He grabbed the major’s pistol, thinking he might need it if there was a second gunman. The major, a medical administrator, said the gun was jammed and its barrel was so hot from repeated firing that he burned his fingers.”

This is a smart man. Don’t forget “Battlefield Pickup” techniques. If you can get a better gun (or any gun if you are unarmed), do it. Know how to load, clear and shoot everything. How many of you could clear a malfunction and shoot a FN 5.7mm pistol? It’s not hard, but this isn’t a common gun that a lot of people see.  Just recognize that should you choose to use the shooter’s weapon, responding cops might think you are the shooter.  Not many armed citizens or off duty police officers run around with an AK-47 rifle.  If you “battlefield pickup” something like an AK, be very cognizant of the fact that cops will be coming.  As soon as the there is no longer a threat, drop the weapon and get your hands up so you won’t be shot by responding officers.