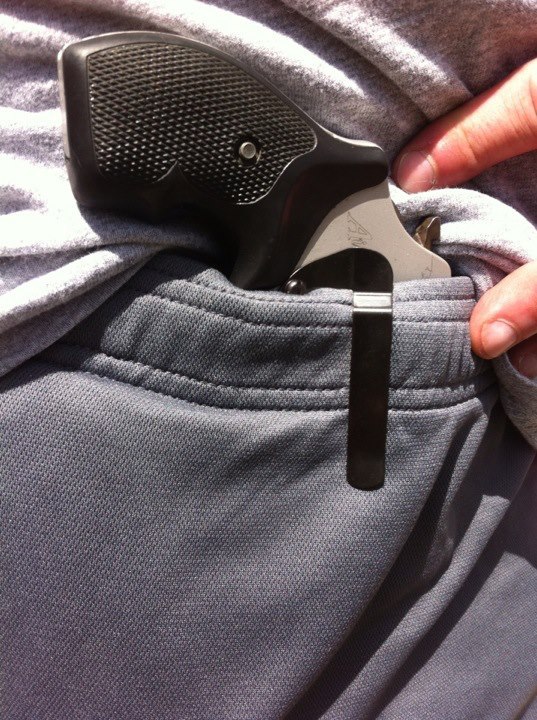 This article is a guest contribution from Henry “The Old Man from Tennessee.”  Henry has written several articles for my site in the past.  He is 91 years old and lives by himself up on a mountain in rural Tennessee.  Like many of you, Henry has been shooting all his life.  Also like many of you, Henry carries a .22 rimfire for a primary self protection piece.  He calls it his “Old Man’s Gun.”

Henry shoots his .22 revolvers almost every day.  He’s studied gunfighting history for a long time and uses a lot of the WWII- style point shooting techniques advocated by Sykes, Fairbairn, and Applegate. Henry has logically examined all the relevant issues and made a decision that’s best for him.  He doesn’t want any attention and he recognizes what works for him may not work for everyone.  He’s a deep thinker and wants to share his experiences with my readers.  Here are his thoughts on the subject of carrying light weight .22 revolvers for self protection….

Enjoyed your post surgery account of downsizing to the little .22s.  You are singing my song in that regard. Pack two 317s in front jeans pockets myself and do not feel at all under gunned for personal defense situations. Sixteen rounds without a reload. Jim Cirillo would approve I think.

Easy carry, easy conceal, very fast and plenty accurate. Hit the threat in chest and head with the firestorm. It will make him change his mind in a hurry. Personally, I do not use pocket holsters. Just put a crumpled up old sock in both pockets.  Keep the socks there all the time. Naked gun goes down on the sock.  Sock prevents gun muzzle from rubbing a hole in the pocket and also breaks up outline of the gun so it does not imprint. Easy to put hand in the pocket and on the gun. Makes for very fast, very easy draw.

If you have students that think naked carry like this is unsafe, a possible solution for them is to leave the first chamber of the revolver empty. Makes an unintended discharge go “clink” instead of “bang.” Cuts capacity by one, which is not too serious. Does not really slow you down much, as a second round can instantly be fired.

What I say is all based on my personal experience. It is what works for me and may or may not be suitable for others. I generally think only in terms of personal defense. I have shot hundreds of rounds in respectable groups on 3 x 5 index cards at ranges out to 21 feet. If the range is greater than that my recommendation is not to engage at all if you can possibly avoid it. Can say this about “burst fire” or the “firestorm”. Very easy to shoot accurate double taps with the little .22 revolvers, and rapid-fire multiple impacts like that have greater psychological effect on the recipient than single rounds.

What I call the “gunfighter drill” involves two quick double taps to the chest to disorient the threat followed immediately by four fast but deliberate shots to the head if the threat is still standing.

I think Henry’s on to something.  I would much rather go into battle with a guy who is carrying the .22 revolvers he shoots every single day than anyone with the latest and greatest Blast Master 3000 pistol that he’s never shot.  I hope this makes some of you think.  It’s not the gun that matters.  It’s the person doing the shooting.  I want to thank Henry, “The old man from Tennessee” for sharing his vast experience with all of us.

If you would like to read more of Henry’s wisdom, take a look at the articles below.

Some Thoughts on Situational Awareness

Some Thoughts on the Ruger LCR

Real World .22s for Self Defense