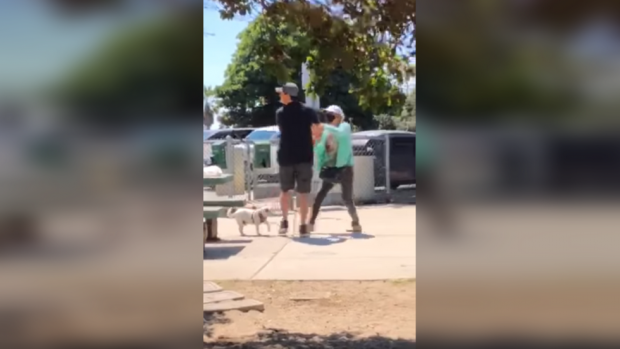 People are losing their shit.  It’s almost like the world has been turned completely upside down in a very short period of time.  In my police job, the calls about erratic behavior, mental illness, and alcohol/drug abuse have increased significantly in the last couple months.  There are a lot of mentally unhinged people running around and wreaking havoc.

There’s no escape.  Even if you don’t work with the mentally ill like I do, you may still be exposed to some of their irrational and violent behavior.  These people are everywhere and you will undoubtedly  encounter them.

A couple in a California dog park thought they were safe until a strange old woman approached them.  The nutty woman ranted about the fact that the couple wasn’t wearing masks at the outdoor dog park.  The couple told the woman that they were eating lunch at a picnic table with no one around.  There was no need for them to wear masks and it would be nearly impossible to wear a mask when eating food.

That excuse wasn’t good enough for the irate crazy lady.  She continued to berate the couple and then attempted to pepper spray the wife.  The husband intervened and took a whole can of pepper spray in the face.

For more information about this case, take a look at the links below.

You can also watch a cell phone video of the attack embedded below.  Link opens to Facebook.

These altercations are becoming more and more frequent.  Do you have a plan in the event that an irrational person threatens you with pepper spray?  You probably should.

Some of you might say “I’d just shoot him.”  Not so fast.  In general, using deadly force requires that a reasonable person be in fear of serious injury or death.  It’s going to be tough to show that pepper spray was a lethal weapon used against you when almost every police department in the country places the use of pepper spray at the LOWEST level on the use of force continuum.

In most police agencies, officers are required to pepper spray a resisting subject (if feasible) before  even considering using strikes against him.  Pepper spray sucks.  I know.  I’ve been exposed to it over 50 times in training and on the street.  It causes a lot of pain and some temporary blindness, but it doesn’t cause serious injury.

The standard argument I get from the “I’d just shoot him” crowd is that if the victim is disabled by the pepper spray, the criminal could disarm the victim and shoot him with his own gun.  It’s a roundabout argument for justifying a deadly force response, and it isn’t always valid.

In my opinion, if a criminal was using pepper spray and attempting to disarm his victim, it likely WOULD justify a lethal response. The problem is that the criminal actually has to be trying to take the gun for the victim to fear for his life.  We need reasonable, articulable facts that would lead a person in a similar situation to believe that a disarming attempt was immanent.  Mere possibility of an event happening isn’t enough evidence to keep you out of jail.

Take a look at the video above.  Do you think that her pepper spray was an attempt to disarm the couple and use their guns against them?  Clearly not.  Even if one of the two were carrying a gun, there was no demonstrable intent to press the attack after the crazy woman hosed the two people down.  This event was most certainly NOT a lethal force attack.

I think the first step to consider is retreating.  Most small cans of chemical irritant have a very limited range.  The small keychain type sprays only shoot about five feet.  The larger canisters that cops carry shoot a stream that is 10-15 feet.  Excepting the large fire extinguisher-style cans, you would be out of range of any commonly carried chemical spray if you could get at least 20 feet away.

In this situation, either of the two victims could have probably outrun the nutcase old woman.  Doing that may not be satisfying, but it might ultimately be the best (or maybe least costly) course of action if one wanted to avoid any further contact with the mentally ill woman. 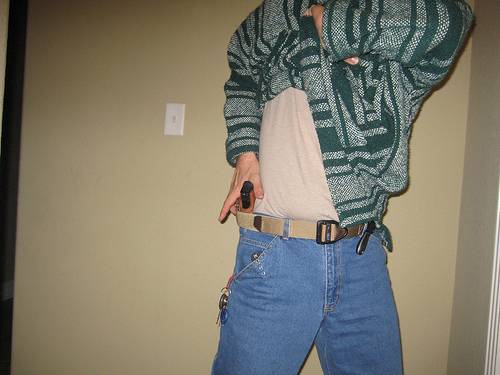 What about a counter attack?  In a situation like this, physical force may be a very good solution.  Just because you can’t legally shoot most people who attack you with pepper spray, doesn’t mean you must stand idlely by while a criminal assaults you.  Physical force to defend against a pepper spray attack would likely be judged favorably.

In this event, the husband was a foot taller than his attacker and was clearly physically superior.  If he punched the woman in the face as she was spraying, I bet the spraying would stop.  He could have also attacked her with the purpose of taking the pepper spray away from the woman.  Both actions would likely be deemed “reasonable” by a jury of your peers.  No one expects you to eat a full can of OC spray just because your attacker was an older female.  You don’t have to just “take it.”  You can most certainly act to defend yourself and stop the attack against you.

If you can’t escape, counterattack, or shield, recognize that you are going to be sprayed.  Know in advance how you will react.   You can usually continue fighting, but some people panic the first time they are hit with the spray.  Their panic leads to a freezing response that makes them unlikely to be able to defend themselves. The spray painful.  It makes you cough and your eyes burn.  But most of you can fight through the pain as long as you know what to expect.

With the police tear gassing of rioters leading every news program and newspaper for the last two months, I would expect more of these attacks in the future.  People are thinking a lot about tear gas and pepper spray.  Don’t be surprised when some of those thoughts turn into actions in a population with a large number of mentally-ill individuals.