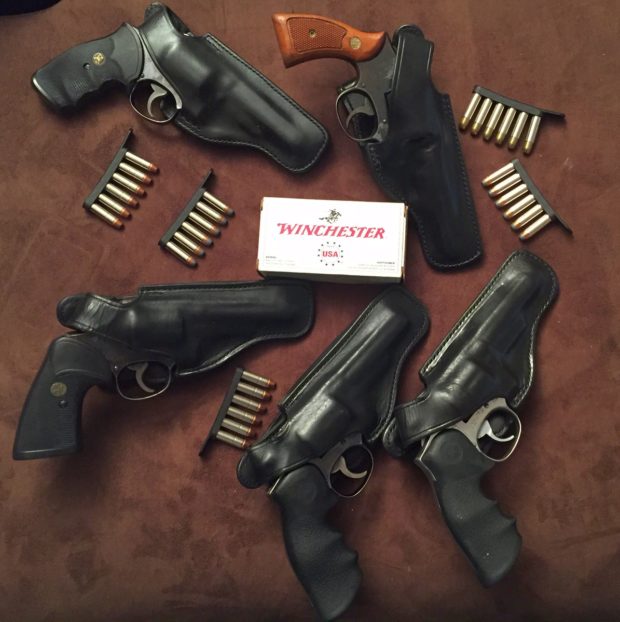 A few of the police trade revolvers I’ve picked up for cheap prices over the years. With holsters and ammo included, these five guns still cost less than the price of a single AR-15 rifle. Which would be a better bet in a survival situation: five friends with hidden .38 revolvers or one friend with that new AR-15 you put in the safe “just in case”?

Considering I’m planning several revolver courses for the coming year, I have revolvers on the brain.  It  seems that the proficient use of a revolver has become a dying art in this age of self-loading pistols.  I think that is a sad state of affairs and truly believe that many folks could be better served with a revolver as a home defense weapon, especially in the event of a serious economic or societal collapse scenario.  You know, like that Covid -19 outbreak everyone is discussing?

Think about if this pandemic flu gets bad.  People will be isolated in their homes.  Cops will likely be non-existent because they will all be either sick or quarantined after contacting people with the infection.  Do you think the criminals are going to stay inside to reduce spreading the virus?  Not a chance.  When the grocery stores no longer have food and the cops are spread very thin, the criminals will be out in full force.

I think a lot of people who don’t currently own guns will be looking for a home defense weapon in the near future.  What kind of gun would be a good choice for that person?

One could make the argument that a mid-sized revolver is ideal for an amateur gun owner.

The prime benefit of a revolver is ease of use. Don’t get me wrong, I think as a whole, revolvers are harder to learn to shoot WELL, but they have a far simpler manual of arms than the typical semi-auto pistol. The “ease of use” to which I am referring is the ease of loading, unloading, and getting rounds on target at close range. There are no manual safeties to forget, no magazine disconnectors to confuse people, and no slide racking to worry about. It’s literally as simple as “point the gun and pull the trigger.”

Those of you who are “tactical” will scoff at that statement. As a shooter, I understand. The problem is that not everyone is a “shooter.” If crime rates and desperation increase post-collapse, think about all the people unfamiliar with guns who will be forced by circumstances to rely on a firearm for protection. Is your elderly mother a shooter? What about your neighbor who works as a data analyst all day? Sure, given enough time and practice anyone can become proficient with a semi-automatic pistol or AR-15 carbine, but we may not have the luxury of either time or extended practice sessions in the event of serious social unrest.

I’d rather have a non-shooting friend, family member or neighbor armed with a .38 revolver and full confidence in his ability to use it, than give him a “superior” pistol whose controls are too complex for effortless usage by a novice tactician. The reality of the matter is that I can get an untrained person to a level of basic proficiency faster with a revolver than I can with an autopistol. That’s an important factor that few people in the gun world consider.

A second advantage of the revolver is its relative durability and the lack of maintenance required to sustain it. Revolvers don’t seem to malfunction as often as autopistols and don’t require as much lubrication to function. That doesn’t mean that revolvers are indestructible. I’ve broken more than my share of wheel guns over the years. I just don’t see them breaking or malfunctioning as often as my autoloaders.

A final advantage that revolvers have is an infinitely adjustable grip. Modern autopistols like the Smith and Wesson M&P and the Glock now come with adjustable back straps, but they still won’t fit every hand size. With a revolver, you can switch grips in just a couple of minutes. You can find an aftermarket grip that feels good in any size hand. Again, if you are looking to stash away a few guns for non-shooting friends or family members to use in a crisis, having the ability fit the hands of any person who might have to use the weapon is a desirable quality.

As far as makes and models to choose from, I would avoid the five-shot snub nose revolvers. Those small guns (Smith and Wesson calls them “J-frames”) are very easy to conceal, but are extremely hard to shoot well. Their heavier trigger pulls (they use a heavier coil spring as opposed to the larger guns’ leaf springs), shorter sight radius, and reduced capacity make them challenging for all but the most dedicated shooters. The untrained person would be much better off with a revolver that has a slightly larger frame and barrel length. For general home protection, concealment isn’t a primary concern.

I would recommend the Smith and Wesson “K-Frame” with a four inch barrel as a good place to start. K-frame models like the model 10, 15, 19, 64, 65, and 66 were the standard law enforcement sidearm in the USA up until the early 1990s. They are reasonably powerful, very reliable, and quite easy to shoot well. If you don’t care that the gun has a worn finish, you can still find former police trade-in guns available on the online gun auction sites for around $300 or less.

The Ruger GP-100, Security Six, Speed Six, and SP101 would be good choices as well. Those Ruger revolvers are about as indestructible as they come, but many people find their triggers to be a little stiffer than the Smith and Wesson guns. In both brands, you’ll find the same guns available in both .38 special and .357 magnum calibers. Either will do fine. You can shoot both .38 and .357 rounds out of the .357 magnum, but you are limited to using only the .38 special rounds in any gun of that chambering.

The added versatility of the .357 makes it the obvious choice in a survival situation. If ammunition is scarce, it might be useful to have a gun that fires two different calibers. The downside of this plan is the fact that guns chambered in .357 magnum caliber cost approximately $150 more than their .38 special counterparts.

I really like the Colt revolvers, but the vintage ones haven’t been made for quite some time. Finding spare parts and a person who has the skills to fix one is becoming increasingly difficult. That removes them from consideration for an ideal survival gun in my opinion.

The Taurus Judge gets a lot of press, but I think it is a poor choice as well. The general quality control standards in the Taurus guns I’ve seen come through my classes are significantly below those displayed by Ruger and S&W. The Judge is larger and heavier than the other revolvers I mentioned above. Ammunition availability is also an issue. There just isn’t as much .410/.45 Colt ammunition manufactured in comparison with the .38 special. Having a gun that you can’t feed isn’t very useful in a survival situation. Stick to the Smith and Wesson or Ruger revolvers.

In closing, I think the ease of shooting, simple manual of arms, durability, and low price make the revolver a great choice for a survival situation. You could pick up three or four used revolvers for the same price as a new semi auto pistol from one of the well-known manufacturers. That’s a huge force multiplier. Having the ability to arm a bunch of your non-shooting friends and family members in a crisis will be much more important to your long term survival than buying the one “perfect” spare handgun or carbine.