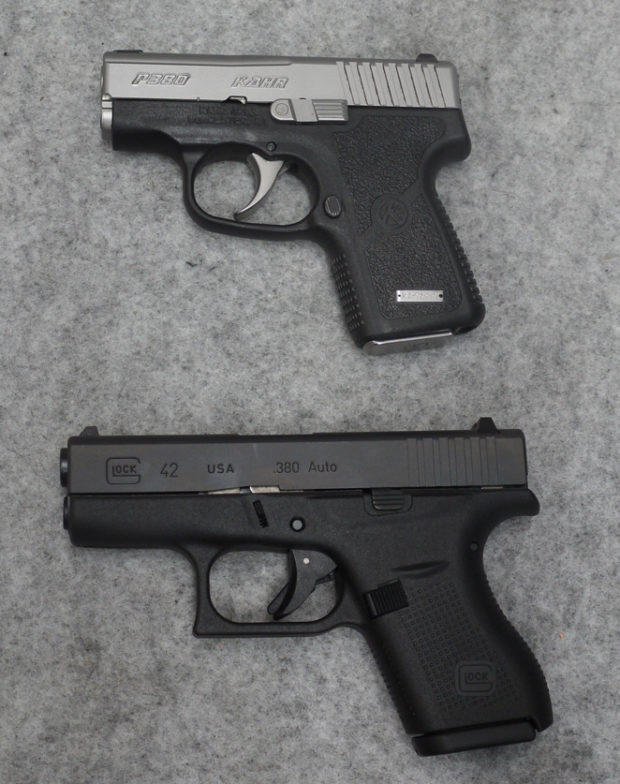 This is a guest article from friend and student “Gaston Garand.”  I think the Glock 42 and the Kahr are the two best pocket .380 autos on the market right now.  When Gaston found 400 rounds of .380 ammo, he put the two to a test and offered to write up the results for my blog.  Thanks to Gaston for the excellent article!

I went to the range the other day ostensibly to shoot some of the guns I hadn’t shot in a while, and to let me wife become more familiar with the Glock G22 she bought recently. I took everything from J-frame .38s to a Ruger Security Six in .357, a Taurus 3” 431 in .44 Special, a Kahr CW 45 and a Para Ordnance GI Expert 1911, Glock G22 and G23, and the newest additions to my stable, the Glock G42 and Kahr CW 380. I was all set for a wonderful day at the range, but as they say, “a funny thing happened on the way to the forum.”

During the most extreme point in the ammo crisis, not being able to find decent plinking .380 ammo, I broke down and bought five boxes of TulAmmo. For those who don’t know, this is cheap, Russian, steel-cased ammo. I had also brought along some Buffalo Bore in both 95 gr. FMJ FN and 90 gr. Speer G.D. JHP, Hornady Critical Defense 90 gr. FTX, and lastly, Remington 102 gr. Golden Saber. My range day objective had just been altered. Given the popularity of the .380 for self-defense purposes, I decided to conduct a test with arguably the two best pistols chambered in that caliber.

The first thing I wanted to do was get rid of that crappy TulAmmo. This would be a good time to drive home a very important point: Practice with the ammo you intend to carry. I’ve not always done this in the past because I usually carry a revolver or a Glock as my EDC guns, and those are two platforms where you really do not have to worry about ammo selection all that much. This test was eye-opening with respect to ammo sensitivity (more on that later), but the point is, train with the ammo you intend to carry. We had a saying in the Military Police Corps, “train like you fight, because you’ll fight like you train.” I know it’s more expensive, but once you find what runs flawlessly in your gun, train with only that ammo. You cannot put a price on your safety and the safety of your family.

Conditions at the range were sunny and 64 degrees, with a slight breeze out of the northwest. My training methodology is a little unorthodox from others I know, but it works for me. I start with a standard B27 target, and then I attach a six inch paper dessert plate center mass, and then set the target at the seven yard line. My reasoning is, for the intended purpose of these guns, that’s about the distance you’ll be engaging the threat, if not closer; these are not tack drivers. All drills are done rapid fire, as this is how you’ll likely deploy the weapon (“train like you fight…”). My goal, then, is to simply get all five shots (these two weapons hold six, but I run five-shot strings) within the dessert plate as quickly as possible. Combat accuracy.

Prior to this test both guns had never been fired except at the factory. I ran the Kahr first (Kahr recommends firing 200 rounds before the gun is considered “broken-in”), and it chewed through the first five shots with no problem. Next came the G42.  Let me start by saying, the Glock’s extractor does not like TulAmmo. The third shot produced a stovepipe, but once cleared, fired the last two rounds with no problem. And so it went, alternating back and forth until both guns had been through 125 rounds of the steel-cased devils.

This is where the epiphany occurred. After running five rounds through each gun 25 times, the G42 only made it through four rounds without a failure of some type (stovepipes mostly, but a few double feeds). It truly does not like this ammo! The Kahr, on the other hand, had exactly one failure to extract (FTE), and that was due to a case fracture. Let me say this about this about the TulAmmo…it shoots dirty, as the guns were filthy at this point.

I contemplated cleaning both pistols at this point, but decided against it. I was eager to run the Buffalo Bore through both pistols, as I had read from another gun tester the G42 did not like it. It must have been specific to his gun (more validation on finding what YOUR gun likes and training with it) because the Glock blew through it with no hiccup what-so-ever. In fact, at this point it got downright boring, as both pistols finished their next 75 rounds with the aforementioned ammo with nary a problem.

The Kahr, on its very last run of the day, with a mixture of ammo in the mag, failed to go completely into battery. I don’t know if was the mix of ammo in the mag, or the fact that it was filthy, but a quick bump to the rear of the slide with the palm of my hand cured the problem, and I finished the last two rounds with no issues.

Accuracy with both pistols was effective for their intended use, and I applaud Glock for putting excellent sights on the G42. Only issue was it shot a little high and to the left, but I never failed to get all five shots on the plate. After the test, since I had ammo left over, I had my wife put both pistols through their paces. There was a lot of love for the Glock with respect to how it filled the hand and perceived recoil, but paradoxically, she shot the Kahr more accurately. Go figure.

Carry options for both are similar, though the Glock, with the magazine extension (sold separately, and is not a +1) would be a little difficult for pocket carry. With flush fitting magazines (two are supplied with the pistol), it fits nicely in the front pocket of my cargo shorts resting in a DeSantis Nemesis holster. Additionally, it rides almost unnoticed in a Crossbreed Appendix holster, presenting the right amount of grip for a fast, smooth draw. I can’t say the same for the Kahr in appendix carry, as there’s just not enough grip to grab for an effective draw. It is therefore relegated to pocket carry in the DeSantis Nemesis.

Takeaways: Both of these pistols are excellent examples of EDC guns for self-defense, and I highly endorse both with the following caveat: Find what quality, defensive ammo they like, and use it for both practice and carry. You’ll be glad you did.