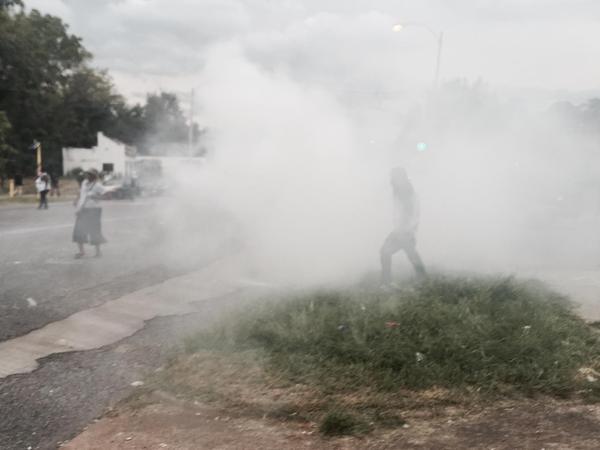 With predictable regularity, the media and various civil rights groups become indignantly incensed when the cops or an armed citizen shoot a criminal in the back.  It somehow violates society’s ideal that all confrontations should be settled “face to face” and be a “fair fight.”  That doesn’t happen very often in the real world.

Society as a whole needs to better understand the dynamics of a shooting incident.  You may be surprised, but people get shot in the back A LOT.

What may surprise you even more is that most of these shots are justifiable.  Let’s see how it can happen….

Many criminals are shot in the back in what we call “partner rescue” scenarios.  Imagine a situation where a police officer calls for help as he is in a hand-to-hand struggle with a suspect armed with a knife.  The officer would shoot the suspect himself, but he is afraid of getting stabbed if he lets go of the suspect’s knife arm to draw a gun.  When fellow officers arrive they see what’s happening and shoot the criminal.  If two people are fighting, it’s easier and safer to take the shot from the bad guy’s back than to shoot while your fellow officer is between you and your target.

Such a situation leads the media to report on the “suspect shot in the back” thereby aggravating community tensions in a perfectly justifiable shooting.

Police are chasing an armed criminal who just shot someone.  The criminal is still in possession of the gun as he runs from the pursuing officers.  The criminal is running directly toward an elementary school playground filled with children.  The officers fear that he might try to take a child hostage.  If you were pursuing the armed criminal, would you shoot him in the back to save the children?  I probably would if I couldn’t stop the bad guy any other way.  You probably would too.  And my guess is that this type of “back shooting” would be ruled a justifiable homicide by most courts.

Both of the previous scenarios are examples of relatively clear cut situations where the police would likely be justified in shooting a suspect in the back.  Other situations require a little more knowledge to understand.

The Force Science Institute is the undeniable leader when it comes to researching the murky situations that cause officers to shoot criminals in the back.  They’ve done multiple studies to determine suspects’ and officers’ reaction times as well as to quantify exactly how certain events happen in gunfights.   Their research shows some truly remarkable data.  Let’s look at some of the lesser-known causes of shots to the back….

1) Moving Targets– Did you know that 40% of police shootings involve shooting a suspect who is running (and usually running laterally or away from the officer)?  When subjects are running, the dynamics of the situation can change very quickly.  A surprising number of criminals fire their weapons over their shoulders as they run away from officers.  Any reasonable officer would shoot a suspect in the back under those conditions.  If the criminal is running laterally while shooting at an officer, the officer could aim at the suspect’s side and end up hitting more towards the suspect’s back if he doesn’t “lead” (aim in front of) his target.  Properly leading a running target is rarely taught in police training classes.

2) Reaction Time- It takes time for the brain to process information and make a decision.  The more complex the situation, the longer it takes to make the decision.  Here are some statistics:

– On average it takes .25 seconds to react to a threat cue and begin to act.

– If that reaction to a threat cue involves a decision (i.e. “Is the thing in his hand a gun or a cell phone?”) the reaction time time is increased to an average of .56 seconds.

– The average officer takes  .35 seconds to process the fact that a threat no longer exists and to stop shooting.

– The average officer fires one bullet every .25 seconds after he begins to fire

Do you see the problem?  Let’s say the bad guy is facing the officer and begins shooting.  The officer starts shooting back and hits the bad guy.  Bad guy drops the gun and spins away as the bullets hit him.  It takes the officer .35 seconds to recognize that the bad guy is no longer a threat.  He is firing a bullet every .25 seconds.  That means the officer will generally fire one to two rounds AFTER making the decision to stop shooting.   It’s very easy for those bullets to end up in the criminal’s back.

This is the BEST possible case scenario.  Other factors can slow reaction time even more.  Bill Lewinski of Force Science Institute writes:

“The delay in noticing any change in the nature of the threat and having the officer change his or her behavior in response to that threat could theoretically take the average officer a second to a second and a half in a dynamic, “real-world,” life-threatening encounter if the officer did not expect that the threat would cease. This process alone could be the reason for an extra three to six rounds being fired by the officer after the threat ceased—particularly if the officer was shooting as quickly as possible, was focused on shooting to save his or her own life, or emotionally recoiling in response to that threat and also simultaneously involved in assessing the threat.”

While it is unfortunate that criminals are shot in the back under these conditions, it is understandable.  No matter how much an officer trains, he can’t beat physics.  The time lag created by natural reaction times quite simply creates situations where criminals get shot in the back.  Check out more research on this topic HERE.

3) Suspect Movements– Without even considering the reaction time issues, suspect movement patterns may lead to shots in the back.  A suspect who is running away from the officer can turn his shoulders, fire a shot and then have his back turned to the officer in an average of .14 seconds.  That’s a shorter time period than it takes for the officer to physically pull the trigger and the bullet to hit the target.

In a situation like this, the officer may squeeze off a round as the suspect is facing him, but by the time the bullet reaches the target, the bad guy has his back turned.  Bad guy gets shot in the back and the officer (to say nothing of the media or the suspect’s family) doesn’t understand how it happened.  The officer swears the bad guy was facing him and firing a weapon when he shot.  The evidence of the bullet wound in the back “shows” otherwise and the officer gets criminally charged and branded as a liar by the media.  The officer may be telling the truth.  He could have fired while the suspect faced him.  He can’t control the suspect’s movements after he pulls the trigger.

The exact same dynamics are present when citizens shoot criminals or soldiers fire on enemy troops.  If you own a gun, it is important for both you and your defense attorney to understand the dynamics of a shooting incidents like these in order to counter the inevitable public criticism and potential criminal charges.

It may be even more important to be able to explain these situations to less educated friends who don’t understand how the criminal was shot in the back.