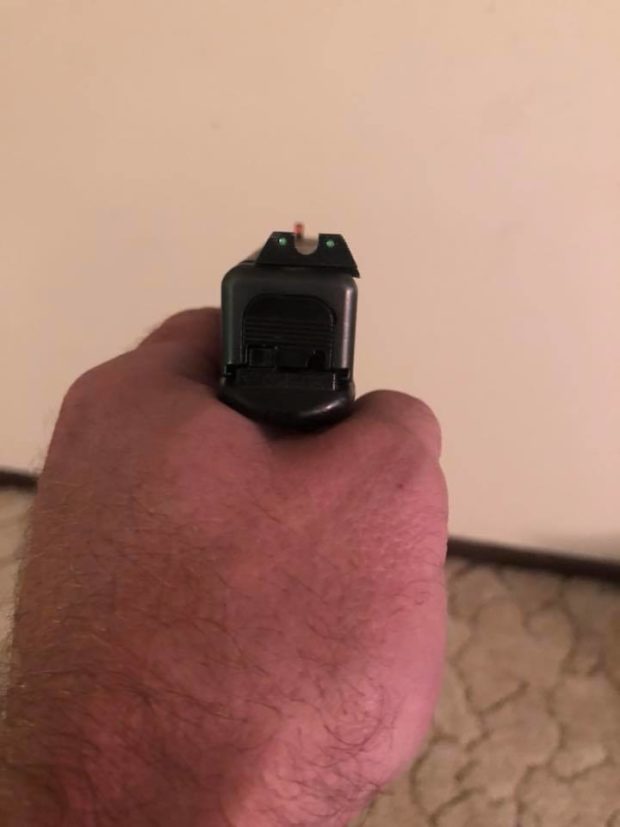 I recently did a drill in class where there was a high likelihood that some of my students would accidentally drop their unloaded guns.

Instead of letting them potentially damage their pistols, I passed my gun around and let them use it instead.

One of the students asked: “What if I drop your gun?”

I replied: “It’s a 17-year old Glock with a home stippling job and 65,000 rounds through it. How could you make it look worse?”

As I said that, I was thinking “…except for the sights. I’ve seen those get pretty fucked up after a spill on concrete.”

Sure enough, the gun took a couple trips to the range floor. Sure enough, one of those trips involved the gun landing directly on the Trijicon HD rear sight. 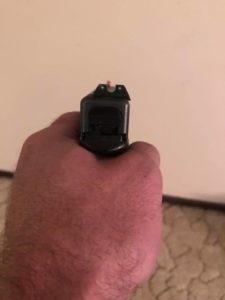 No harm done. In 30 seconds I will be able to re-center it with my sight pusher. Just a caution for those of you who bobble your pistol.

When I was the armorer for the police department I had the occasion to re-center about half a dozen sights on the officers’ guns following incidents where they either dropped the gun or fell and landed on the holstered pistol.  One of the more dramatic examples involved a patrol officer who got in a high speed chase trying to arrest two robbery suspects driving a stolen car.  As most of these incidents end up, the driver of the fleeing car crashed, T-Boning a minivan after running a red light.

The officer saw the crash and ran up to the car with his gun drawn.  As he arrived at the rear of the car, the vehicle went up in flames.  Both of the  robbers were unconscious from the crash and in danger of being burned up.  The officer couldn’t get close enough to the car to get them out.  He reholstered his Glock and ran back to the cruiser to grab a fire extinguisher.

In the stress of the incident, the officer forgot to fasten the retention strap on his holster.  While sprinting to the cruiser, the officer’s Glock fell out of the holster and hit the pavement.  That tumble moved the rear sight so far off to the side that it almost fell off.

Remember that your sights can move after a surprisingly minimal impact.  If you fall or drop your gun on a hard surface, take a few moments to check the gun’s sights and make sure they are still aligned properly.

It would really suck to have to go into a gunfight with a weapon that is shooting 10 inches to the right at a distance of twenty feet.   Playing with some “Kentucky Windage” is cool, but I prefer to have my sights on straight with any weapon I am carrying defensively.