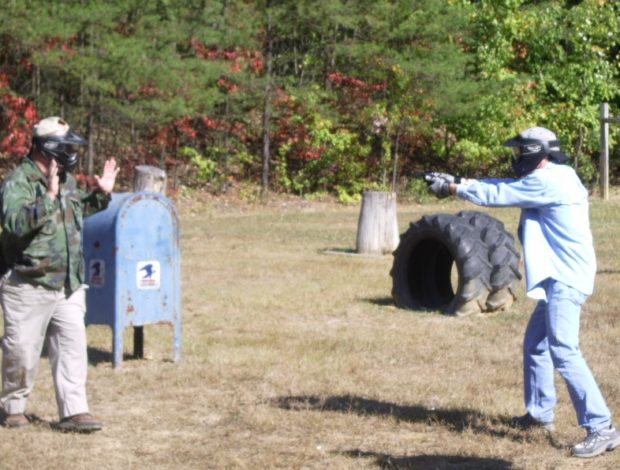 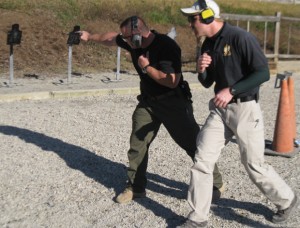 The author practicing shooting on the move at TDI

As the full-time training officer and firearms instructor for my police department, I often have the opportunity to attend firearms training sessions from some of the best trainers in the world.  I have noticed that most of these trainers teach students to shoot their firearms while moving, with the premise being that a student is less likely to be struck by incoming fire if he/she is a moving target.  In addition to “shooting on the move”, almost all trainers advocate moving to cover in a gunfight, if said cover is nearby.  These two techniques make seem to be very logical.  Most people would agree that making yourself a moving target and seeking bullet-resistant cover could only help one’s chances of winning a gunfight.  Having an inquisitive mind, however, I’ve always wondered exactly how much of an advantage one could expect to gain over his opponent through the use of movement and cover.

To answer this question, I began an exhaustive search of hundreds of firearm tactics books and countless accounts of police-involved shootings looking for examples where utilizing movement or cover saved a person’s life during a gunfight.  During my search I found many instances where officers and civilians reported that they used cover and/or movement to help them win a firefight.  I also found quite a few articles and books extolling the perceived benefits of cover and movement.  I did not, however, find any concrete scientific evidence describing any quantifiable advantages of using movement or cover in a gunfight.  The question remained: Which is the best tactic to use in a gunfight…remain stationary, move, or seek cover?

Because I couldn’t find the type of information I wanted, I designed a scientific experiment to get my own data.  Besides training law enforcement officers, I also teach firearms skills at the Tactical Defense Institute (TDI), a shooting school in southern Ohio.  John Benner, the owner and chief instructor at TDI was very supportive of the idea of my experiment and was curious what the data might show.  He suggested that the ideal test subjects would be in his soon-to-be–held “final intensive scenario training” (FIST) class.  The students enrolled in this class were highly trained, all having graduated at least six levels (ten days) of TDI’s handgun curriculum.  Most had additional training from other shooting schools as well.  John graciously allowed me to perform my experiment during a segment of the two-day FIST course.

The test I conducted was loosely based on some training drills created by Sam Faulkner, an innovative trainer recently retired from the Ohio Peace Officers Training Academy.  The experiment had three phases.  During each phase, one student faced another with a distance of fifteen feet separating them.  Each student was outfitted with safety gear and armed with a .38 caliber revolver loaded with two “Code Eagle” brand marking cartridges.  For those of you unfamiliar with this technology, the marking cartridge is a .38 paintball powered by a special primed plastic case.  It chambers in any .38 revolver without modification and shoots the paint ball at approximately 300 feet per second.  The rounds produce a sharp stinging sensation and a bright smear of red paint on the bodies of the people who are hit.  Obviously it is necessary to wear protective face shields when using these rounds in order to prevent eye injuries.  In prior training exercises I’ve found the Code Eagle rounds to be very valuable in gunfight simulations.  They are reasonably accurate, and produce quite a “pain penalty” to the person who is struck.  Anticipation of even the small amount of pain these projectiles generate causes considerable anxiety for most people.  This anxiety at least partially duplicates the stress reaction one is likely to experience in a gunfight.

In the first phase of the experiment, shooters were given orders to fire their two rounds at each other as quickly as possible after a surprise start signal was given.  I instructed the students to remain stationary during the simulated gunfight.  Absolutely no movement of the feet was allowed.  Phase two was identical to the first phase, except that students were allowed free movement (forward, backward, or lateral) after I gave the surprise start signal.  In phase three, students started a step away from one of two fifty-five gallon steel drums.  These drums were to simulate cover.  On the start command, students were instructed to move to their steel drum and use it for cover while engaging their respective adversaries.

A total of nineteen students participated in the experiment.  One hundred fourteen rounds were fired, with thirty-eight rounds fired per phase.  I tracked and compared hit percentages during all three phases, differentiating between hits on the torso and the more peripheral hits on the arms and legs.  The data are as follows:

The students who participated in my study were as surprised by the results as I was.  We all expected that movement and the use of cover would reduce the hit rates of the rounds fired.  We were astonished, however, at how much difference moving and seeking cover made.  The difference in hit rates between standing and moving cannot be explained away by a lack of skills by the shooters.  Each shooter had extensively practiced shooting on the move, with most being able to hit a twelve-inch steel plate on demand any distance inside of fifty feet while moving.  Similarly, these students are adept at hitting a moving target while standing still.  The critical factor seemed to be the difficulty the shooter experienced in hitting a moving target while moving his own body at the same time.  This clearly identifies a need for additional training and highlights the critical importance of making yourself a moving target during a gunfight.  If highly trained shooters hit their opponents’ torsos with only eleven percent of rounds fired, imagine how much worse the average street thug with no training and minimal experience will perform under similar conditions!

It is also clear that when students used cover they fared even better than they did while moving.  The hit rates would be far less than reported if several students didn’t break cover and retreat after running out of ammunition during the drill.  Most of the hits occurred when this happened.  Proper use of cover almost eliminated the chance of being hit.

One other critical statistic needs to be noted.  Thirteen percent of the hits across all phases of the experiment struck the hands or guns of the person at which they were fired.  This indicates a strong focus on the threat being directed against the shooter and a lack of attention to the front sight, creating some implications for future training.  These shooters are strongly indoctrinated in the use of their weapon sights for most shooting situations.  Even when shooting fast, they generally utilize a “flash” sight picture when shooting on targets.  Even with extensive practice, very few students reported seeing their sights in this experiment.  Not wanting to bring up the dreaded “point shooting versus sighted fire” debate in this forum, I’ll simply say that we as trainers need to do some more work.  We need to find a better solution to allow our students to hit their targets with a greater percentage of rounds during the stressful, fast-evolving nature of a gunfight.  Whatever that solution is, be it training in point shooting techniques, an enhanced sighted shooting curriculum, or stress-inoculating scenario-based training, it is our collective responsibility as trainers to find it.

It was interesting to note that some of the shooters in the above experiment shot with only one hand despite doing the majority of their training from a two-handed platform.  When asked why they had done this, most were unaware that they had fired one-handed.  Their bodies seemed to be on autopilot, self-selecting what was perceived to be the fastest way to get their guns on target. This fact, combined with the prevalence of hits on the hands or guns of the shooters indicates that we should focus much more of our time training one-hand shooting, hand transitions, and support-hand shooting techniques.  We should also emphasize the importance of carrying secondary weapons in case our primary gun becomes inoperative after taking a bullet.

Overall, this experiment generates more questions than it does answers.  I set two very critical limits in this experiment…a fifteen-foot separation distance and the firing of two rounds per shooter.  I chose the distance because a large percentage of law enforcement officers are killed while facing gunmen at this range or even closer.  For this study, it seemed an appropriate balance between a range that was so close that hits were virtually guaranteed and one that was too far for the Code Eagle projectiles to be effective.  It is likely that the results would be somewhat different if the ranges were altered.  Similarly, firing more or fewer rounds will probably change the results.  Who knows what to expect when variables such as multiple attackers are injected into the equation.  The true value of this experiment may not be the data obtained, but the experience given to the students.  They received a chance to see for themselves what techniques worked and which were not as successful. I do not expect anyone to alter their tactical doctrines or teaching styles as a result of this article.  I only encourage all trainers to examine the tactics they present to their students and be willing to put them to the test in a somewhat more chaotic environment than the traditional “square range”. It is only this type of thorough examination that will promote a greater understanding of tactical issues and, in the process, save our students’ lives.