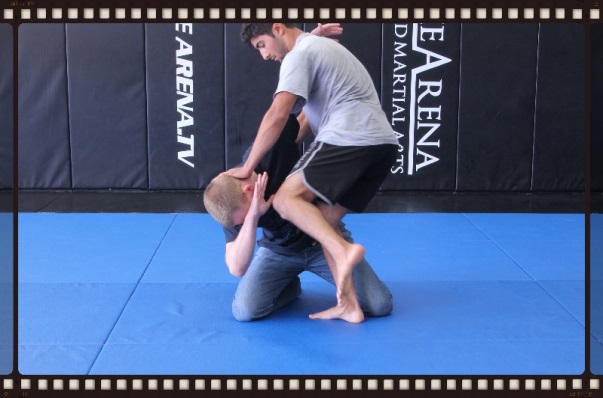 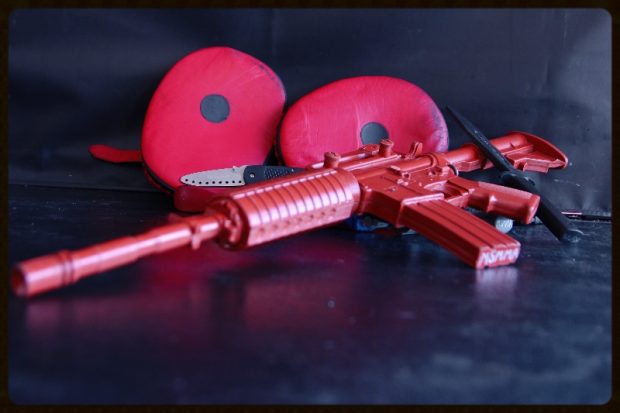 “We all love hitting the pads, swinging the knives and using the cool kid toys, but it’s the fundamentals that give us the skill to thrive in training and life.”

Sometimes we end up in the dirt, whether we want to or not. That’s just the nature of fighting: dirty, chaotic and unpredictable. Whether diving for cover, knocked off our feet by a larger opponent or simply the victim of bad footing on a slick surface, there are many ways to end up on the ground.

When we do hit the ground, getting back up is among our top priorities. Don’t get me wrong, I believe knowing how to fight on the ground is incredibly important (and in some scenarios you’ll have no choice but to do so), but humans are bipedal for a reason; we see further and move faster when on our feet. Standing up efficiently and safely is as fundamental a skill for close combatives as trigger press is for marksmanship. Fundamentals win fights.

Good stand-ups must be easy to learn and practice, and should be adaptable to the situation of the defender, to include his equipment and general state of athleticism. They must also strike a balance between speed and stability, being stable enough to allow defensive options if attacked during the stand-up process, but fast enough to minimize the time and space needed to get back on your feet. Below are detailed descriptions of three basic ways of standing up in a combative context. While they are certainly no substitute for in-person training, I hope you’ll try them out, apply and adapt them to your situation, and think objectively about how getting back to the feet should fit into your training plan.

From a supine position, the defender sits up and brings one foot to the floor. The hand on the same side is raised to fend off attack. The opposite hand is posted rearward against the ground and the leg on that side is extended to brace away an attacker should they reengage. Using the posted hand and foot, the defender lifts their hip from the ground and swings the extended leg under their body until the foot is planted and a standing position is achieved. Alternately, you may come to the knee before fully standing if circumstances require it (i.e. injury, presence of heavy gear such as packs or carriers, or if behind low cover.

Make sure to practice the stand-up on both sides of the body. If one arm is injured or if you accessed a weapon while on the ground and now have it in hand, you may need to post with the hand you are not used to using. 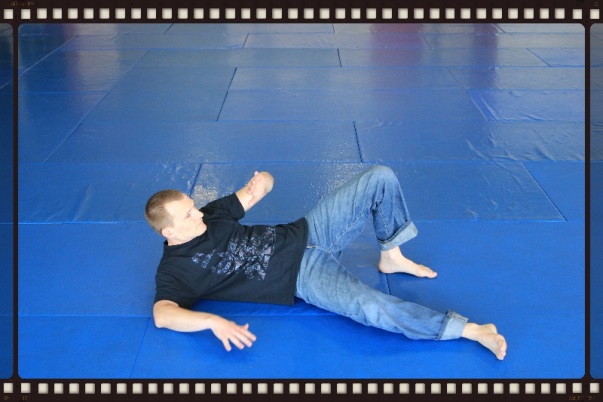 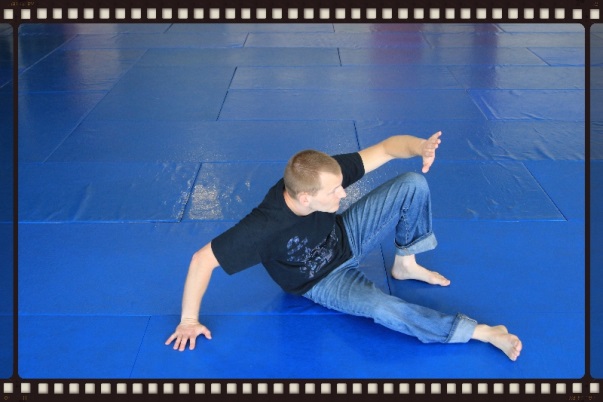 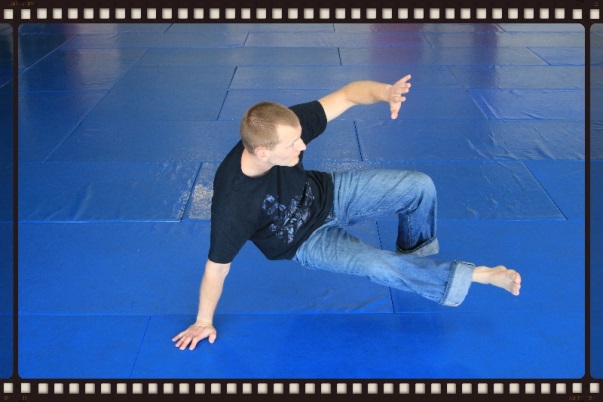 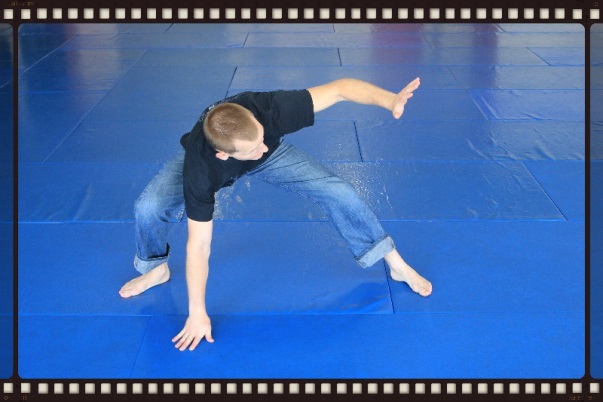 “The Technical Stand-up (AKA: Jiu-jitsu Stand-up) works via lifting the hip by planting opposite hand and foot. Note that the free hand and foot (panel 3) are both poised to defend in case an attacker encroaches while you are trying to stand.” 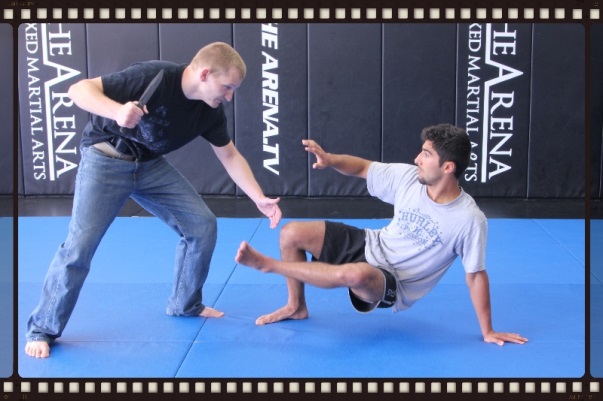 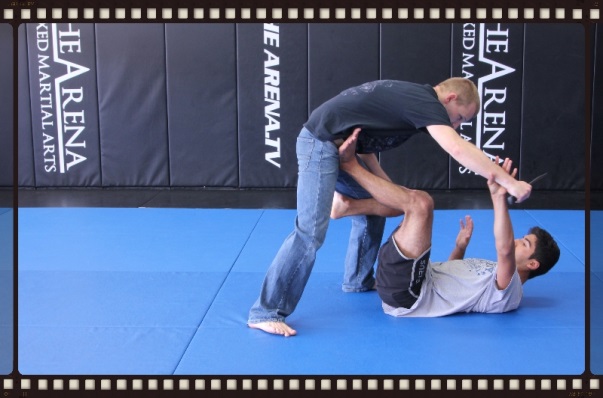 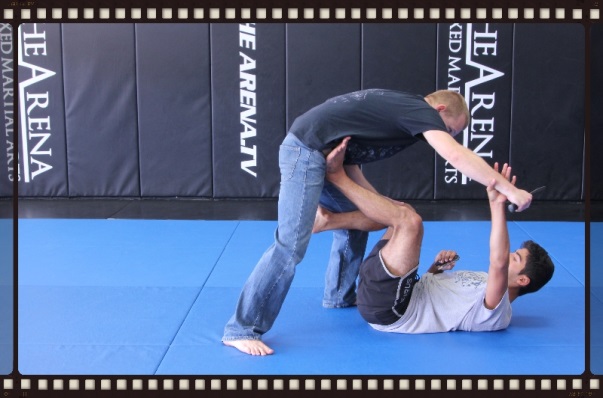 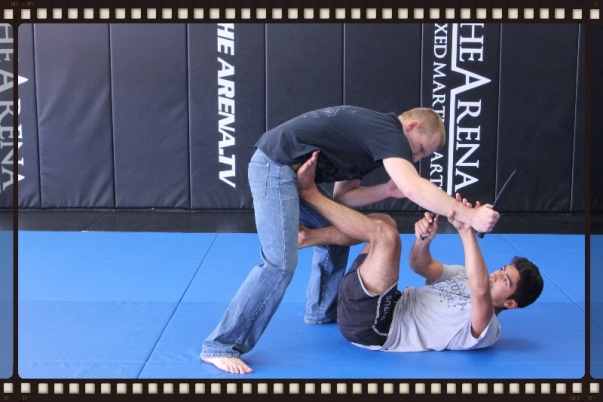 “While David attempts to stand, I encroach with a weapon. Because David was prepared with proper technique, he is able to brace me off with his legs and fend with an arm, allowing him space to access and use a tool, in this case a folding knife.”

So what about when you’re on the ground and so is the attacker, the two of you tangled as the fight progresses? This is where the Contact stand-up comes in. Bear in mind that there is far more you need to know about ground-fighting, but how to get back to your feet is a good place to start. Just understand that if you go to the tip of the iceberg and wipe your hand on it, that minute streak of moisture on your palm is to the whole of the iceberg as the contact stand-up is to ground-fighting.

Once you have been able to brace open a space to work in, sit forward and move your hips diagonally away from the attacker. Use one hand to brace or control the attacker and come up to post on your opposite hand (or elbow, depending on how much pressure the attacker is applying). Post your outside foot against the floor and, lifting your hips, swing your inside leg under until you can plant either your foot or knee and come to a standing position. Immediately counterattack or escape. 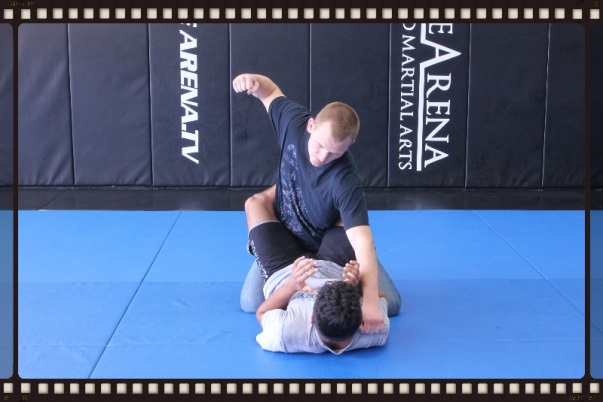 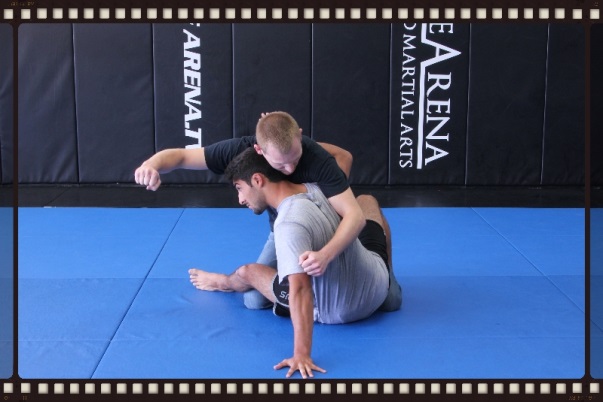 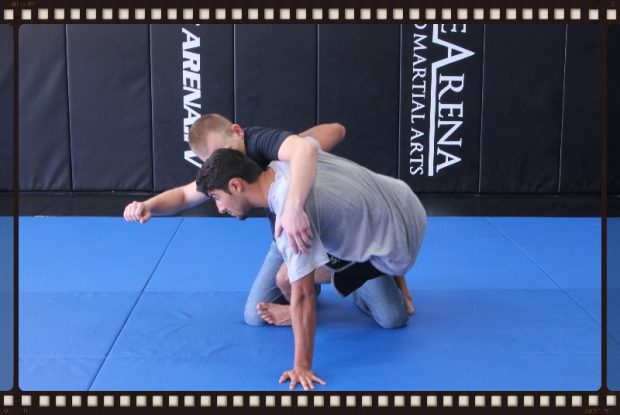 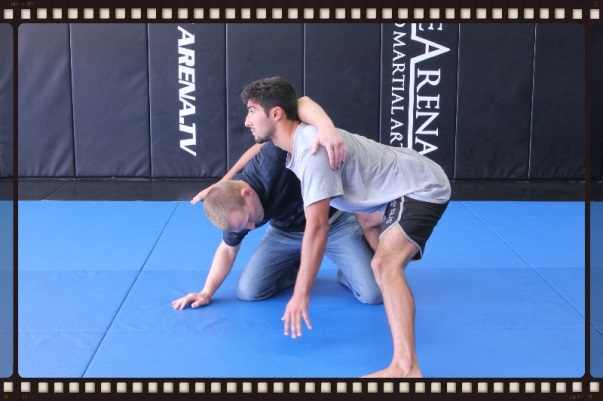 “As I attempt to strike, David sits forward and tucks his head against my shoulder (making my strikes largely ineffective) and begins the Contact Standup. Note how he uses an underhook (right hand) to control me as he lifts his hip with his based left hand and right foot. Swinging his leg clear allows him to immediately escape or counter-attack (shown as knee to head).”

Dynamic Stand-Up
The Dynamic Stand-up is one for the fastest ways back to your feet and it has the added benefit of being ‘hands free’ which makes it well suited for when the defender has an injury to the upper extremities, is carrying a long gun or otherwise can’t use a free hand. The Dynamic stand-up works best when there is significant distance between defender and attacker (i.e. an active shooter scenario in which the defender has dived behind cover or been injured and ‘downed’ momentarily). This stand-up does require a degree of athleticism, but is easily achieved with practice.

From a supine position, draw one foot toward the opposite hip until it is tucked under the other leg at the knee or higher. The other foot is kicked forward in an arc, hard, to gain momentum as you sit up. As you feel your weight rock over the tucked foot, use the heel of the other foot as an anchor and thrust the hips forward to bring your center over your base and into a kneeling position. If the situation allows, this kneeling position is a good time to pause and scan for threats before coming completely to your feet and potentially exposing yourself to danger. If you need to, however, you can come immediately to standing and get moving. 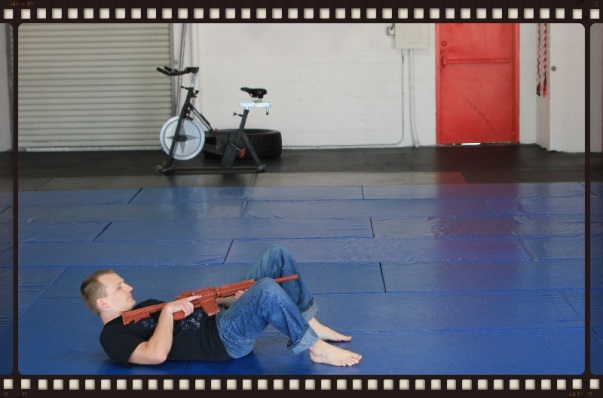 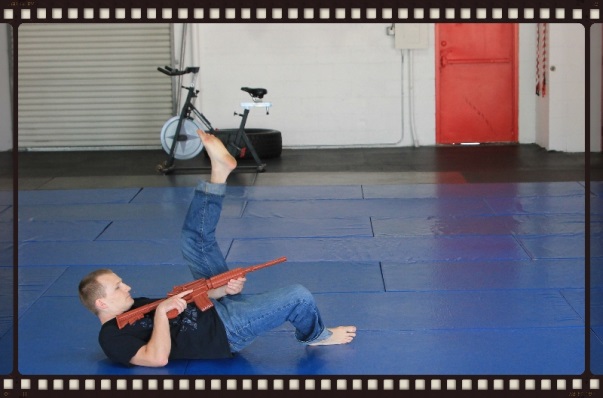 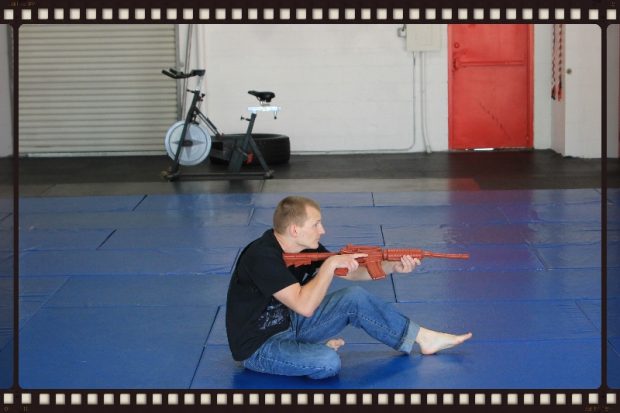 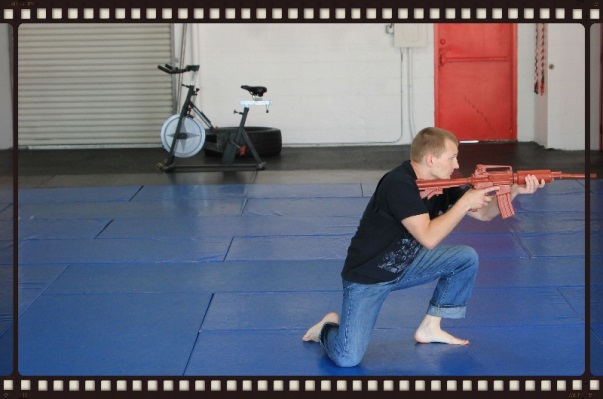 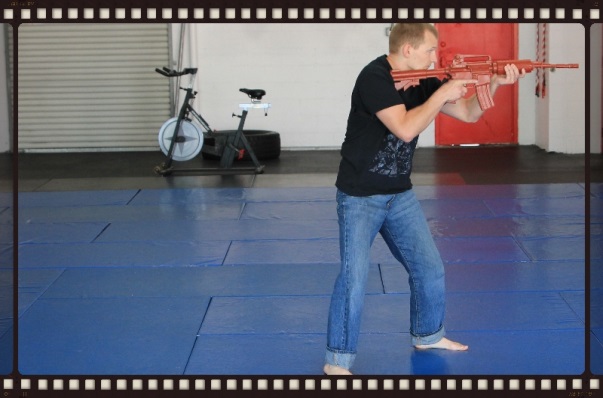 “The Dynamic Stand-up is useful when you prefer not or are unable to use a hand on the ground. The stand-up makes use of the momentum generated by kicking a leg forward (panel 2-3) and rolling your weight up over your hip and foot to a kneeling position, at which point you may pause to assess your surroundings or come immediately to standing.”

While it may seem mundane, the ability to stand up efficiently, even if injured, unathletic or carrying extra weight, is an important part of personal defense. Sometimes things catch us off guard and we end up in the dirt, but with some practice we don’t have to stay there.