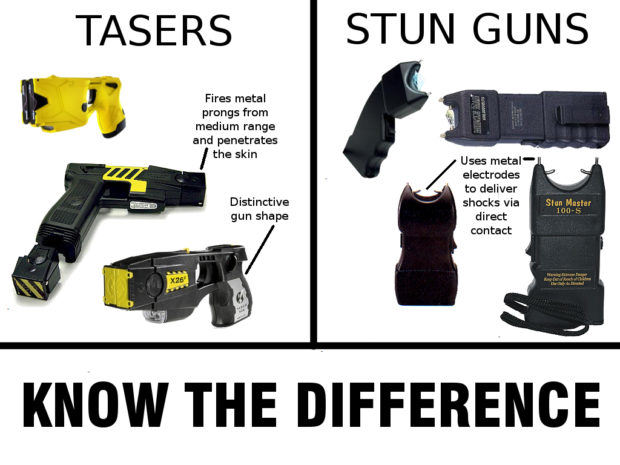 Have you ever thought about what you would do if a criminal threatened you with a Taser?

I’ve been seeing criminals use electric shock weapons with increased frequency recently.  I did a quick google search and found 20 separate Taser crimes in the last two months.

Five years ago, it was rare to see any crimes committed with electric shock weapons.  Now it’s quite commonplace.  Check out a few of the links below, to get an idea how the bad guys use “Tasers” on law abiding citizens.

In most of these stories, the weapon used by the criminal was identified as a “Taser.”  That may or may not be true.  News reporters frequently don’t differentiate between a Taser and other types of stun guns.  They aren’t the same.

The Taser was originally developed for the law enforcement market, but in the last decade or so Taser has sold a civilian version as well.  Tasers are quite expensive, ranging between $300-$1500 per unit depending on which model you buy.  We rarely see criminals with true Tasers.  Most criminals would rather sell a stolen Taser for $200 worth of heroin than use it to commit robberies.

The Taser shoots two darts that have a range between 10 and 25 feet (depending on cartridge and model.)  These darts actually penetrate the skin and have metal wires attached.  The wires then conduct the electricity from the unit to the target, allowing a safe stand off distance.

When hit by properly spaced darts, voluntary muscular action is nearly impossible.  In my Taser instructor classes, I’ve been hit with almost every model made (I’ve been an instructor since 1999.)  It feels like every skeletal muscle in your body is flexing as hard as possible about five times a second.  You just stiffen up and fall.

In contrast, a stun gun does not shoot any projectiles.  It must be held against an attacker and only causes pain, not the intense muscular disruption of the Taser.  It doesn’t feel pleasant. In fact, depending on where the shock is administered, it can really hurt.  But unless the stun gun is held on someone’s neck or into their armpit for a significant period of time the stun gun will not incapacitate your attacker.

It’s just pain.  Pain can be easily ignored if the attacker is extremely motivated, drunk,  or on high on drugs that mute the body’s sensitivity to pain.

Watch this video of some kids shocking themselves with stun guns just for fun to see what the effects are like:

So, how would you fight a criminal armed with a stun gun or Taser?

First, you have to recognize what type of weapon the criminal has.  Tasers are shaped like guns and have a laser sight.  If it doesn’t have a laser or is box-shaped, you are dealing with a stun gun, not a Taser.

Stun guns are easier to deal with.  If he can’t touch you, he can’t hurt you.  Keep him at a distance if possible.  If you can’t maintain distance, remember the video of the kids above.  You can take a shock and be fine.  It’s going to sting, but you won’t be incapacitated.

Fight with everything you have.  Try to take it away from the criminal.  In a worst case scenario, direct the shocking posts to a thickly clothed arm or leg to minimize the effects.

Tasers are a little tougher to counter because you don’t know the range of the cartridge the criminal is using.  It could be 10 feet or it could be 25 feet.  If you can’t get outside the 25 foot safety zone, at least make sure you are a moving target.  Both probes have to hit you to deliver the electricity and it’s easy to miss when the target is moving erratically.

The other option is to close the distance.  The two darts have to be spread apart several inches for optimal effectiveness.  That doesn’t happen if you are closer than five feet to the shooter.  You’ll still get shocked, but it will be more like a stun gun than a Taser.  Shield your face in the crook of your elbow (it would suck to get a dart in the eye) and charge in.  The shock you get won’t be nearly as incapacitating.

Sometimes the darts will be too close together or one dart won’t fully penetrate.  When that happens, you’ll feel a shock but may not be incapacitated.  If you can move, drop to the ground and start rolling over the wires.  The wires are very fragile and break easily.  Rolling over them can further dislodge the dart or break the wires, thus ending the shock.

Another alternative is to wait until the shock is finished (five seconds for a police Taser and 30 seconds for a civilian version) and quickly pull out the darts.  The Tasers can be re-triggered if the darts are still attached.  Your goal is to rip them out before the bad guy pulls the trigger again.

What about shooting the criminal who is threatening you with a Taser or stun gun?  That gets tricky.  Those shocks hurt, but it’s hard to justify shooting the attacker as the shocks don’t rise to the level of lethal force.  They simply aren’t likely to cause serious injury or death.  Have you thought about that?

The actual Taser (not a stun gun) gets even more tricky.  Although we’ve seen many people who have died after being shocked by a police Taser, most of those fatalities occurred in a population that is in poor cardiovascular condition, has been fighting extremely hard, and/or is heavily under the influence of cocaine or methamphetamine.

The Taser isn’t likely to cause serious injury or death to a healthy individual.  In fact, it’s so safe that many police departments rank it a lower level of force than even pepper spray.  That’s about as far away from “lethal force” as you can get on any scale.

In you are interested in Taser-related deaths, read my article Tasers and Vulnerable Populations.  If you are a member of any of these “vulnerable populations,” it might be easier to make the case that a Taser being used against you could be considered lethal force.

The true danger of responding to a Taser threat lies in recognizing that if you are incapacitated by a Taser, the criminal can do literally ANYTHING HE WANTS to you.  He could take your firearm, cut your throat, or stomp your head into the ground.  You are completely powerless to resist.  It is for this reason that I expect many juries to understand why a citizen might use lethal force against a Taser attack, but it won’t be an easy fight.

Tasers look an awful lot like guns and even have a laser sight.  If I was facing a criminal armed with a Taser, I could easily mistake it for a firearm.  Juries understand when we shoot people who have guns pointed at us.

Never lie to the officers or the court, but a statement to police (through your attorney) after shooting a criminal armed with a Taser might contain an explanation about how you thought the criminal was pointing a gun at you.  Under those circumstances, it absolutely would not be reasonable to move closer to better identify the threat or to wait to see whether “the gun” is loaded with bullets or just electric darts.  It would be reasonable to shoot if you truly believed that the attacker was pointing a pistol in your direction.