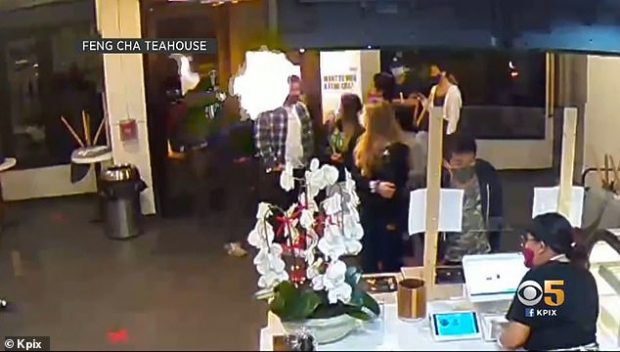 In  a world filled with rioters armed with Molotov cocktails and commercial fireworks, we have to consider fire as a weapon used against us.  I’ve given advice to police officers facing flammable liquids.  I’ve also written about dealing with thrown Molotov cocktails.  Today’s installment will take a look at a more pedestrian use of fire as a weapon.

In my misspent youth, I created homemade flame throwers using an aerosol can of hairspray or insect repellent and a butane lighter.  I think every kid in the 70s and 80s did that.  I learned the trick in Boy Scouts.

Last week I saw an attack in California where the attacker took this idea to an entirely new level.  He used a can of WD-40 and a blowtorch to create his flame thrower.  He entered an Asian tea house and began spraying people with the oil and lighting them on fire.  Watch the short video.

Have you considered how you might respond to such an incident?  Here are some tips.

1)Distance equals safety.  A flame thrower like this is an unusual weapon.  It’s almost like an extended range contact weapon. If you can get out of range of the spray and the flame you will be safe. That should be your prime goal. Few flammable aerosols spray longer than 10 feet.  If you can get that far (and the attackers don’t advance) you will be safe, at least temporarily. Why are you worrying about doing anything other than running?

As you make your escape, have you thought about clothing considerations? Could you run away in high heels or dress shoes? Do you wear clothes made of synthetic fibers that will quickly catch fire and/or melt? If I saw even one of these attacks in my area, I wouldn’t leave the house unless I was wearing shoes I could run in and all natural fiber (cotton and wool) clothing.

2) In contrast, proximity equals safety as well.  If you can’t get away, close the distance and try to latch on to the attacker.  Attempt to take away the lighter/blow torch.  He may be less likely to turn you into a burning torch if he knows that doing so will set him on fire as well.

If you don’t have an extinguisher, stop, drop, and roll.  Kill the flames with a blanket or coat.  If all else fails, you can use a can of soft drink to stop the flames.

4) Pepper spray is a viable option.  Most pepper spray streamer units will travel farther than a can of WD-40 shoots.  Get out of range and hose the guy down with OC.  It would probably be best not to carry OC that uses rubbing alcohol as a carrier agent.  If he touches the flammable stream with his blow torch, it may set your hand/OC unit on fire.

5) A blade may be better than a gun.  If the bad guy is spraying everyone with a flammable liquid, do you want to fire a gunshot?  I don’t.  I would prefer not to inadvertently torch an innocent person from an errant spark.  A knife may be messier, but in this scenario it might prove to be a better option.

6) Don’t forget additional weapons.  This dude also had a knife, an axe, and several Molotov cocktails on his person.  Be careful when engaging.  Never assume that the flame is his only weapon.

I hope you never have to face fire as a weapon.  If you do, please remember these simple tips.