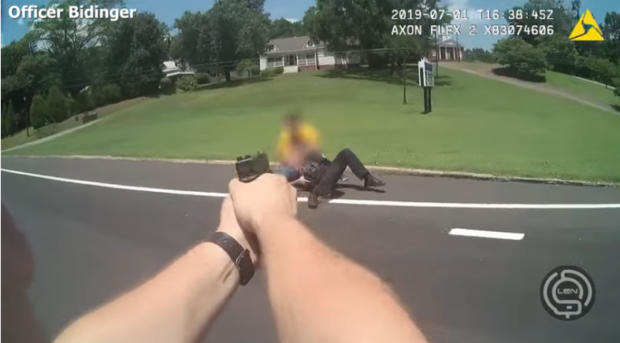 My cop friends should watch this police body camera video footage. It highlights many of the problems created by poor officer selection practices and subpar training.

What can we do differently to create a better outcome?

–After giving the suspect a few chances to comply, you should be thinking about escalating force options so long as the man remains a threat.

The “cover” officer here should have very quickly transitioned to a Taser or pepper spray while the officer giving commands provides lethal force cover fire.

The first time the officers considered one of them going to less lethal was nearly 2.5 minutes into the encounter. That should have happened in the first 30 seconds.

– Retreating that far back creates a multitude of hazards. You may fall when walking backwards. A good backstop might disappear. Moving backwards appears “beta” to the suspect and may provide him with more courage to commit his attack.

The officers also backed far past their cruiser that was running with keys in the ignition. The suspect could have stolen the cruiser, gone mobile, and armed himself with the long guns inside the car. That makes a shitty situation even worse.

Furthermore, being backed into a busy roadway is not conducive to your safety. If you decide to move, move laterally and don’t give up ground.

– The officer clearly didn’t know what to do when his verbal commands didn’t work. He was operating under the “theory of presumed compliance” and didn’t have any alternate solutions when that verbal compliance was not obtained.

This is mostly a training problem. A few hours of training by role playing these types of scenarios with Sims guns and training blades would have taught the officer a much better way to handle the situation. Unfortunately, many cops don’t ever get training that truly integrates all of their force options in a stressful and dynamic way.

-Panicked firing.  It sounds like the original officer fired eight shots very quickly and appeared to get a single hit.  The suspect was not incapacitated.  The officer couldn’t maintain the ability to think either rationally or tactically.  The officer got scared (understandably so), and his survival “lizard brain” took control.  When his lizard brain took over, he reverted to gross motor skills like hammering the trigger as fast as possible.

You need a lot of practice or experience to keep your brain out of lizard mode.  You need practice under high stress in order to remain calm and rational when things start going sideways.  For those of you who want more information on the topic, I would recommend that you take some classes from either John Hearne or Dr. William Aprill.   Both men teach classes all around the country and also present their research at many of the national tactical training conferences.

Take a look at John’s diagram below.  There are four facets over which the officer exerts control regarding the use of force.  Two of the four (emotional control and automaticity) were lacking in this shooting. 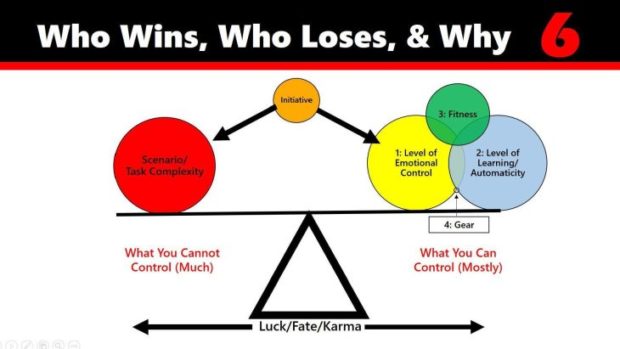 If you can’t attend one of the training classes I recommended, reading Ken Murray’s Training at the Speed of Life will also help you to design training sessions that will teach you to keep out of lizard brain territory during your next stressful encounter.

-A lack of mental preparedness.  It appears to me that the officer never really fully embraced the idea that sometimes shooting people is part of the police officer job description.  The officer shot.  When the suspect later got up and attacked, the officer didn’t fire any more shots despite the fact that he was clearly justified in doing so.  It looks to me that we saw the moment that the officer decided that he didn’t have the mental fortitude necessary to kill another human embedded in his psyche.

If you are a cop in today’s world, you must understand that you may be required to pull the trigger of your gun in defense of yourself or others.  You need to honestly assess your thoughts on the topic before you even accept the job offer.   If you don’t think you could shoot someone in the face of a lethal force threat, you should not choose police work as your career choice.

-Poor Subject control.  The cops just basically stopped paying attention to the bad guy after he fell to the ground.  Watch the video.  The suspect is still moving after the final shots.  He could have been trying to access a secondary weapon or perform any number of other harmful actions.  All the responding backup officers were dealing with the officer who initially shot.  That isn’t the right priority.

Make the scene safe by handcuffing and searching the bad guy first.  Look for other bad guys.  Then provide medical attention to your fellow officer.  These officers are very lucky that the bad guy didn’t have any additional weapons hidden on his body.

-This is who is coming when you call for help.  In the last 10 years we’ve seen a very concerted effort throughout the country to hire police officers who are extremely reluctant to use force.  Police candidates who play contact sports, practice martial arts, or enjoy shooting are often summarily rejected by hiring boards and committees.  This practice will create a net societal harm in the long run.

Combine poor hiring practices with the horrible lack of training endemic in the policing profession and we will be seeing a lot more cases that look like this one in the future.  As a citizen, this is who responds when you call 911.  Does he appear confident enough to handle business?  As a cop, this is who will show up when you are getting curb stomped on the street.  Do you trust your life to him?

As I’ve said many times before, you are truly on your own.  A lot of the rescuers you call are unlikely to even have the skills necessary to rescue themselves in the face of sudden violence.

For everyone’s sake, we simply must perform better than this.