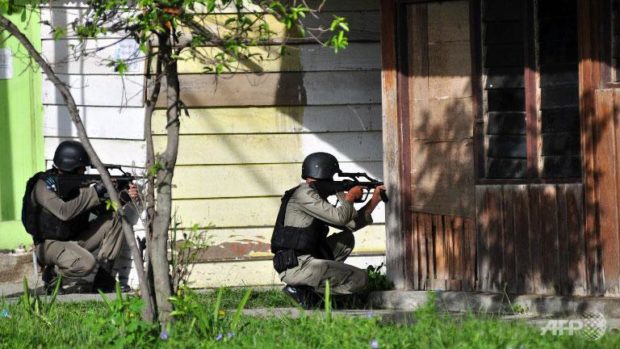 A recent terrorist plot was foiled by Indonesian authorities.  The terrorists were planning on bombing areas where tourists would be congregating.

For more information check out the link below:

I find it instructive to research the methods that the terrorist groups are using or planning.  The same tactics will eventually be used here in the USA.

In this case, the team of terrorists was going to simultaneously attack several prime tourist locations.  They planned on bombing and shooting police facilities, a major hotel, and several churches.  The attack plan appears to be similar to the one used by the terrorists in the Mumbai attacks, albeit with a heavier explosive component.

This type of attack could occur relatively easily in the USA as well.  The explosives used were the garden-variety ANFO similar to what was used in the Oklahoma City bombing.  Anyone here could make it with some fertilizer and diesel fuel.

If the attack was initiated with a bombing of the police station, all response efforts would be hampered resulting in more fatalities at the other sites.

Your tactical homework for the week is to consider what targets in your community would be most likely for a terrorist attack.  Do you ever frequent those locations?  Think through a response scenario for what you should do if you were in one of these high value targets when it was attacked.

You are inside a building that you identified as a likely terrorism target.  You hear a loud explosion nearby.  The building suddenly gets very dusty, the lights go out and people are panicked.  Three men enter and begin shooting into the crowd with AK-47 rifles.  The police and fire responses are delayed for 30 minutes as the police station has been simultaneously bombed.  They are further burdened by the fact that two other locations in the city are also under attack.  You will not be able to rely on anyone coming to save you.