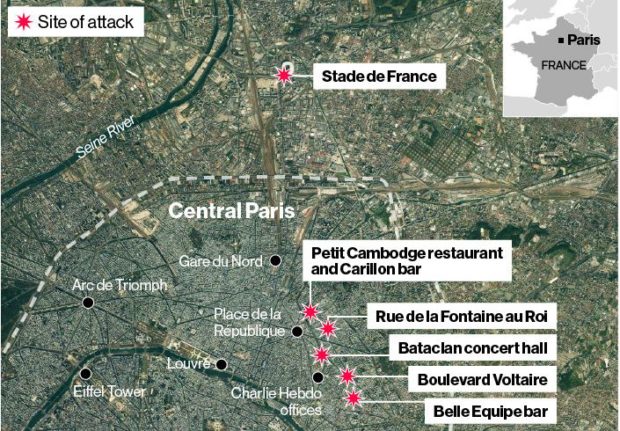 You have undoubtedly heard about the multiple coordinated terrorist attacks that rocked France last Friday night.  I’m researching the events and will provide a full debrief and “lessons learned” once more information has been released.

This should not be a shock to any long term readers of this site.  I’ve predicted the likelihood of increasing numbers of coordinated attacks involving both automatic weapons fire and explosives for years.  You will see more attacks like this in the future because they are effective, require minimum manpower, and create massive amounts of fear in the target population.

Fortunatly for us, because these attacks are not new (the French terrorists copied the playbook for the 2008 Mumbai attacks almost word for word), we don’t have to re-invent the wheel trying to come up with ways to stop them.  Until I come up with some better intel on the French attacks, I would encourage you to re-read a few articles on my website.  These articles explain EXACTLY how to deal with an attack similar to the ones in Paris last week.  Please read these articles deeply, think about their contents, and share them with anyone who may find value in the information.

Most of you are gun people.  Start here with Active Shooter Response for the Armed Citizen.

After you read that one, recognize that these terrorists (and many other active killers) used bombs along with guns.  You need to understand explosive devices and how they are used by terrorists.  Read Armed Citizen Response to the Terrorist Bomber

If you are a cop and may be responding to events like these, read Confronting the Mobile Killer.

If you don’t regularly carry a gun, read Naked and Afraid to learn how to effectively set up an ambush against an active killer and neutralize him without using a firearm.

As a side note, I presented a short module of this material to an all-female knife class I taught this weekend.  The students learned how to identify the best ambush sites and how to use teamwork to take out an active killer.  All of them did very well!  I’ll tell you, it’s hard to fight two-three people when a couple are grabbing your gun and another is stabbing you in the throat! 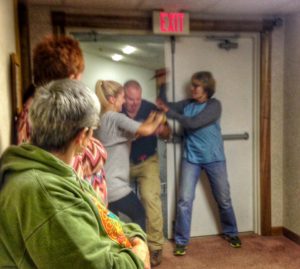 Students in my knife class Saturday. They found a proper ambush location and attacked when I (playing the role of a terrorist) made entry. One woman grabbed the gun and kept the muzzle pointed away from her and her partner. The second woman stabbed me repeatedly in the neck (with a training knife).

If you can’t ever imagine yourself fighting off a terrorist and your plan is to “lock down” and wait for police.  You’d best read “Run, Hide, Fight” and learn about the weaknesses inherent in this course of action.

No matter which response option you choose, you should recognize that a terrorist attack of the magnitude of those in Paris would quickly overwhelm our current medical system.  You will need to be able to take care of yourself for quite some time until you can be transported to the hospital.  Learn how to do it in Field Medicine for Terrorist Attacks.

Folks, these terrorist attacks aren’t over.  they are only going to increase in both frequency and carnage in the future.  If you read the articles I linked to above and embrace the ideas I described, you will be better prepared than 99% of the population in the event that a terrorist attack happens in your home town.

There are relatively few books that talk about terrorist attacks like the one we saw in Paris.  The few I recommend for further research are:

Check them out.  They will give you a graduate level education on synchronized and symphonic terrorist attacks against civilian targets.