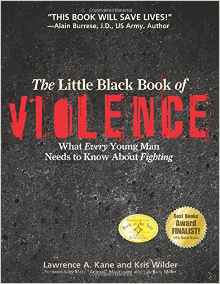 It may come as a shock to you, but it’s a fact.  Men and women are different.

If you are married or in a relationship with a member of the opposite sex, you know this.  Men think about things in a different way, process information differently, and are exposed to different dangers than women.  So why should we have one general set of “rules” for handling the broad spectrum of violence that occurs across both genders?

We shouldn’t.  While some individual pieces of advice work well for both sexes, there isn’t a lot of overlap in the combatives world.  Take a look at these generalized differences in patterns of criminal attack between men and women:

Looking at the very basic differences above, it’s easy to see that self protection advice given to one gender may not be appropriate for the other.  Unfortunately, most self defense and combatives books lump everyone together and provide the same solutions to vastly different problems.

I was pleased to see this issue addressed in Kane and Wilder’s The Little Black Book of Violence: What Every Young Man Needs to Know About Fighting.  The book is unabashedly written for men and covers a lot of territory that gets glossed over in many other male-oriented fighting books.  Books for men tend to focus on the “how”.  How to block a punch, how to throw a kick, etc.  They don’t focus on the “whys”.  Issues like “Why do men fight?“and “Why are men chosen as victims?” are rarely explored.

This book changes everything.

It is one of the absolute best books I’ve ever read about teaching men how to recognize, avoid, and respond to the likely threats they will face.  The concepts it contains are simple, yet of vital importance.

The book is broken into three sections:

–“Before the Violence” discusses awareness issues, recognition of criminal attack patterns and ways to de-escalate.

–“During the Violent Encounter” focuses on the physical technique that a man needs to employ in order to win.

–“The Aftermath of Violence” talks about dealing with the courts, the police, and many other topics that aren’t often discussed.

There is more wisdom contained in this book than most other “fighting” books on the market.  If you are a male and you truly want to understand the realities of violence, this one needs to be on your shelf.

The book is available at local bookstores or on Amazon.com.  Please consider purchasing it (or any other item from Amazon) through one of my affiliate links.  You won’t pay any more, but I’ll get a small cut of Amazon’s profit. I use that money to buy more books so I can do more reviews like this.