Cops around the country have recently been targeted by members of the community who have thrown buckets of water on the officers as they are making arrests.  If you haven’t seen the news and videos about this new trend, check out Dangerous new viral challenge: Assault police officers with water buckets.

This water throwing has the potential to create some serious consequences.  People think “it’s just water” and write the incidents off as harmless horseplay.  Those people don’t understand the reality of the situation.

Cops are carrying expensive electronics that can be damaged or ruined by being submerged in water.  Most people don’t realize that a police radio can cost up to $5000.  A Taser costs more than $1000.  Both of these electronic devices can be ruined by water exposure.  Body cameras may be damaged as well.

Body armor (also costing over $1000) loses effectiveness when drenched in water.  Every armor manufacturer cautions against submerging ballistic vests in water.  The water can cause long term ballistic degradation.  While the vests are wet, they don’t stop bullets as well as when they are dry.

In addition to the damage caused to sensitive electronics, the soaked officers will have to go back to the station and change uniforms.  That places them out of service.  While changing, they won’t be responding to your emergency calls for assistance.

Soaking the cops with water leads to a lot of unintended consequences.  Your tax dollars pay for all those high dollar electronic items.  The cops who are out of service can’t protect the public.  I think most folks understand that soaking the cops is a bad idea.

An even greater problem will be created when some jackass decides to throw something other than water.  I’m worried that we’ll soon see people throwing acid, flammable liquids, or the “Milkshakes” that contained Quikrete thrown in a recent protest in Portland.. We may also see people throwing urine and excrement like criminals do in prison.

As soon as someone throws acid or gasoline, we will have a rash of police shootings.  Cops can’t tell what’s in the bucket you are tossing at them.  After a cop gets burnt or injured, cops will start shooting everyone who throws any liquid in their direction.  That will further inflame a segment of the population who is already hostile to the police.  Cities will burn.  We can’t let that happen.

The cops in the initial video release were neither proactive nor reactive regarding the water throwers. I don’t think simply walking away is the best course of action moving forward. If the criminals throwing the water suffer no consequences for their actions, they will likely become even more emboldened and we’ll see attacks escalate.  I think the cops need to act to place the water throwers under immediate arrest.  Failing to act in this situation will just cause it to become worse in the future.

Even if someone is just throwing water, it still violates several laws. In Ohio, the water thrower would be guilty of “disorderly conduct” (recklessly causing inconvenience, annoyance, or alarm). If the actions interfered with legal police duties, the water thrower would also be guilty of “obstruction of official business.” If the objects thrown are intended to cause injury, it would be an assault as well.  Any destruction of police property would be a form of vandalism.

The cops need to be empowered to arrest the offenders.

That starts at the top.  I think the cops failed to act in many last week’s water throwing cases because they were uncertain that they would be supported by their administration and the politicians the administration serves.  Police leaders need to support their officers and send the message that they encourage the arrest of any offender who throws water on the police.  That support needs to be echoed by city politicians and by prosecutors.  This isn’t harmless child’s play.  If we don’t stop this soon, people will be killed.

The administrative support needs to be supplemented by a public information campaign.  Police media relations officers need to be contacting members of the news media and discussing the potential harm that water throwing can create.  City leaders in the affected areas should be doing press conferences and community meetings with stakeholder groups to reduce the water throwing.  No one wants innocent water throwers to be shot by the police, but that is exactly what will happen if we don’t work together as a community to solve this problem. 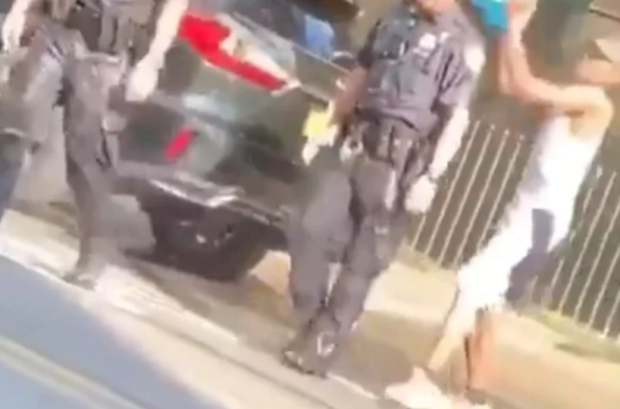 What should the individual cops do to prevent these situations? How should cops arrest the criminals without appearing like they are engaging in unjust or unreasonable retaliation against the people in the neighborhood?

One possible solution is that officers don’t act unless they are in groups of at least three or more. Two cops can handle the arrest, while a third watches the crowd. I think proactively spraying any of the water throwers with pepper spray would be objectively reasonable. With a stream formulation, you should be able to hit the water throwers before they get close enough to douse the officers. A pepperball gun may be an even better option as it leaves a remnant of the powder in the air, thus achieving a type of “area denial.”  If possible, anyone who is sprayed should be immediately arrested.  If that is not possible, body cam and cruiser camera footage should be widely circulated in an attempt to identify the offender.

I think Tasers may be a legally reasonable response, but probably not the best solution. If the crowd is throwing flammable liquids, those incendiaries could be ignited by a Taser spark, thereby creating a big risk of injury for anyone nearby.

This isn’t the ultimate solution.  There are problems with group response tactics. Waiting for a “posse” is going to delay police response to crimes in progress. It’s also going to look even more like an “invading force” to the residents who are already antagonistic to police presence. How do we protect the officers, arrest the criminals, and not further enrage a subset of the populace who already disapproves of police action?

We can’t do it solely by arresting people.  The city leadership needs to get in front of this issue and rationally explain the danger of throwing things at the cops.  They should explain that offenders will be identified and prosecuted.  They should also explain that officers will use reasonable levels of force to protect themselves from attacks.  Those actions, combined with rapid arrest and prosecution of any offending parties should reduce the number of police soaking attacks.

With that said, officers need to exercise some restraint as well.  There are reports of some of these videos arising when cops have tried to break up neighborhood water fights.  When a cop gets in the middle of a squirt gun fight, he’s probably going to get wet.  It’s summer.  It’s hot outside.  Let people play in the water.  Unless there is a serious risk of someone being injured, I would suggest that cops exercise their discretion and not get involved in breaking up community water fights.  A friendly squirt gun battle could turn very serious if the wrong people lose their tempers.  In my opinion, it’s best to just let that stuff go.  I would suggest that supervisors monitor the radio for calls about water fights and pull officers off any dispatched water fight calls unless someone is at risk of injury.

On the street level, officers need to protect themselves.  When dealing with large groups, officers should be wearing eye protection.  Many cops will remember all the Tyvek suits issued after the post 9/11 anthrax scare.  Those suits are probably still sitting in a lot of police storage closets.  They might provide a modicum of protection against bodily fluids or thrown caustic agents.  It’s probably worth re-issuing that gear if cop-soaking becomes a sport in your jurisdiction.   Even a good raincoat is better than nothing when people are tossing nasty liquids.

Cops need to ensure that their EMS/Fire partners can set up hasty decontamination stations.  In areas where these soakings are taking place, cops and firefighters need to get together and talk about how best to plan for a rapid decontamination in the event an officer is soaked with urine, acid, or a flammable liquid

We can’t ignore this problem.  Developing a consensus solution and applying it consistently will protect both officers and the public.

Thanks to all my friends who helped me hash out this issue on my Facebook page.