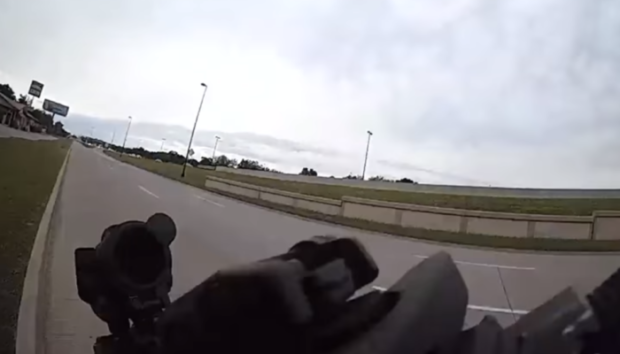 Click the link below and watch the body camera video of a police officer shooting an active killer.

A suspect shot victims at two different public locations, threatened a hotel employee with a gun, and then ran out onto the highway where he was standing in the middle of traffic firing rounds at the cars that drove past him.

Now, place yourself in the role of this officer.  Would you shoot this guy?  OF COURSE YOU WOULD!

Look at his backstop.  If he misses or the bullets travel through the bad guy he will hit a busy highway full of oncoming traffic.  Not good. Would you shoot back now?  I’m betting your answer didn’t change.

My guess is that any one of you will be dumping bullets in that guy’s direction as fast as you can until he stopped shooting.  I would too.  I’d feel really bad if I missed and hit someone else, but ultimately, I’m still going to keep firing.  What is my alternative?  Not to shoot because there are some cars coming and allow the man to kill multiple people?   Nope, sometimes you have to take the shot and deal with the consequences.

I’ve been in some training classes where we have done elaborate range training drills trying to maneuver under fire to get to a location where we could shoot with a safe backstop.  I’ve always thought there is a limited value to such drills.

Realize that safe backstops are great, but as you maneuver, people are being killed!   How long do you want to delay and take the chance of some innocent motorist being hit while you find your safe backstop?

Do you realize that bullets don’t always take a straight path through bodies?  Sometimes they bounce around and come out where you least expect them to.  It would really suck to take five seconds (letting three innocent people get hit) to move into a position where I could hit a concrete Jersey-wall after my through-and-through shot only to have my bullet skip off the bad guy’s skull and hit someone else anyway.

One other thing that most people fail to consider in situations like this is the question of the attacker’s backstop.  Where are HIS bullets going?  You can bet that he doesn’t care!  The longer you let him take shots, the more innocent people will be killed.  It ultimately comes down to one issue: do I trust myself to take the shot and take the chance of missing or do I let him spray rounds into oncoming traffic?  Which would cause the most harm?

I’m not telling anyone to ignore the backstop.  If you can move to a position with a safer backstop without risk to yourself or others, then by all means DO IT!  But sometimes you just have to take the shot.

This officer did an astounding job to stop an active killer.