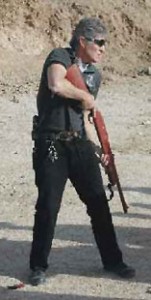 Last week one of the world’s truly great firearms instructors passed away.  Louis Awerbuck served in the South African Defense force before moving to the USA to teach at Gunsite.  He was chief range master at Gunsite until 1987 when he formed his own company, Yavapai Firearms Academy.

He wrote five books and was known for his critical thinking, superior diagnostic abilities, and innovative target designs.  I regret that I never got to train with Mr. Awerbuck, but I’m glad to have had the opportunity to know him through his writing.  His books and commentary are some of the best writing in the field.

Louis also wrote the “Training and Tactics” column in SWAT magazine.  It was always the first article I read when opening SWAT.

I was reading his column in the February 2014 edition last night.  In it, he reflected on his immanent demise and shared the wisdom that he had acquired through more than 30 years in the firearms training business.  He wrote the following:

“…mention of achievements in this article should therefore rhetorically be read as “How well did I perform as temporary keeper of the flame?”

Because when all is said and done, for centuries very few men have come up with an original idea in the fields of firearms, strategy, and tactics.  And I am not one of those select few…..

Summing up, mine has been a four-decades long study of war- especially how to avoid it.  I have studied the Old Ones’ wisdom.  I have done and do ongoing research of valid documentation, and have been the fortunate recipient of the modern sages’ and mentors’ freely passed on knowledge.

Looking objectively at any possible legacy I may leave behind, I have to admit that I won’t be leaving so much as one footprint in the sand.  All I’ve done is to have been a short term keeper of the flame, entrusted in some small way to pass on the knowledge and the wisdom of those who passed before me.  As the witching hour approaches, I have come to realize that such greats as Bruce Lee left behind his Way of No Way, I will sadly leave a Legacy of No Legacy.

But for a short period of time, I was blessed to carry the torch- and that was enough.”

For those of you who currently carry the torch, learn from the greats like Louis and take your torch-carrying responsibilities seriously.  There are currently shooters who are on the path of knowledge, looking to learn the best techniques and tactics available.  It’s our job as torch-carriers to show them the light.

If you want to read more words of wisdom from Louis Awerbuck, I would suggest starting with his book Tactical Reality and then move on to his second book, More Tactical Reality.  The type of critical thinking Louis displays in these volumes is seldom seen in the current mass-market firearms and tactics books.