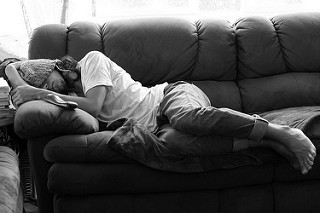 Imagine hearing a noise in your house at night. You investigate only to find something like this in your living room. You don’t know the man. What would you do?

Read the first article on this page.

Imagine a similar scenario.  You hear noises in your house at night.  Upon investigation, you find a man you don’t know sleeping on your couch. What do you do?

The homeowner in this story shot the intruder.  No doubt many of you would make the same decision.

There isn’t a week that goes by when I don’t hear someone saying “I don’t care who it is.  If I find somebody I don’t know in my own house, I’m going to kill him.”  With an increasing number of states implementing Castle Doctrine, it may be legal for most of you to do just that.  But being legal doesn’t mean it’s the right solution.

I think all the “I’m gonna shoot anyone in my house” folks are being extremely short sighted and setting themselves up for a nightmare if they continue to make such ludicrous statements.

Anyone?  You’d shoot anyone?  What if you find the five year old neighbor kid in your house?  What if the “intruder” was a 90-year old woman?  Would you shoot those folks?

Let me tell you about some situations that I’ve personally responded to in my former police career:

Think about these situations.  Would you really want to shoot an elderly woman, a cop checking to make sure you aren’t dead, or your son’s friends?  That doesn’t seem like a very good plan to me.

Are you still going to shoot anyone you find in your house no matter the circumstance?

I’m all for shooting anyone in your house who is presenting a clear danger to the safety of you or your family.  I’m not so keen on shooting folks who don’t need to be shot.  Gun owners need to be both smarter and more discriminating in who they consider as “threats.”  Being able to calm yourself down quickly and rationally analyze the situation you are experiencing is a super power worthy of cultivation.

Even if the shooting is legally justified, would you want to endure the moral consequences of shooting a person who isn’t a threat to you?  How would you like it when all your young children’s classmates are scared to talk to their friend’s “killer” father?  Have you thought about how expensive it is to replace the carpet and clean up the bloodstains in your house?  How about the forthcoming lawsuit?  Have you stashed away an extra $50K to pay for the lawyer to defend your “innocence?”

What can you do in lieu of shooting an intruder who doesn’t present an immediate threat?

First, to avoid the problem, lock your damn doors!   Most drunks won’t break in.

If you do find someone in your house, the safest thing to do is to arm yourself and then call the police. Don’t wake him up. Let the police come and remove him.

If he is awake, take a position of cover between the suspect and your other family members.  Call the police and order him to leave. Give the dispatcher the basic information then set the phone on the ground so that your interactions with the intruder will be saved on the 911 recordings.

Don’t try to hold him at gunpoint (or baseball bat point) or try to restrain him. Just get a good description and tell him to get out.  Hopefully. the police will catch him as he stumbles away.  Even if they don’t, you no longer have a problem to handle.

I’d highly suggest that you read Larry Lindenman’s incredibly informative series on “Managing the no shoot…yet.”  (Part One, Part Two, Part Three) Larry describes some truly innovative tactics for dealing with situations like these.  I took his class on the topic a couple weeks ago at the Rangemaster Tactical Conference.  The material is truly something that every armed citizen should master.

Learn something new.  Drop the macho braggadocio.  Be smart about who you need to shoot.