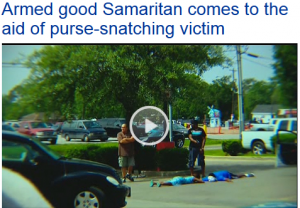 In Houston Texas, a woman was walking out of a store when she became the victim of a purse snatching.  The woman fought for her purse, holding on as her attacker attempted to get away in a car driven by an accomplice.  The tug-of-war battle became serious when the car sped away; dragging the woman whose purse was being stolen.

An armed citizen noticed the confrontation and took action.  He confronted the thieves at gunpoint and held them until police arrived.  The victim got her purse back, no one was hurt, and the bad guys went to jail.  Happy ending, right?  Watch the surveillance video of the incident below and see if your opinion changes.  For more information, check out the news article HERE.

When everything turns out well (as it did here), we don’t tend to critically evaluate our actions.  Because of this, we often miss critical learning points.  There is a saying that describes the process perfectly: “Good luck reinforces bad tactics.”  Even if the outcome is positive, the process whereby that outcome is achieved could be seriously flawed.  Let’s examine the process here and see how it can be improved….

Place yourself in the role of the victim.  You are walking out of a store with two young children in tow.  Another woman grabs your purse and jumps into a car.  Ask yourself the following questions:

–  What could you do to prevent the attack in the first place?  How do you hold your purse so that access to potential thieves is limited?  How close do you allow people to get in public spaces?  Is that distance different for men than it is for women?  If so, why?

I don’t carry a purse, so my advice may be of minimal value.  But I have played the role of a purse snatcher in force on force training sessions in the women’s self defense classes I teach.  I’ve found that purses held under the arm (like a football) are the hardest for me to take.  I would strongly advise women to carry their purses in this manner to reduce theft attempts.  I don’t like having the strap wrapped around the woman’s body or neck.  The strap may cause injury if the woman is dragged by the attacker, especially if the attacker is in a vehicle like she was here.

– What about your kids?  Do your resistance strategies change when you have children in your care?  Would your kids know what to do if this happened?  What strategies could you employ to get help to the scene faster?

No one thinks well when his or her life is in danger.  Devising innovative and intelligent solutions to complex problems isn’t likely under the effects of adrenaline.  It’s best to ask yourself these questions beforehand and come up with a plan before the event is actually taking place.  Think about these questions and come up with a plan for what actions you would take if you are confronted with a similar scenario.

Now let’s take a look at the actions of the Good Samaritan here.  If you are an armed citizen, would you have done the same thing? Ask yourself the following questions:

– Under what circumstances would you intervene in a crime that was being committed against a person who was not a family member or friend?  What type of information would you need in order to decide if the “victim” wasn’t somehow at fault in the incident?

– Is the gun the best tool for the job?  If so, could you access it quickly?

Many of you carry your guns in the glove compartment or console of your car rather than on your person.  If you had to retrieve it from that location, you likely wouldn’t have time to intervene in a situation moving as quickly as this one.

Stopping a criminal in a car is difficult.  There is no location a handgun round can be placed that will quickly and reliably stop the car.  Hitting the driver will eventually stop the car, but it may not be  a speedy process.  Auto glass really reduces both penetration and accuracy of handgun rounds.  The rounds also won’t penetrate the doors if any internal hardware (locking mechanism or window hardware) is hit.  People in moving vehicles have a degree of ballistic protection that is difficult to comprehend.  In the last two shootings in my police department, officers shot at criminals trying to run them over with cars.  in the two shootings, six separate rounds hit the vehicles (one .223 rifle and five .40 handgun rounds).  NONE of them penetrated into the passenger compartment.

– Have you trained how to hold someone at gunpoint?  What could the armed citizen have done better here?

First of all, he was too close.  If either of the suspects had a contact distance weapon, they could have used it.  He also didn’t have any cover.  He would be in a far better position if he had sought some hard cover and got a little distance from the bad guys.

– When you are holding criminals at gunpoint, have you considered what you may look like responding police officers?  How can you minimize the chances of getting shot by police?

When the cops rolled up, they didn’t know what was going on.  They ordered the armed citizen to drop his gun and get down on the ground.  Are you prepared to comply with such a request?  You should be.  The cops are  coming and all they see is you pointing a gun at people.  They aren’t likely to take any chances.

It would be better if you had your gun holstered.  Once compliance is obtained, holster your gun.  Keep your hand on it ready to draw if necessary, but get the gun out of your hand if you don’t need it.  Be watching for police.  As soon as they arrive, get your hands up and do whatever they tell you to do.  It would be even better if you instructed a bystander to call police and let them know that an armed citizen (along with your description) is holding robbers at gunpoint.  The more information the cops have, the less likely they are to mistakenly shoot you.

Videos like these are pure gold in terms of learning opportunities for all of you.  Watch all that you can.  Put yourself in a similar situation and “war game” your response.  Such mental preparation will dramatically enhance your performance if you are ever attacked in a similar fashion.