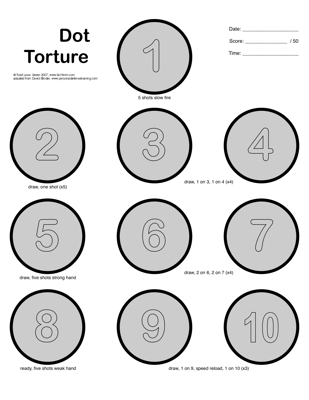 One of the shooting drills I like to use to hone my trigger control is called “Dot Torture”.  It’s relatively well known among the competitive shooting community, but many recreational or defensive shooters may have never seen it.

The drill was originally developed by David Blinder at Personal Defense Training.  It involves shooting 50 rounds at a series of two-inch circles (dots).  The target can be dowloaded from David’s website (linked above) and printed at home for use at your next training session.  I like the alternate version of the target developed by Todd Green at Pistol-Training.com.  His version of the target has directions conveniently printed under each dot. 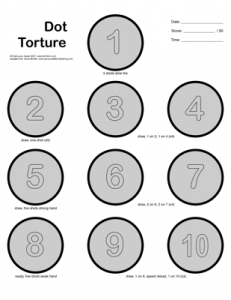 “When you can do this clean on demand, extend the length or start timing and work on speed but maintaining accuracy. If a single shot is missed, you flunk. Only hits count and only perfect practice makes perfect.”

I shoot this one at ten feet.  If I concentrate and take my time, I can usually clean it.  When I start pushing the speed a little or increase the distance, I tend to start throwing a few rounds.  It’s a great drill to practice the basics and serves as a quick “tuneup”.  It’s a good drill to use on indoor ranges that don’t allow “rapid fire”.

I shot the drill last week from 10 feet with both my duty gun (Glock 21 .45 acp in Safariland ALS holster) and my backup gun (S&W .38spl Model 12 airweight snub from an Alessi ankle holster).  I didn’t shoot as fast as I could, but I shot quickly.

While not perfect, I felt pretty good about my performance.  I dropped one shot (49/50) with my Glock. 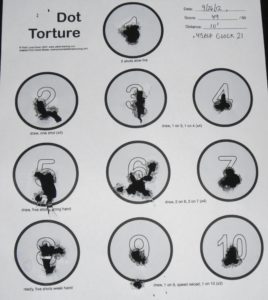 Surprisingly, I did almost as well with my .38 snub.  I dropped two shots (48/50) with it.  Both of my misses with the .38 were on stage eight (weak hand only).  That  heavy double action trigger pull with my weak hand is rough!  I know where I need to focus some more training effort! 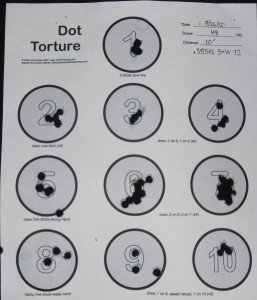 Don’t discount the wheel gun as being an outdated relic.  It takes some work to get used to the longer trigger pull, but the target above proves that the .38 snub can still be a perfectly viable choice for self protection!

Give this drill a try.  I think you’ll like it!