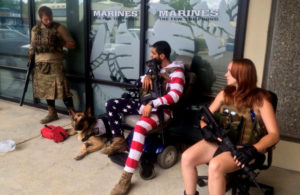 Not the best tactical plan

After last month’s terrorist attack against two military recruiting offices in Chattanooga, Tennessee, armed citizens nationwide have decided that the military members working in these offices need better protection. Per government regulations, most staff at recruiting offices are not allowed to be armed. Local police departments don’t have the resources to assign a full time officer to protect these locations. This obviously leaves the recruiting offices unprotected. Armed citizens are attempting to provide the missing protection by standing outside the offices with guns as a visual deterrent for any would-be terrorists contemplating a copycat attack.

One of my readers is attempting to organize a group of gun owners to protect his local recruiting office. He sent me the following question (edited for brevity and to conceal his identity):

All I’ve come up with so far is to sit in the parking lot in the car and keep watch. The problem with that is that a terrorist will hit hard and fast. Unless we are right there, ready to go, they will be in and out before we can take any action.

Our local Marine office could be attacked from either front or back. And in the back there is a tree line that is actually in the back yards of homes on the street behind the center. I don’t see a good way to cover both at the same time. I guess one could park a car at the end of the parking lot and then partially cover both front and back.

So I thought at first it was a great idea and a good thing to do, but I am gradually coming to the conclusion that there isn’t any good way to really make a difference. Not being able to stand out in the open is both good and bad. The bad is that you are not a visible deterrence and the good is that you aren’t so likely to be the first one shot.

Maybe it’s better to be there in the parking lot, better than nothing at least. It might be possible to engage the attackers, even though it might be too late for the guys inside. As you know, they are not allowed to be armed (stupid!) and they are advised to not wear uniforms. Indeed, when I visited them last week, the two guys were in civvies.

I don’t know what to do. Any thoughts?”

Here is my response. My thoughts are general tactical guidelines regarding the kind of things I would be thinking about if I were guarding a recruiting center. The advice may not apply to your individual location, so don’t blindly follow my advice if it doesn’t fit your situation or wouldn’t work given your particular skill levels. Use the information, but think for yourself and tailor a plan to best fit your individual circumstances.

The first thing to ask yourself is “Are Military recruiting centers a likely target in the future?” I believe the answer to that question is still “yes.” Islamic terrorists see our military members (especially the unarmed ones) as a very vulnerable target. This remains true worldwide. Think about the British soldier whose head was chopped off on a public street outside a military base in England last year. Our military stationed stateside are vulnerable and the Islamic terrorists know that. I think the recruiting offices will remain a likely terrorism target for some time in the future.

The mistake that many folks will make is to assume that a future attack will look just like the previous attacks because the targets are similar. To assume that would be a serious error. We know that Islamic terrorists are very smart about a lot of their attacks. They study previous attacks, both here and abroad and learn from their prior mistakes. A future attack on a military recruiting station is likely to look very different from the Chattanooga attack and will likely be far more effective.

I think going low profile in a car in the parking lot is the better solution. You are right that it won’t be a deterrent, but I think a well planned attack wouldn’t be too dissuaded by a single guy standing guard outside. They would just plan to take him out first. If I was in the terrorist cell, I would intentionally target the recruiting centers with volunteer civilian guards. It would better play to the media. The terrorists want Americans to think that there is no way we can protect ourselves from their wrath. A successful hit on a guarded center would be a major PR coup for the bad guys.

If I were planning a terrorist hit on a military recruiting center, I would use two attackers. One would be armed with a scoped rifle a couple hundred yards away. He would be concealed in a mobile vehicle hide (similar to the “D.C. Snipers” some years ago). Ideally the concealed sniper would also have a driver to facilitate a quicker getaway and provide another gun in the event that police stop the fleeing vehicle.

The second attacker would be in another vehicle (ideally a heavier truck). The sniper would initiate the attack and take out the civilian guards standing out in front of the office. The second attacker would drive the car right through the front door of the recruiting center (and over the bodies of any of the civilian guards who were not yet dead). Once inside, he would exit the truck and then shoot the place up. He could leave an improvised explosive device in the vehicle to target first responders and finish off anyone he didn’t kill with the shooting attack.

The sniper would cover the driver’s back from responding cops as he shot up the place and then cover his retreat to another getaway car they had parked nearby. If they kept the attack under two minutes, they would have close to a 100% success rate. They would be in and out before the cops arrived. If a cop happened to stumble upon the shooting in progress, the sniper would take him out before he got out of his cruiser.

As a civilian guard, you are right in assuming that the attack will happen fast and you may not be too likely to have much of an effect on the outcome. Where I think a lot of the civilian guard forces are dropping the ball is that they aren’t considering how they can be effective before the gunfighting begins. These terrorists pre-plan all of their operations. An alert guard may catch them as they do their recon. If reported to the police, it might stop the attack before it happens.

In that role, again the visible guard would not be as effective. The bad guys would do the recon from farther away. A roving guard in the parking lot may be able to catch the terrorists if they slip during the planning stage.

If I was guarding the facility, I would be in a car, but I would move regularly. A single car stationary in an “overwatch” position is easy to pick out. If you are made, you will have the same problem that you would have if you were a guard standing watch at the front door. The terrorists would simply target you in your car instead of standing in front of the facility when they initiated the attack.

As to the issue of positioning in either the front or back of the facility, I would assess each position from the point of view of the attacker. Which would make for an easier target? I would spend most of my time watching that position. Inside the vehicle I would most likely arm myself with an AR-15 rifle with a low powered (something like 1-4X) magnified optic. The rifle would be quick and handy for any close range encounters, but would also be able to identify and hit a sniper up to 300 meters away. I would be wearing ceramic rifle plates carried in a “slick” carrier hidden under a loose shirt or jacket. I would also have a police scanner and a pair of powerful binoculars in the car.

One other thing to add is that I would let the staff inside the recruiting center and the local police know what you are doing. Give them your group’s license plate numbers and vehicle descriptions. People are very jumpy these days. It wouldn’t be good to be mistaken for a terrorist by the responding officers if the gunfire starts.

I hope this article provides some guidance for any of our dedicated armed citizens who want to help protect our soldiers stationed here in the USA. If you are ever in such a role, spend some time thinking like a terrorist. The best way to design a protection detail is to figure out the most effective and likely attack strategies.