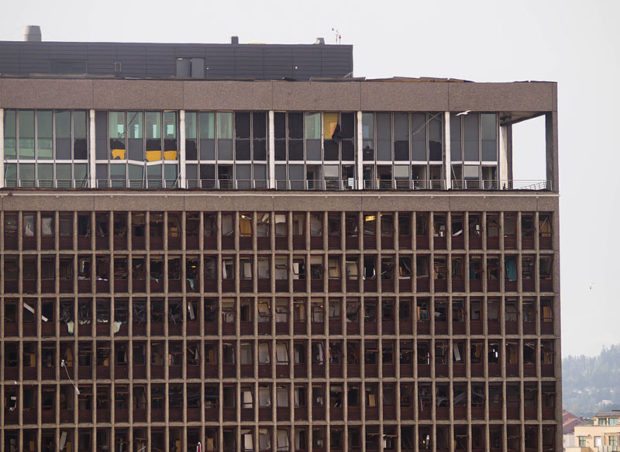 Government building in Olso after the terrorist bombing

PoliceOne.com had a recent feature article that you all should read.  It is titled Lessons from a mass-murder: How to prepare for the worst and is the account of an off-duty Norwegian policeman who was the first cop to respond to Anders Breivik’s  terrorist bombing in Oslo.  That bombing preceded his shooting attack that resulted in the deaths of 69 children.

Some things in the article that jumped out at me:

Then, with no gun — police in Norway cannot be armed even on duty without special permission — he headed around a corner and down the street toward an enormous crater left by the bomb and toward buildings spewing flames and smoke.”

He arranged for his family’s safety instantly and got them out of harm’s way before going to work.  Do you have a plan to get your family to safety if you are caught up in a terrorist attack?

2) “As first to arrive, you may need to be more a medical responder than a law enforcer, Grini says. As he moved among the injured, he wished he had carried a trauma kit in his car, including tourniquets and blood-stopping agents, even when off duty.”

Do you carry medical supplies on your person?  Do you have a larger kit in your car?  Do you know how to properly use everything?

3) “But with his quick, informal triage of those downed around him, he was able to direct the first-arriving ambulance crew to those who seemed in the most dire condition. These included a severely injured man with a mangled foot and a punctured chest on whom Grini applied a makeshift tourniquet to slow the bleeding and used a scrap of plastic to seal the sucking chest wound. “

If you don’t carry medical supplies, do you know how to improvise the items you need?

4) “He also stopped a public bus that approached the area and directed the driver to take on less-injured victims for transport to medical facilities so ambulances would be free to serve the more critically harmed.”

How many of you would have thought of this?  Get people out of the danger zone as quickly as possible.

5) “Grini found himself enraged at the ghoulishness of onlookers with cameras, some of whom pushed in to get close ups of bleeding faces and bodies. Then it occurred to him that terrorist collaborators might be in the crowd photographically documenting the damage for bragging rights.

“I saw someone with a big camera and asked him to take pictures of everyone who was taking pictures, thinking this might be useful evidence later on, perhaps even helping to identify a suspect,” he explains.”

A very good idea and one I probably wouldn’t have thought of.  Make sure you remember this.

6) “After 9/11, members of the Norwegian response team and other officers “tried to get more training,” Rye says, but “the bosses’ attitude was, ‘It’ll never happen in Norway.’ We hoped the bosses were right and we were wrong, but the Breivik attack proved we were right.”

The “it will never happen here” idea is pervasive worldwide.  What are you doing to combat it?

I’ll close this summary with another quote from the article….

“Prepare. “You never know what is going to hit you. Hope for the best, but be ready for the worst.”