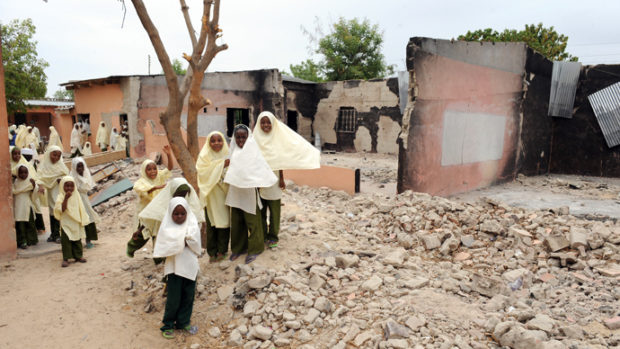 School shootings aren’t only confined to the United States.  Neither are terrorist attacks.

Last Saturday, 42 students and a teacher were killed by Islamist terrorists in Northern Nigeria.  The same group has killed more than 1600 other civilians (mostly children) in the last three years.   The group’s name is “Boko Haram”, which means “Western education is sacrilege.”   I wonder why we haven’t heard about them before?

If you want more details about the attack, check out the links below:

The tactics employed in this incident weren’t revolutionary.  The terrorists brought gasoline and set the school on fire as the students slept.  Those who weren’t burned alive were shot by the terrorists as they fled the burning school dorm.

That particular tactic wouldn’t likely work in the USA because schools are generally made of more fireproof building materials.  But the same idea has been employed by numerous school killers over the years.  The Columbine killers initially planned to detonate a bomb in the school cafeteria, forcing the survivors to flee the building.  The plan was to shoot them in the parking lot.  Two young boys used a similar tactic in 1997 when they pulled the fire alarm in their junior high school and shot the students as they exited the building.

So what lessons can residents of the USA and other western countries learn from an event like this?

The first is that Islamist terrorists will not hesitate to use children as targets.  If this incident doesn’t convince you, take a look at the Beslan School Massacre.  Do you think there are Islamist terrorists operating in the United States?  There most certainly are.  Then why do most people fail to understand that our schools are vulnerable to attack?  We need to do much more to protect our nation’s children.

The second is that anytime you have a mass evacuation from a building for any reason, the evacuees are extremely vulnerable to attack.  They are likely corralled into a designated path and are moving to a pre-identified evacuation area.  Either of those places can be targeted by an attacker.  Teach your children to be especially careful during any evacuation and to be ready to flee (even back inside the school) at the first indication of gunfire.

As I’ve said before, we need to pay attention to these international attacks.  It’s only a matter of time before they start happening here.

If you don’t want to miss any other articles like this, please sign up for my email updates.