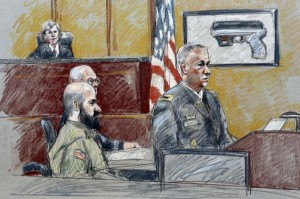 Reading through some of the transcripts of the trial involving the first Fort Hood Active Shooter, I realized that the average gun owner/ CCW permit holder is wholly unprepared for anything but the most basic of gunfights.

Read the article below and ask yourself if you are prepared for a gunfight like it describes.

The police officer here was responding to a call involving shots fired.  As she approached the scene on foot, she saw a man dressed in army fatigues carrying a gun.  The man pointed his gun at the officer and she was temporarily blinded by his laser sight flashing across her eyes.  She retreated behind a wall for cover and began to fire as the shooter fired his weapon on the run towards her position.

That’s a lot of activity to occur in just a few seconds.  Did your instructor train you how to deal with any of those eventualities in your concealed carry class?  Would you be prepared for it?  Here are some questions you should ask yourself:

1) Cover.  Is moving to cover a reflexive act for you?  Can you quickly identify cover and move to it without a thought?  Have you ever shot from behind cover?  Do you know how to maximally utilize your cover without over exposing yourself?

2) Charging attackers.  Have you ever shot at a moving target?  How about training with simunitions or airsoft?  Do you have a plan for dealing with an attacker running directly towards you?

3) Close quarters shooting.  The final gunfight between the officer and the killer took place at a distance of less than eight FEET.  That’s almost touching distance.  Have you practiced shooting from a retention position?

4) Alternate position shooting.  The officer here was on the ground, partially disabled by three gunshot wounds.  Have you ever fired your gun from the seated position or from a position on the ground?

5) Malfunctions.  Both the officer and the killer had malfunctions.  Do you know how to clear a malfunction reflexively?  Have you trained to transition to alternate weapons in the event you can’t clear it?

6) Weapon retention.  You lose cool points in the gunfight if your gun is kicked out of your hand by your attacker.  Do you know any techniques for keeping your gun in your hand if someone tries to grab or kick it?

7) Tactical medicine.  Do you know how to treat an arterial bleed from a gunshot wound?  This officer used a wall to help provide direct pressure to her wound until medical help could arrive.  In the worst case scenario, you can bleed to death in less than two minutes.  You have to be able to stop that kind of bleeding and your standard first aid class isn’t enough.

The average police officer is not a highly trained gunfighter.  Police training isn’t nearly as complete as most expect it to be.  It clearly wasn’t enough to give this officer the ability to win her gunfight.  Even though most police training is inadequate, it is FAR more extensive than any CCW class.  What makes you think your four-hour certification class gives you the skills you need to win a gunfight?

If you carry a gun, you probably need more training than you currently have.  Training in the above listed concepts is widely available to everyone in the USA.  It’s up to you to seek it out.  If you are in the central Ohio area, my close quarters shooting courses will cover many of the concepts that are currently not addressed in the standard CCW class.