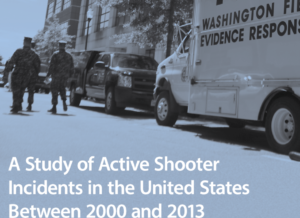 Last week, the FBI released its most recent research report on active shooters in the United States.  The 47-page report is quite informative and worth the time to read.

The study looks at a very small and well defined subset of mass shootings.  According to the publication:

“This is not a study of mass killings or mass shootings, but rather a study of a specific type of shooting situation law enforcement and the public may face. Incidents identified in this study do not encompass all gun-related situations; therefore caution should be taken when using this information without placing it in context. Specifically, shootings that resulted from gang or drug violence—pervasive, long-tracked, criminal acts that could also affect the public—were not included in this study. In addition, other gun-related shootings were not included when those incidents appeared generally not to have put others in peril (e.g., the accidental discharge of a firearm in a school building or a person who chose to publicly commit suicide in a parking lot). The study does not encompass all mass killings or shootings in public places and therefore is limited in its scope.”

Using this definition, the FBI was able to find 160 separate shootings that met the criteria over a 13-year period.  That database of shootings formed the basis of the study.

For those of you who don’t have the time or desire to read the entire paper, I’ve listed some of its highlights (along with my commentary) below.  Let’s dig in… 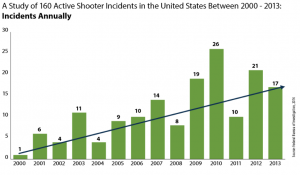 Admittedly, this “increase” can be altered by the types of shootings included in the study.  Not everyone agrees with the FBI.  Take a look at this counterpoint as well.

2) More than 15% of the incidents involved shootings at multiple locations.  I think the trend of “mobile active killers” will likely increase.  There is currently no one in the police training field who is training officers how to deal with mobile killers.  It’s a huge hole in our collective preparation efforts.  Here is my take on some of the tactics officers may need to start using.

3) The killers initiated the assault with the killing of a family member in almost 10% of attacks.  Police officers need to do a well-being check on the suspect’s family as soon as he is identified.

4) The majority of the incidents (56%) ended by the shooter’s own initiative.  That means that the events happened so fast that police or armed citizens did not have a chance to intervene.  The idea that armed citizens can keep an “active shooter bag” full of emergency gear in the car, escape the building where the shooting is taking place, grab the gear and get inside in time to stop the killing is absolutely ludicrous for the majority of these encounters.  These shootings are “come as you are” events.  If you don’t have the gear on your person to stop the killer, you won’t be a factor in the termination of the shooting.

5) Unarmed citizens ended a significant number (13%) of events.  Armed citizens and off duty cops ended far fewer (4%).  These events tend to take place in locations where citizens are prohibited from carrying guns.  If you spend time in such a location, how are your empty hand fighting skills?  Make an honest assessment of your abilities and improve them if they need some work.

6) Only 1.3% of the shootings involved more than one shooter.  The idea that cops need to go in with a “team” of officers to engage multiple suspects isn’t tactically sound.  It takes a comparatively long time to “round up a posse” of four to five officers to make entry.  During that time frame, more people will be getting shot.  Future efforts at active shooter training should be based on single officer responses rather than “quad” or team entries.

7) The majority of the shootings took place in a business.  Almost 70% of those shooters were NOT employees or former employees at the business they shot up.  Be alert for any signs of violence or mental instability in your coworkers.  If you are a police officer, the majority of your active shooting training should take place in office buildings.  Schools and churches are common locations of violent events, but active shootings at those locations occur at roughly half the rate of those in commercial businesses.

8) Almost half of the officers who were shot while responding to active killer incidents were shot OUTSIDE by killers  who were “in open spaces where the shooters were moving through streets and between buildings.”  Police and armed citizen active shooter training MUST include military tactics such as “bounding overwatch” which cover safe movements outside when under fire.  Current police training rarely covers these tactics.

9) Time is a huge factor in response tactics.  “In 64 incidents where the duration of the incident could be ascertained, 44 (69.0%) of 64 incidents ended in 5 minutes or less, with 23 ending in 2 minutes or less.”  Speedily moving towards engagement with the shooter should be the primary guideline when teaching active shooter response tactics.  We simply don’t have any time to waste.

10) Police departments and other training organizations need to provide armed (and unarmed) citizens with quality active killer training classes.  In this study, 13% of the incidents were stopped by courageous unarmed citizens…NOT police.  These citizens should be provided training to better handle such volatile situations.

Did you read the report?  Did any of the statistics stand out for you?  Please comment below.