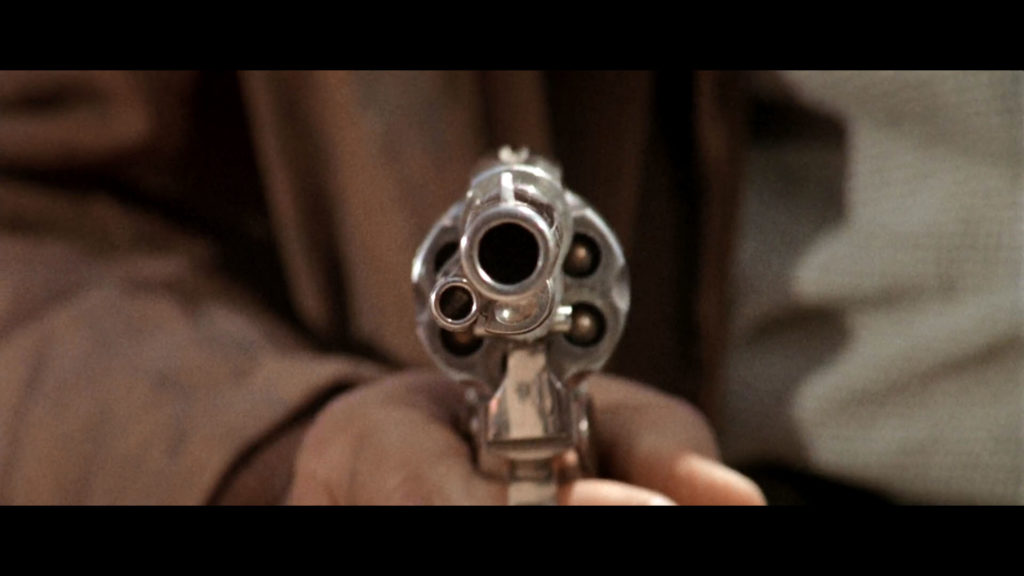 This revolver is actually loaded

Recently at work I responded to a chaotic situation.  It started out as an “Officer in Trouble” call.  That’s the call that is saved for only the most dire situations.  When a fellow cop airs that code, every other cop within about 10 miles (regardless of jurisdiction) rolls out.  And by “roll out”, I mean move heaven and earth to get to the scene as quickly as possible because one of his co-workers is likely getting hurt or killed.

A police sergeant from a neighboring agency put out that call last week.  When the call aired I was only about a quarter of a mile away.  Light up the roof.  Hit the siren.  Go.

I was the first backup car on scene and drove into a mess that consisted of a woman screaming “rape”, a guy wearing sweat pants with a badge in his hand, a uniformed police officer, and an unknown man holding a gun.  Several of these characters were fighting on the ground in the middle of a busy four-lane road.

The uniformed cop who put out the call and I got things handled pretty quickly.  No one was seriously hurt and a crisis was averted; but let me back up a little and explain how this all came about….

A woman stole a couple very expensive purses from a department store and ran out into the parking lot.  Unbeknownst to her, she was being watched by store loss prevention officers.  One of the officers identified himself and ordered her to stop.  He gave chase when she didn’t.  The loss prevention officer was dressed as an inconspicuous shopper to better blend in.  He was wearing sweat pants and a T-shirt.

He caught up with the thief in the parking lot and tackled her.  She began striking him in the face with her closed fist and was able to break away and begin running.  Even though the store employee was taller than the criminal, she outweighed him by at least 20 pounds.

He continued the chase, knocking her to the ground again.  She again beat him until she was able to get free and resume running.

When he caught up to her the third time, they were right on the edge of a very busy road.  He took her to the ground again and began trying to restrain her.  He was on top of her in the middle of the road and trying to get his cell phone out of his pocket to call the police.  She’s still hitting him and trying to escape.

Our robber (a theft involving force is classified as a robbery in my state) got the bright idea that she needed some help.  She began yelling “Rape!  Rape!  He’s raping me!” as loud as she could.  Her cries were heard by a man driving by.  That man had a gun.  The gunman parked his car in the middle of the road, drew his gun and came to the assistance of the “rape victim”.

He pointed his gun at the loss prevention employee (who happened to be a part-time police officer as well) and said “Let her go or I’m going to shoot you in the head!”

The robber is still fighting as the loss prevention officer screams out “I’m a cop!” and thrusts his hand into the pocket of his pants to pull out his badge.  The white knight rescuer is unconvinced and likely thinks that the “rapist” is going for a gun.  He closes the distance and prepares to take a shot while the loss prevention officer and the robber continue to struggle.  Finally, the badge comes out.  The man with the gun didn’t know what to do and was just standing there with a stunned look on his face.

At that very moment, the police sergeant who made the original call drives by and sees what’s going on.  She gets out to investigate.  She has no idea what’s happening.  She sees a battered dude in sweat pants with a badge in his hand fighting hard with a woman screaming “rape”, and a guy pointing a gun at both of them.  She draws her weapon and thinking that someone is about to shoot a cop, puts out the “officer in trouble” call.

The man with the gun sees the uniformed police sergeant and the marked cruiser and decides to leave things in her hands.  He shoves the gun into his waistband, jumps into his car, and drives away.

The sergeant doesn’t have any idea what role the fleeing gunman played in this drama, but he’s gone and she sees a dude with a badge still fighting a woman in the middle of the road.  She wades in and starts to help.  By then, I’m rolling up.  I never saw the man with the gun even though he drove past me within 100 yards of the scene.

There was the potential for some life-threatening negative outcomes for everyone involved.  Fortunately, luck was on our side and everything worked out.  The bad guy (or girl in this case) goes to jail and no one is hurt except for the loss prevention officer who took a few punches to the face.

Most of you carry firearms on a daily basis and want to do the right thing.  What would you do if you were driving on a busy street in the middle of the day and you see a young male fighting with a woman who is screaming about being raped?  There’s a lot to learn from this scenario.

1) Know what you are getting into.  The law generally allows you to use deadly force to defend an innocent third party from what you believe is likely to result in serious injury or death.  The key word here is “innocent”.  A robber resisting arrest is not an innocent third party no matter how many times she yells “rape”.  You can testify all you want about what she said and how you thought she was being attacked.  It won’t matter much as you wither under the prosecutor’s questions:

“You testified that you drive this route often.  How many times have you seen a rape at that location at three p.m. in the middle of a busy four-lane road?”

“You testified that you heard the victim yell out “I’m a cop” before pulling the trigger.  Do you really believe that a police officer is going to rape a woman in the middle of a busy street in broad daylight?”

“So tell me again why you thought it was justified to kill this off duty police officer?  Is it because you believed the words of a convicted robber?  Or is it because you got a CCW permit and carry a gun so that you can kill people?”

You see how this is going to play out.  Even if you avoid conviction, you will have to take out another mortgage on your house to pay off the lawyer fees.  Things are not always as they seem.  Don’t be in a rush to save the day when you aren’t fully aware of what’s happening.

2) Have you ever trained to take a shot like this?  Hitting the correct person among two or more moving/fighting people is difficult.  Your bullseye target shooting experience or four- hour CCW class won’t give you the skill set you need to make this shot successfully.  Do you know how to close the distance and make a contact shot?  Do you know how deeply your carry ammunition penetrates in flesh?  Do you know how to alter the angle of your shot so that an over penetrating bullet doesn’t hit an innocent person?  You need to think about all of these things before you are capable of saving someone in a situation like this.

3) Be prepared for police intervention.  When the guns come out, the cops show up.  It’s almost like a rule.  When the cops show up, you don’t want to be acting aggressively with a gun in your hand.  Remember, the cops don’t know who you are.  Don’t look like a criminal suspect or pose a threat to them in any way.  Be actively watching for their arrival.  Try to avoid having a gun in your hand when they get there.

Holster up or immediately obey the officers’ commands when they arrive.  That may mean that the criminal gets away.  That’s OK, we’ll catch him later.  An escaped criminal is way better than a dead CCW permit holder who expected the cops to somehow magically know that he’s the “good guy.”

4) Don’t flee the scene of a crime.  The guy with the gun took off here.  That was probably a bad move on his part.  A poorly trained officer or another CCW carrier might decide to shoot someone fleeing the scene with a gun after they see a cop being hurt.  It’s the wrong choice to make and wouldn’t be ruled justified, but I’ve seen it happen with my own eyes.

If the initial officer aired a description of the fleeing vehicle, it would likely be stopped by other cops within minutes.  It would be considered a “felony stop” where they would order the driver out of the car and onto the ground at gunpoint.  You don’t want to be put in that position.

It’s fine to get to a position of safety, but don’t flee from the scene of a shooting or after you draw your weapon.

5) Make sure your weapon is loaded and that you are using good tactics.  I was puzzled when the loss prevention officer told me that he stuck his hand in his pocket while he was being held at gunpoint.  I wouldn’t have done that.

The officer explained to me:  “He was close enough that I could have swatted his gun away, but I didn’t need to.  He had a .38 revolver and I could see that all of the holes in the cylinder were empty.  The gun wasn’t loaded.  I knew he couldn’t shoot me if he wanted to.”

There are two issues here.  the first one was that OUR HERO’S GUN WAS UNLOADED!  Did he know that?  I don’t know.  But I do know that an unloaded gun is pretty useless against a loaded one.  Carry your weapon loaded.  You won’t have time to load it in an emergency.

The second issue is one of tactics.  If you are holding a suspect at gunpoint, don’t close to a distance where he can disarm you.  If you need to get closer (to be more sure of your shot, for instance) use a retention position or take approach from an angle that prevents the suspect from disarming you.  Don’t neglect firearms retention skills in your training regime either.  They are important.

I’m glad this story has a happy ending.  I’m also glad that the CCW permit holder tried to stop what he thought was a violent crime in progress. Let’s use this story as a way to improve all of our tactics and training so that more criminals are apprehended and fewer good guys are mistakenly shot.

This article originally appeared in the Nov/Dec 2013 issue of Concealed Carry Magazine.