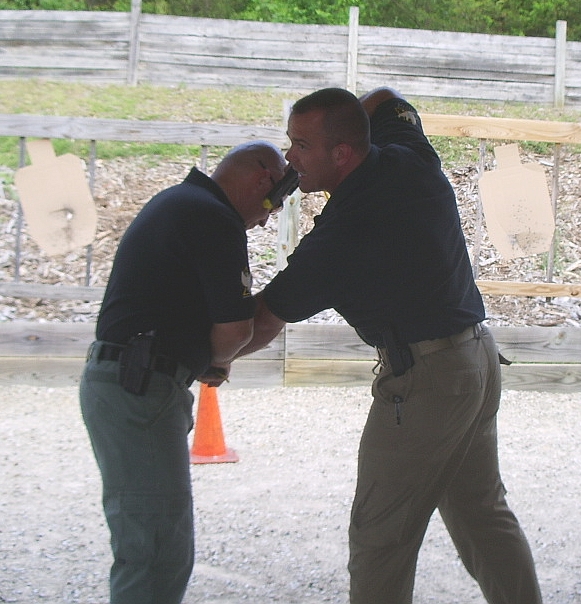 Tactics and trends change often in the firearms training community.  Some of these changes are positive.  Some amount to little more than a trainer’s attempt to differentiate himself from others in a competitive market by doing something new and different.  The “flavor of the month” trainers are constantly trying to “improve” time tested techniques in order to get a larger student base.  Most of these “improvements” can actually get a student killed.

One area where firearms training is quickly evolving is the development of techniques to address the problem of shooting at extremely close range.  Up until the early 1990’s. most trainers taught their students to stand still, draw their weapons and shoot as quickly as possible when a criminal was attempting to draw a gun at close range.  Some advocated special positions (the “speed rock” is one example), but the general idea was that the student should just work to be faster on the draw than his opponent.  It was almost like a Hollywood western movie where two guys square off and start blasting.  This technique didn’t work very well.

Trainers took a look at this information and decided that standing still and drawing was getting officers killed at close ranges.  Now, most knowledgeable trainers advocate either a hard lateral movement while drawing or closing the distance and stopping the criminal’s draw, depending on the situation.  There has been a slight change in fatality statistics since the early 1990’s when these new training techniques were implemented.  When the statistics were first reported, the FBI found that 54% of officers were killed at distances of less than five feet.  Looking at the most recent three years’ data from the table above, we find that now the percentage is around 44%.  That’s a significant drop, but it isn’t enough.  Clearly, not all officers receive state of the art training. 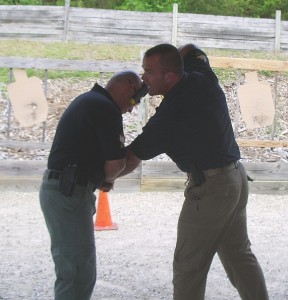 Author teaching students how to move in and stop the attacker’s draw.  This is a photo of me doing what students should NOT be doing…bringing the gun outside the thumb pectoral index retention position.

Part of quality training involves the testing of techniques advocated.  There are lots of different ways to shoot a gun and a good trainer will always strive to teach the best techniques available.  How does the trainer know what’s best?  He can’t just rely on what previous instructors have told him.  The best trainers track street performance to obtain anecdotal evidence as well as subjecting their techniques to the scrutiny of the scientific method if possible.  Unfortunately, because most cops are the antithesis of an academic, there isn’t much good science being practiced.  There are only a handful of places that actually make a scientific study of best practices in a gunfight.

There are occasional exceptions.  An interesting new close range shooting study was recently reported on PoliceOne.com.  The author, Duane Wolfe, attempted to ascertain the best course of action to take if one was faced by a criminal drawing a weapon at distances from three to six feet.  He did this by placing a shot timer on a pad at waist level and staging test subjects three, four, five, and six feet away.  When the timer beeped, the students were instructed to move as quickly to the timer as possible and strike it.  The timer recorded the time of the impact.   The strike simulated closing the distance and getting a hand on the attacker’s gun to stop his draw.  The author then compared those times with previously published data on draw times reported by The Force Science Institute.

Before you read any farther, please click the link above and read a synopsis of Mr. Wolfe’s study.

I commend the author for doing the work, testing the theory, and publishing the data.  More studies like this need to be completed.  I disagree, however, with the author’s conclusions and believe that his wholesale abandonment of the tactic of closing is likely to get officers killed.  Let me explain why…..

First, I believe that he chose an artificially long range to test.  In my experience, the best use of the “move in and stop the draw” tactic is when you are within arms’ reach of your opponent, which is generally even closer than the nearest three foot interval that the author tested.  When you get into the six foot range, it becomes much more difficult, but still possible in some circumstances.  Why are the results my actual training experiences different than the author’s results?  I don’t really know.  I would suspect that it has more to do with real world draw dynamics than anything else.

Which brings me to point number two…

The draw times established by The Force Science group are VERY optimistic!  Under real world conditions, I have seldom seen draw times lower than 1 second for a concealed gun.  That’s the problem with this data.  For that particular study, the participants started with their hands already on the gun and cover garments clear.  In real life, criminals carry the gun concealed and have to move clothing to draw it.  That takes time.  Also in real life, guns move.  Criminals generally carry guns without holsters, tucked into waistbands.  The firearms shift and move in this method of carry, making the acquisition of a consistent grip impossible.  This further slows down the draw.  These realities aren’t reflected in the numbers the author used in his study.

If the average draw time of .23 seconds is to believed, the officer wouldn’t have time to make any move!  Human reaction time to visual stimuli varies from .18-.25 seconds on average.  It just takes that long for the brain to process the information and act.  Only the fastest of the fast in this study would be able to take ANY action at all if these times were correct!  Furthermore, the author’s advice of hard lateral movement would be equally useless if these draw times were true.  How much lateral movement can you make in .05 seconds (the remaining time for the fastest people after reaction time is removed)?  It wouldn’t be enough to affect the attacker’s aim as the author suggests.

Another issue not being accounted for in this study is that most officers are taught to strike the opponent as they move in to control the gun.  One hand moves to stop the draw as the other delivers a quick palm-heel strike to the attacker’s face before it too moves to the gun.  Trust me.  Having been on the receiving end of such blows in training, I can tell you that my draw stroke was much slower after I was smashed in the face and fighting for my balance.

A final point that needs to be brought up is “What should an officer do when he/she can’t make a good lateral move like the author recommends?”  The author is assuming some distance between the officer and attacker here.  Many times there is NO distance.  The officer is first attacked physically and is being struck, choked, or held by the offender as the weapon is drawn.  This is commonly referred to as “in-fight weapons access”.  Moving offline is fine if ten feet separate you from the attacker, but what happens if the attacker is choking you from behind with one hand as he draws a pistol with the other?  How about if he is face to face with you and has you in the clinch (one hand wrapped behind your neck) preventing your escape as he tries to draw?  These are both realistic scenarios and they aren’t addressed by the study.  There may be no escape option.  The officer may have to stop the draw! 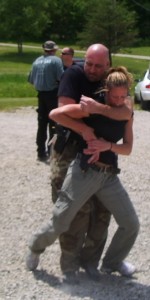 Students at TDI’s ECQ class training to stop the draw and take the attacker’s back. These type of real-world fighting positions aren’t addressed in Mr. Wolfe’s study.

My experience differs from that of the author.  I have taught hundreds of students to close the distance and stop the draw.  I’ve even taught the specific skill at several top-level international instructor training conferences.  I’ve seen it work both in training and on the street.  In fact, I even successfully used the technique myself when an angry assault suspect tried to draw a Ruger 9mm automatic on me one night.

Who is right?  You’ll have to do the work yourself and find out which technique works FOR YOU.  Get a partner, some eye protection, and a couple of airsoft guns.  Start from varying distances away from each other and try both techniques.  You’ll soon see what works and what doesn’t.

If the attacker is within arms’ reach or less than one step away, I move in and stop the draw.  If he is farther than that, I move laterally (ideally to cover) and draw.  Those guidelines make me “win” more than I “lose”.  It’s a pretty simple idea, but I’ve tested it and know it works.  Do you know what works for you?