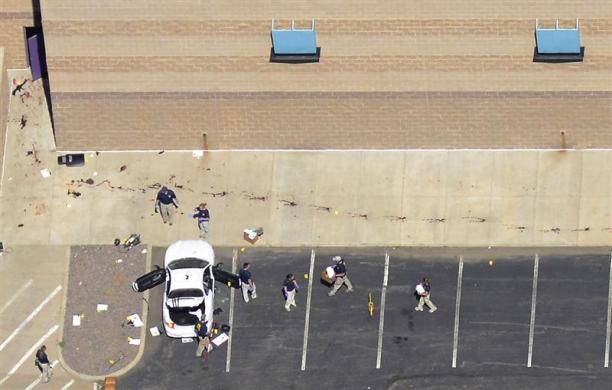 Because I was out of the country when this event occurred, I am a little late in providing my advice and analysis.  I’ve written quite a number of articles describing how active shooters think and what potential victims should be doing.  I won’t rehash all of that information here.  I’ll simply point you to a few of my articles instead.  All the advice contained within them would serve equally well if a person became caught up in an active shooter event at a theater.

A Glimpse into the Mind of an Active Shooter

If you are looking for general advice about active shooter events, check out the links above first.  They will provide a graduate-level education in active shooter survival skills.  In this article, I’m going to focus more narrowly.  I want to talk more specifically about a shooting event that occurs inside a movie theater.

A theater (especially one like the Aurora Century which prohibits concealed carry of handguns by permit holders) is exactly what an active shooter is looking for…lots of defenseless victims constrained by the physical arrangement of the room so that escape options are limited.

If you are unfamiliar with the event, I would suggest you start with the news article below.  It provides relatively complete coverage of the events that occurred.  It does have a slightly different slant (as it isn’t from the USA) than you may be used to, but the overall facts are pretty good.

Here’s what we know so far (and this info is likely to change):

A man left the midnight screening of the new Batman movie about 15 minutes after the movie started.  He walked out through an emergency exit door and apparently propped the door open somehow.  He drove his car to the now-propped door, armed himself with three guns (Remington 870, S&W AR-15, and Glock .40 pistol).  He also donned body armor, a gas mask, a tactical vest containing extra magazines, a bulletproof helmet, and even ballistic leggings, throat and groin protection.  He left one additional pistol in the car along with several thousand rounds of ammunition.

He re-entered the movie theater through the propped door and immediately tossed two grenades into the crowd.  Most reports indicate that they were tear gas grenades.  He then began shooting the shotgun, spraying the crowd with birdshot.  When he ran out of cartridges he moved on to his AR-15 rifle (equipped with a 100 round drum magazine) and fired until it malfunctioned.  He then began firing with the pistol.  No one knows exactly how many rounds he fired in total, but it was likely hundreds in just a few minutes.  As of today, there were 70 known shooting victims, with 12 of those being fatalities.  Dozens more were injured in an attempt to escape.  The shooter (who will not be named here, because I don’t want to contribute to his desire for fame and notoriety) then went back outside and was arrested without incident by responding police officers. 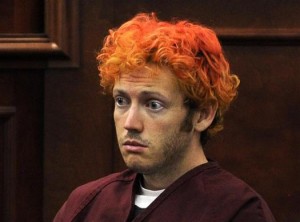 The shooter as he appeared in court.

EMS crews and hospitals were overwhelmed with victims, and those injured people who were unable to evacuate to safety had to wait more than 20 minutes for medical assistance to reach them.  Due to the massive numbers of casualties, many of the seriously wounded were transported to the hospital in the backs of police cruisers rather than ambulances.

Think about the incident I described.  The most important thing you can do right now is to pre-plan a response to a similar event.  What would you do if you were faced with a scenario like the one here?  Here are a few things I think about when I visit the movie theater….

There are those who will advocate taking a middle seat because the shooter is likely to target people along the aisles first.  That may be a good point, but I prefer better mobility to the ballistic protection offered by others’ bodies.  Remember, the emergency you face may not be a shooter, but something else (bomb, fire, gang fight, etc).  I think the aisle offers a better overall position.

3) Keep your awareness up.  Someone should have noticed that the shooter propped open the exit door.  That is very suspicious behavior that should have been reported to theater staff or police.  Nothing good can come from that action.  Don’t let denial or rationalization skew your perception about the events occurring around you.

4) Carry the right equipment.  One thing I never leave home without is a powerful flashlight (I generally carry two).  That would have been tremendously useful in a dark theater that was full of smoke.  Whether it’s used to temporarily blind the shooter, find an escape route, or to line up your sights, a flashlight would be incredibly useful.

If you can lawfully carry a gun, think about your weapon choice.  What gun would you choose if you knew you might have to fight a shooter like this guy who is covered head to toe in body armor and armed with a rifle in a dark, smoke filled theater with hundreds of panicked people running around?  For me, a ,38 snub or .380 auto would be at the bottom of the list.  Carry enough gun to do the job. 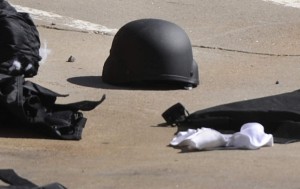 The other important thing to carry everywhere is medical gear.  If you were seriously injured and unable to evacuate, could you treat yourself and prevent your own death for nearly 30 minutes until the paramedics arrived?  What type of gear should you carry with you to self-treat a gunshot wound?  While I have a complete trauma bag in my car, sometimes a full kit is difficult to carry on your person.

At bare minimum, I carry a military triangular bandage.  While it isn’t the best piece of gear, it can be used adequately to improvise a pressure dressing, pack a wound, or create a tourniquet.  If I am wearing a jacket or a pair of pants with a large pocket, I will generally supplement the triangular bandage with a a CAT Tourniquet, some chest seals, and a flat pack of duct tape.  I can treat almost any wound adequately with those items and they don’t take up too much space.

5) Think about what else you will need to escape.  Good footwear comes to mind immediately.  I don’t go out in public anywhere I may have to run while wearing flip-flops.  Wear some real shoes!  I bet the girl who was wearing the pink flip flops that were abandoned in the picture below wished she had been wearing anything else!  I wonder if those are her bloody footprints leading away from the door? 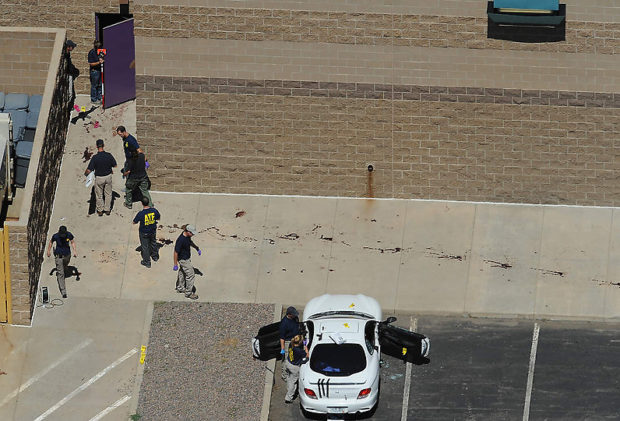 Also think about where you park your car. I prefer to park a little bit farther away from the theater (nose out) so that I can make an escape if necessary without being blocked in by responding emergency vehicles and crime scene tape. 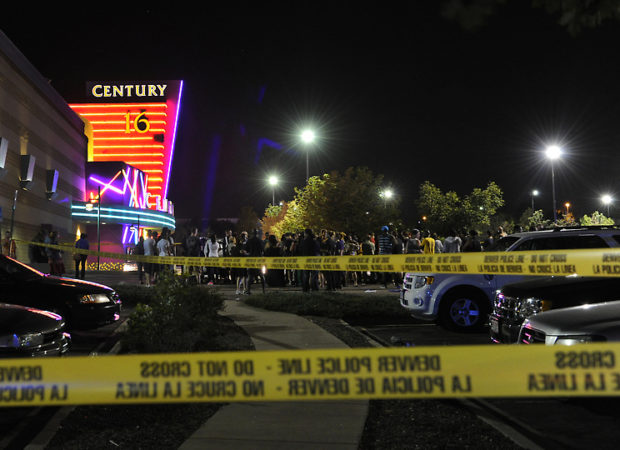 Would your car be like one of these…blocked in by emergency vehicles and crime scene tape? If it is, you won’t be getting home for a long time!

6) Training is important.  Think about this scenario again.  It’s dark and smoky.  You have hundreds of innocent people running around.  A man is firing at you with a rifle from 40-70 feet away (the distance from which most of the victims were shot).  The shooter is covered head to toe in body armor that will defeat your handgun round.  The only shot that will bring him down is a shot to his gas mask-covered face.  Could you actually hit the target with your chosen CCW gun?  That’s a tough shot to make.  Don’t delude yourself that your military experience from 30 years ago or your CCW class gave you the skills to do it.  It’s never been easier to get quality professional firearms training.  If you are serious about protecting yourself and your loved ones, it would be in your best interest to find a good instructor or shooting school and take some classes.

7) You better learn a little more about bombs.  Bombs are becoming a real trend among active shooters.  In this incident, the shooter booby trapped his home with improvised explosives that were designed to create a diversionary explosion and delay law enforcement response to the scene of the theater shooting.  Luckily, they didn’t detonate (or more correctly deflagrate).  The active shooter in Norway had a bomb on his person.  The terrorists in Mumbai used explosives as well.  I predicted several years ago that more and more mass killers will be using bombs in the future, and my predictions have held true.  You should definitely have at least a basic understanding of explosive principles if you want to be a player in this game. 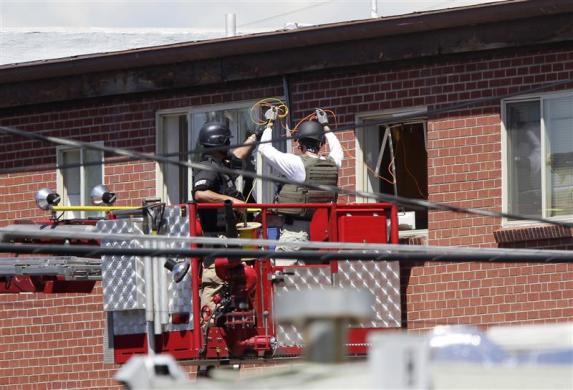 If you want some decent basic knowledge about bombs and bombers, check out my article All About Bombs.

Like I said at the beginning of the article, I’m a little late to the game in providing my take on things.  I do hope that the information I have provided has helped you better prepare for the horrible possibility that you will be present during an mass killing event.

Also, please check out the links below.  They are to articles providing additional advice about the Aurora shooting by well-respected trainers.  The articles I linked to have the best tactical information that I have seen to date.

From ITS Tactical- “Deconstructing the Aurora Colorado Shooting”

Article images from Rueters.com and DenverPost.com. (links intact).   Please check out these websites for the best photos available.