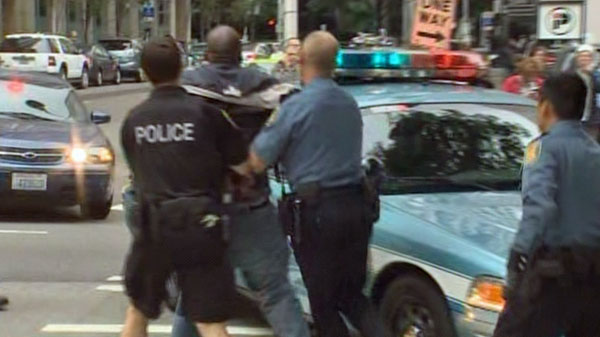 A Seattle TV videographer was in the right place at the right time and caught the take down of a robbery suspect on camera.  The video is remarkably clear and shows just how chaotic criminal encounters can become.

In the incident, a man allegedly robbed a jewelry store.  As he ran out of the store, a doorman working at a nearby hotel gave chase and tackled the robber.  The robber fired three shots at the doorman, hitting him once in the arm.  Several other citizens then piled on the robber and held him until police arrived.

The entire story and the edited video can be viewed at the link below. Take a look at what happened.

There are several learning points that we can pick out from watching this video.  Let’s talk about a few of them…

1) Take note of just how many people it takes to hold the robber down.  It’s relatively easy to put the beatdown on a criminal suspect, but it’s much harder to actually control him without doing damage.   Consider this fact when you may see three or more cops fighting with a single criminal who doesn’t want to go to jail.  When my less experienced friends see something like that, they usually exclaim that four on one odds “aren’t fair”.

When a cop or group of cops tries to control someone who is violently resisting, they can’t afford to be “fair”.  They MUST win the fight!  If they don’t quickly get the bad guy under control, the bad guy can hurt more people.  “Fairness” really doesn’t come into play.  Cops and legally armed citizens are not required to be “fair”; they only have to be “reasonable” and stop the aggression when the criminal is under control. 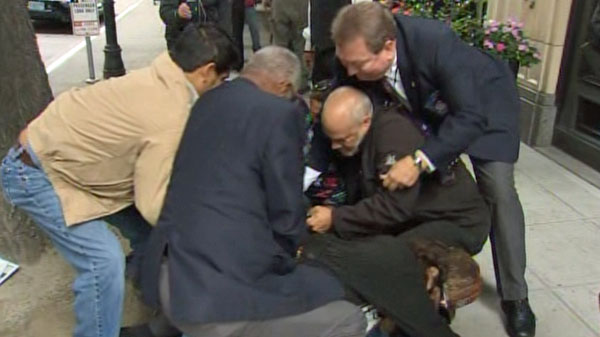 How many people does it take to restrain the bad guy?

In my opinion, these bystanders exercised remarkable restraint.  I didn’t see a single punch or kick being thrown.  While restraint is admirable, it can sometimes cause problems.  I don’t think any court in the country would have an issue with one of these bystanders kicking the bad guy in the head, punching him in the face, or dropping a knee on his neck…especially while he still had the gun.  Fighting a man with a gun is a lethal force altercation.  Make sure you use enough force to ensure your success!

– Would I intervene in an armed robbery like this doorman did?

– What is the best way to physically restrain a criminal?  Does that answer change if you have more than one person helping you?

– If you were working as a team, how could you employ one armed person as ‘lethal force cover” while the rest of you restrained the bad guy?

– Would it be smart to carry some types of handcuff or zip ties with you for such an altercation?

– Do you know how to target your attacker’s eyes and throat effectively in the event that he pulls a gun when you try to restrain him?  What are the most effective/lethal strikes you can muster?

2) Note the condition of the gun (it appears to be a Glock 19 or 23).  The slide is out of battery and the weapon has a malfunction. That happens a lot in contact distance shootings because clothing gets caught around the gun as the slide moves.  It can also be caused when the defender grabs the weapon during the firing cycle.

If it happened to the bad guy here, it could happen to you as well.  Be prepared to solve the problem. You may have to shoot an attacker at close range like this.  Do you know how to quickly clear a malfunction without a complex visual diagnostic process?  Can you do it with one hand?  If your other hand is busy striking or defending, you may have to!  If you don’t know how to reflexively clear a pistol malfunction, please check out this VIDEO from my late friend Paul Gomez.

– Do you know how to intentionally jam or disable your attacker’s weapon at close range?

– Can you reflexively clear your own malfunctions, even if you only have one hand?

– Do you know how to fire your weapon from retention so that such malfunctions don’t occur?  When is the last time you practiced that skill?

– Do you know what to do if the attacker grabs your firearm in the fight?  Shooting him may not be possible if he induced a malfunction (like the one above) when he grabbed the gun.  What else can you do?

3) What do you do with the gun?  At some point in the struggle, the robber’s gun was either taken from him or was dropped.  When someone sees it laying on the ground, another person yells “Don’t touch it!”  Is that the correct response?

– Are there any reasons you WOULD want to control the robber’s gun?  How would you do it?  Standing at a chaotic shooting scene with a gun in your hand when police arrive may not be a good idea!  If you chose to control the attacker’s gun, how would you keep from getting shot by responding cops?

– Is there any time that you might want to use the attacker’s gun against him?  What would you do if during the struggle, the attacker pulled a second gun and began firing?  Would you use his dropped gun to shoot at him?

– Are you familiar enough with all commonly used weapons that you could clear a malfunction or reload the weapon for your own use if necessary?

– If you did secure the attacker’s gun, would you unload and clear it?  Why or why not?

4) Lethal force options are difficult in this type of tangle.  Look at the court security guards as they respond.  They are armed, but don’t draw their guns because they can’t get a shot.  What would you do if you were armed and you had to shoot the robber in this situation?  The best solution is to get close enough to make a contact shot.

– Are you comfortable moving closer to a dangerous suspect so that you can take a shot without endangering bystanders?

– Where would you shoot the attacker in this scenario?  If the bullet passes through his body, who would it hit?

– Is using a knife a better option than a gun in a situation like this? 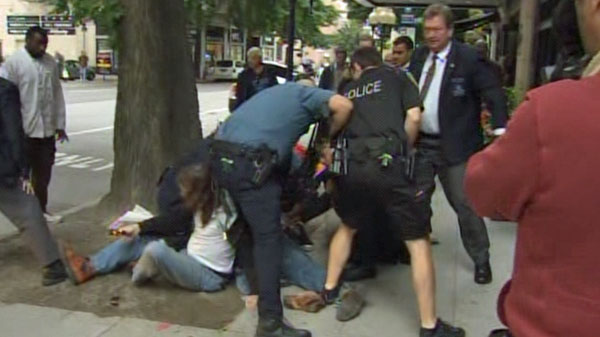 Could you take the shot in this screwed up tangle?

5) Eventually, the cops will come.  The police responded very quickly here.  Have you thought about what will happen when they get there?  Take note of what happened in the raw video.  The cop with the long gun initially went after the long-haired newspaper salesman (white t-shirt in the photo above), thinking he was the shooter.  Mistakes will be made in high stress situations like this.  It’s up to you to try to prevent them or to minimize the damage associated with those perceptual errors.

– What should you be doing when the cops arrive?  Is there anything you can do to ensure that they don’t mistake you for the shooter?

– Have you considered that the way you dress or look can affect the outcome of a situation like this?  When under stress, our brains use shortcuts to process information more quickly.  The cop with the long gun has likely arrested hundreds of long-haired homeless people dressed in ragged clothing.  His brain likely associated the appearance of the newspaper salesman with all of the criminals he’s arrested in the past.  He just assumed that the bedraggled newspaper salesman was the criminal until he was told otherwise by someone else.

It was a bad assumption, but it happens.  If you dress in ragged clothes, have a ragged beard, lots of tattoos, or other appearance feature that people would associate with some type of criminal element, you should really think about what you can do to make sure the arriving cops don’t think you are part of the problem.

– Is there a better way to handle the transition from citizen police to police restraint?  How could you maintain control of the bad guy as the transition takes place?

This is a situation that turned out pretty well, all things considered.  If you are an brave citizen willing to  intervene in a violent crime, you have my complete admiration and respect.  Please take the time to consider the points I’ve brought up so that you can stay safe when doing so.