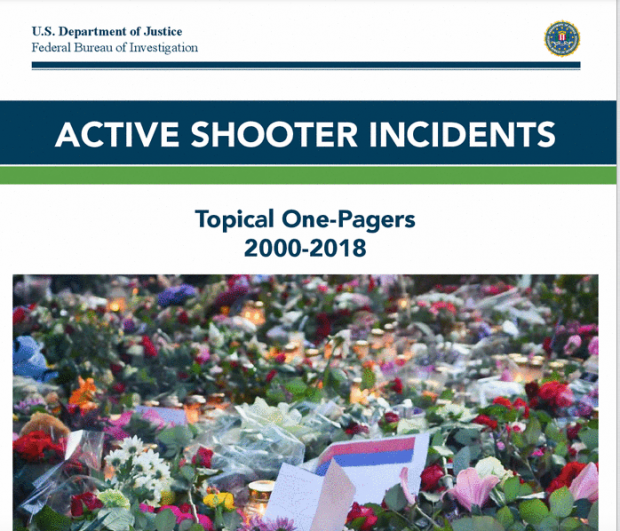 The US Department of Justice recently released a useful new publication titled Active Shooter Incidents: Topical One-Pagers 2000-2018.  The publication is an 18-page summary of active shooter statistics for every attack that met the FBI definition between the years 2000 and 2018.  It is a valuable reference for anyone who is interested in the topic.

I suggest that you read the entire document, but for those who won’t, I’ll provide some of the highlights.

The majority of casualties occurred in “Open Areas.”  That statistic is most useful for first responders.  While training in the topic of active killer response tactics is certainly lacking across the profession, many agencies are starting to incorporate active killer training scenarios.  Almost universally, those scenarios take place in a building.

Cops use large buildings like schools, churches, and vacant offices in which to conduct their training.  Very few cops get training on how to cross open ground under fire to approach an outdoor active killer site.  That needs to change.  Far more casualties occur outside than inside.

The average active killer event results in two people injured for every one person killed.  This has been true for as long as people have been keeping statistics about the topic.  The statistics remain the same for this subset of killings.  There were 2340 total active killer casualties during the 18-year time period.  Eight hundred and eighty-four of those casualties were fatalities while 1546 were non-fatal injuries.

Why is this important?  Injured people require more resources than dead people.  Those injured people need to be evacuated, triaged, treated, and transported.  Rarely in police/fire scenario training are there large numbers of role players to simulate the massive number of injured people in these types of scenarios.  Police and fire units should be spending more time coordinating their response in an effort to both stop the killer and quickly find and evacuate the victims.

Lots of cops embrace the role of being the guy who hunts down and slays the killer.  Fewer cops embrace a role where they are helping the injured.  Once the threat has been neutralized, the cops on the scene should be helping the medics.  Have your cops been trained how to assess patients and carry injured people to safety?  Most have minimal training on this skill set.

Out of 277 total incidents, only four involved multiple suspects.  Most events were perpetrated by a single killer who was arrested on scene by responding cops.   Police agencies who amass large groups of officers before entering are wasting time.  The chance of needing 360 degree coverage for multiple threats is almost non-existent.

It’s almost always going to be a single shooter.  One or two cops should be able to stop the threat if they are trained well and aggressive.  Don’t wait until you amass a group of four or five officers to enter.  That takes too long and probably isn’t necessary.  People are getting shot.  Make entry, even if it’s by yourself. 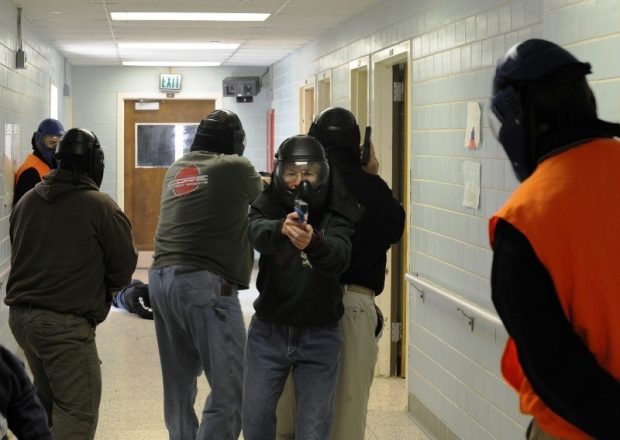 The “posse” approach to active killer response was all the rage in the early 2000s as these tactics were first developed. Now we know better.

Twelve of the 282 shooters were women.  Almost all of these killers chose  their own husbands or commercial businesses as targets.

Most active killers used handguns.  Although many of the killings with a high body count were perpetrated with semi-auto rifles, 2/3 of attackers used handguns, not AR-15s.

Thirty-Five percent of the killers carried more than one weapon.  Responders should not drop their guard if the killer appears to be disarmed of his primary weapon.  A lot of those killers are carrying multiple guns, knives, and bombs.  Don’t relax until the suspect is both handcuffed and thoroughly searched.

As a citizen who may physically respond to one of these events, don’t give up once you’ve stripped the killer of his visible weapon.  Keep control of the killer’s hands until cops arrive.  He very likely may attempt to access another weapon.

Most of the active killer attacks took place in commercial businesses.  We hear a lot about shootings at concerts, schools, and churches.  Those are comparatively rare.  Most of the attacks in the study were in businesses open to the public.  A lot of those attacks are perpetrated by employees and should better be considered “workplace violence” incidents rather than active killer events.

As I’ve written before, a growing trend is when killers go mobile.  Ten percent of all attacks involved more than one crime scene.  I would guess that if we focused on the subset of attacks from 2013-2018, that percentage would be much higher.

If you are interested in the topic, I’d highly advise that you look at the entire study.  There’s some good information contained within it.