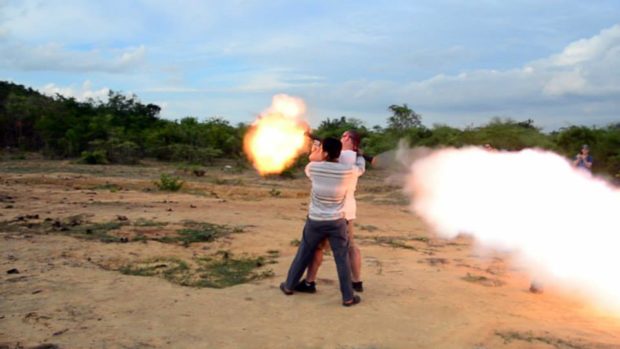 What follows is a travel experience that you won’t  find in your Lonely Planet Guidebook.  I don’t recommend anyone else try to do something this crazy.  While the outcome turned out to be positive for me and my friends, it may not turn out the same way for you.  Don’t attempt the things I’m going to describe!  You could end up hurt or dead.  Read at your own risk.  Now, on to the story….

I recently traveled through Vietnam, Cambodia, and Thailand with a fun bunch of new friends.  While drinking one night at a local Vietnamese bar, we spoke to some other travelers who mentioned that they heard it was possible to shoot RPGs and machine guns in Cambodia.  These folks tried to make it happen, but were unable to make the necessary arrangements.  My friends and I decided that we would try a little harder and make it happen.

As we traveled, we regularly inquired about how we might be able to fire an RPG.  Everyone said that if it were to happen, it would have to be in Phnom Penh, the capital city of Cambodia.  It seems that the capital city had a reputation for lax rules and endless opportunities…as long as one had the proper amount of money.

Some local guides we met offered to take us to a formal shooting range in Phnom Penh where we would be given instructions on how to shoot an AK-47.  It sounded fun, but we wanted something a little less structured and a little more exciting.

On our last day in the city, I was desperate to make this adventure happen.  I started asking random taxi drivers about shooting.  Very quickly a Tuk-Tuk (motorized three wheeled taxi) driver gave me the answer I was looking for.  He told me that he knew a person who could make  arrangements to shoot the big guns. 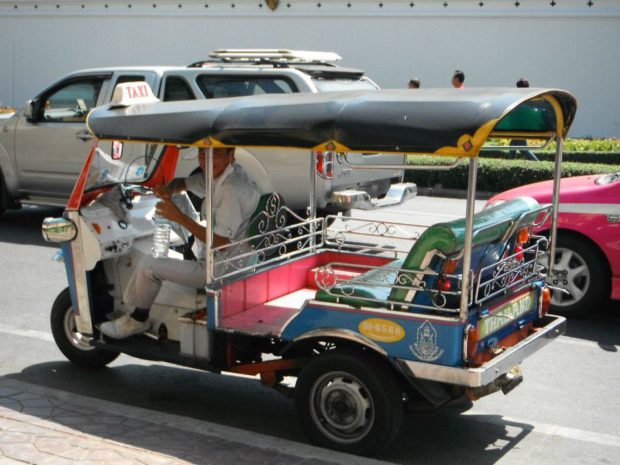 You might be asking: “What the hell is a Tuk-Tuk?” Here is a photo…

I was skeptical,  This dude was just a random tuk-tuk driver I met on the street.  But he spoke English fairly well and told me that he had taken several groups f tourists to do similar things in the past.  He pulled out his cell phone and said “I have an Army friend’s phone number right here.  I’ll call him and he will set it up for this afternoon.”

We still weren’t sure about the whole situation, but then the driver called his friend and asked us what we wanted to shoot.  The friend could provide Glocks, Thompsons, AK-47s, M-16s, sniper rifles, M-79 grenade launchers, a Russian K-57 belt fed machine gun and as many hand grenades as we wanted to throw.

He gave us prices.  They were expensive, but not outrageous for the opportunity to shoot something I’ll likely never see again.  I had a quick huddle with my friends and we decided to go do some shooting.

We recognized that we were taking a big risk.  We came up with a quick safety plan, distributed the weapons we had equally between us and took a couple other precautions.  There were five of us with four of the five having extensive military, police, or martial arts experience.  We knew it was risky, but we also realized that, as a group, we were fairly unlikely to be targeted.  Nothing ventured, nothing gained.  As one of my friends said: “This may be the dumbest thing I’ve ever done in my life, but it has all the components of an epic adventure.”  I grabbed my trauma medical kit and we rolled out!

Our tuk-tuk driver (called Lucky) explained what would happen.   He would drive us to the edge of the city where we would be met by another car provided by his army friend.  We would then take that car about two hours out of town to a military bombing range where the guns would be waiting.

Things proceeded as planned.  We met a taxi on the outskirts of town.   All of us (including the tuk-tuk driver) piled into the Toyota Camry taxi for a 90 minute ride.  We pulled over again and met another car…this one containing our army contact and a driver.

We split the group with half staying with the original taxi driver and the rest of us riding with the army guy (who never gave us his name).  Army guy explained in broken English that he had retired from the Cambodian military in 2004 as a RPG gunner.  He even showed us a photo of him with his RPGs “back in the day.”  He also showed us a written menu of the services he provided….RPGs, hand grenades, machine guns, and beer.  It was going to be a good day! 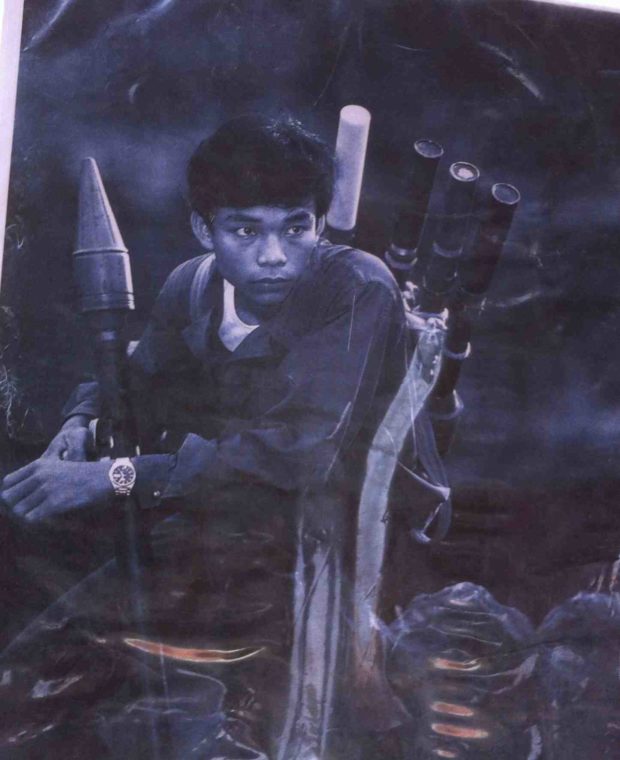 A photo of ‘Army Guy” in his RPG shooting days

Army guy then asked if we wanted to purchase “targets”.  For $300 he would bring a cow to the range to serve as the RPG target!  As cool as the video of blowing up a cow with a grenade would be, I had to pass.  It seemed pretty cruel.  I also passed on his offer to bring chickens (at $5 each) to serve as machine gun targets.  This place truly was a bit insane. 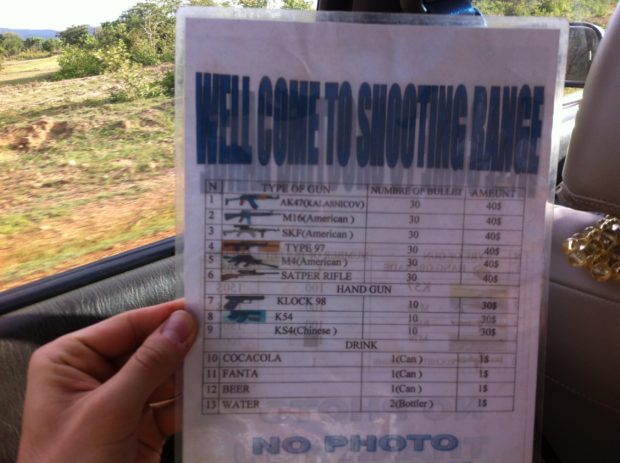 The menu of services offered…

After about 30 more minutes of travel, we pulled off onto a dirt road near the mountains.  There was a military guard shack.  I never saw the guard, but the chain blocking the road was lowered and we drove past.  As we entered, our guide explained that he “bought” all of the weapons from the Cambodian military and that all of our activities would be completely legal. 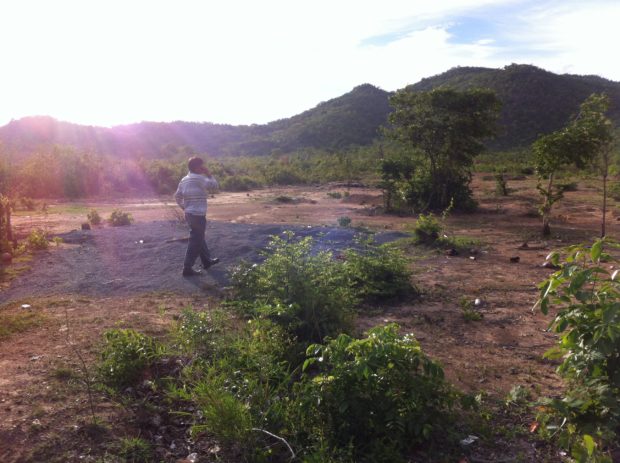 The bombing range and “Army Guy” calling for the guns

We pulled up in a field littered with empty shell casings and explosive remains.  Army guy got on his cell phone.  Five minutes later, two guys drove up on a scooter that also had machine guns and an RPG tied to the seat. 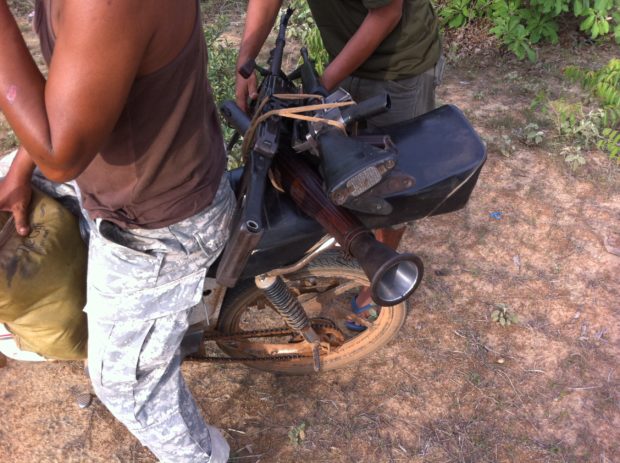 The guns arrive on the back of a scooter. What could possibly go wrong here?

The guys on the scooter removed the weapons and began assembling things…preparing grenades, loading magazines, and linking belts of ammunition.  They brought two RPGs, several hand grenades, a belt fed machine gun, an M-79 grenade launcher with high explosive grenades, an AK-47, and an M-16A-1 (the was stamped “Property of US Government”). 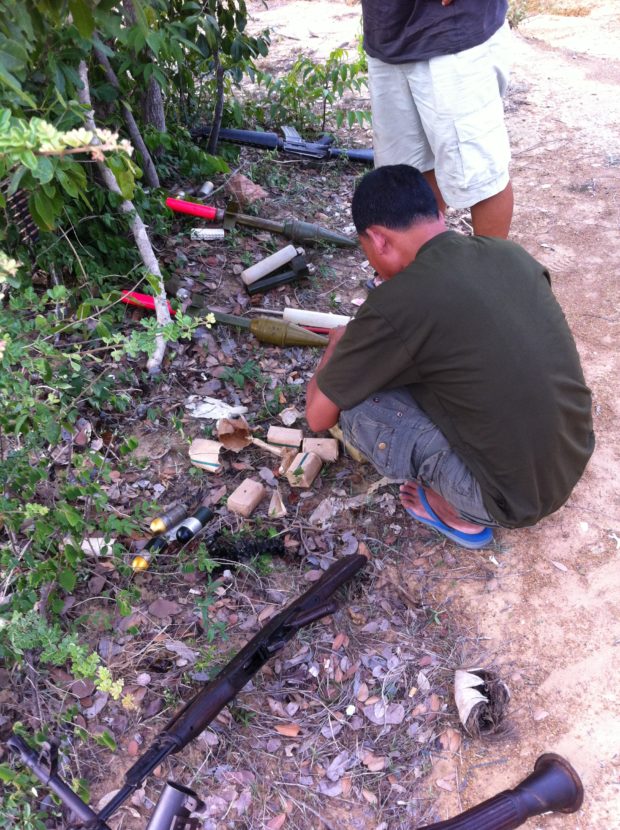 Getting the guns and rockets ready 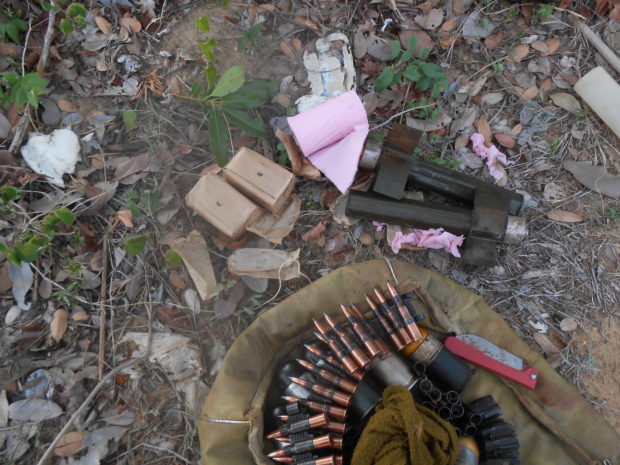 They thought of everything…the pink toilet paper was our ear protection.

I was up first with the RPG.  There was no safety briefing.  Army guy showed me how to remove the two safeties and gave me a 3-2-1 countdown.  I knew that RPGs could explode in the tube and I didn’t have a whole lot of confidence in my instructor’s abilities, but I threw caution to the wind and squeezed the trigger when the countdown reached “0ne”.  I was rewarded with a massive blast and saw the grenade flying toward the hillside where I had aimed.  Success!  It was even better when the grenade exploded several seconds later. 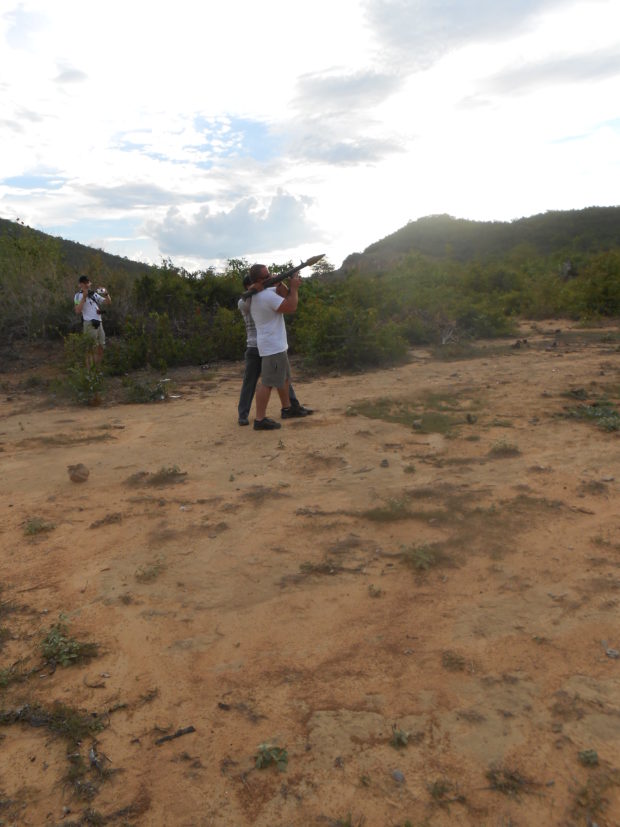 Preparing to fire the RPG

I was amazed by the total lack of recoil and by the huge backblast.  I didn’t feel much when I shot it, but the photos show a different story!  I’m glad no one was standing behind me! 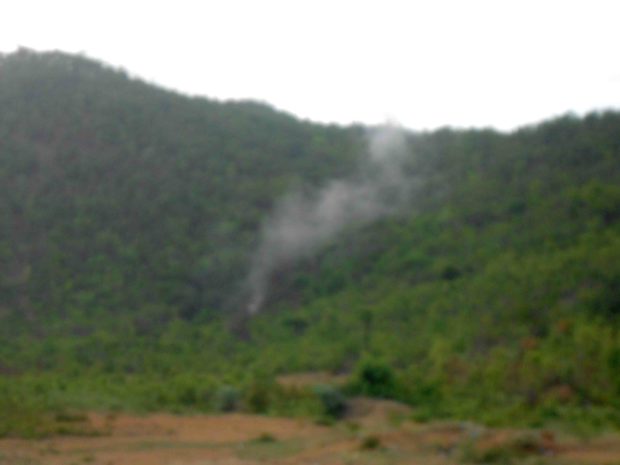 One more of my friends shot the RPG and then it was time to play with hand grenades.  Only one of my companions wanted to throw a grenade, so he walked forward to a protective berm on the range.  After a few practice throws (with rocks) that involved diving behind the dirt berm after the throw (and some instructions from me about how to hold the grenade so his fingers wouldn’t slip off the spoon), my friend pulled the pin and tossed the grenade.  Nothing happened.  It was a dud.  They just left it laying on the ground where it fell.  I can’t imagine how much unexploded ordinance is laying around that bombing range. 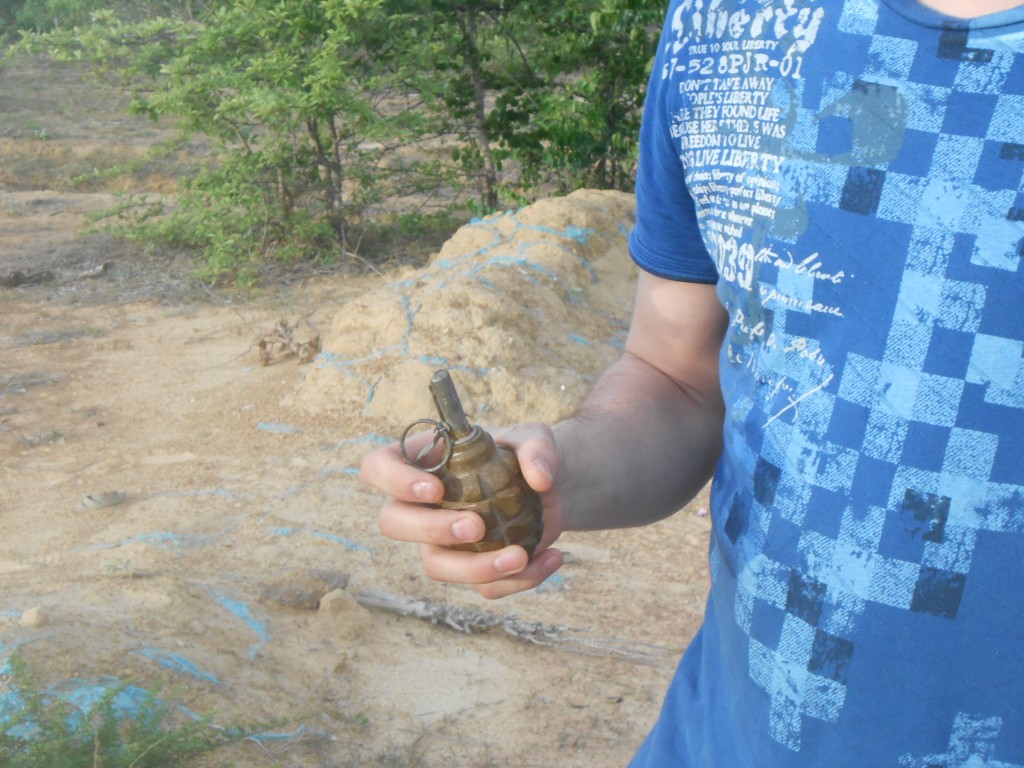 I hate to think how old this grenade was…

Then it was on to the belt-fed K-57 Russian machine gun.  It was a light machine gun similar in style to the M-60.  It wasn’t well cared for and jammed quite regularly. The ammo we were firing reminded me of the old Norinco 7.62 x 39mm ammo that was imported from China in the early 1990s before President Clinton banned Chinese arms imports.  It had no headstamp markings and was made of very soft brass with no lacquer coating. 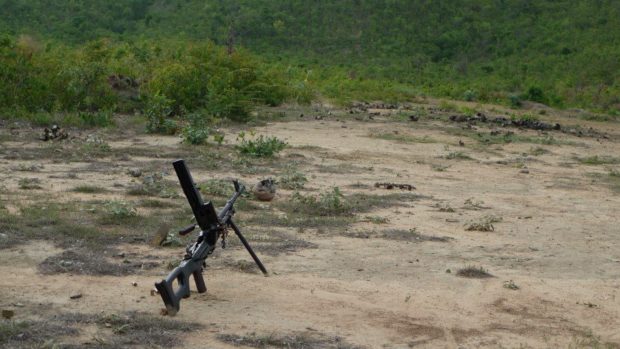 Army guy had problems clearing the malfunction on one occasion.  I stepped up to help and quickly found the culprit…casehead separation.  Half of the empty case was stuck in the barrel and our guide was trying to chamber a round behind it!  I warned my friend that the gun wasn’t safe to shoot and we moved on to the M-79 grenade launcher. 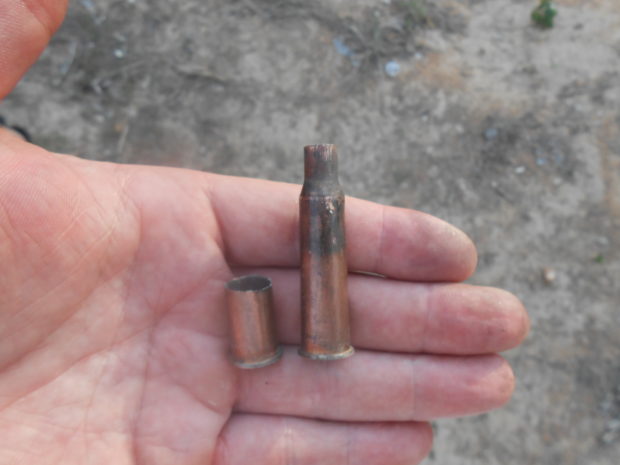 The M-79 was much more impressive than I expected. I have shot 37 mm and 40 mm grenades in various police classes, but they have always been gas or impact munitions, not high explosives. The HE grenades were almost as impressive as the RPG. If it wouldn’t anger the boys at the ATF, I’d certainly try to acquire a few of those things! 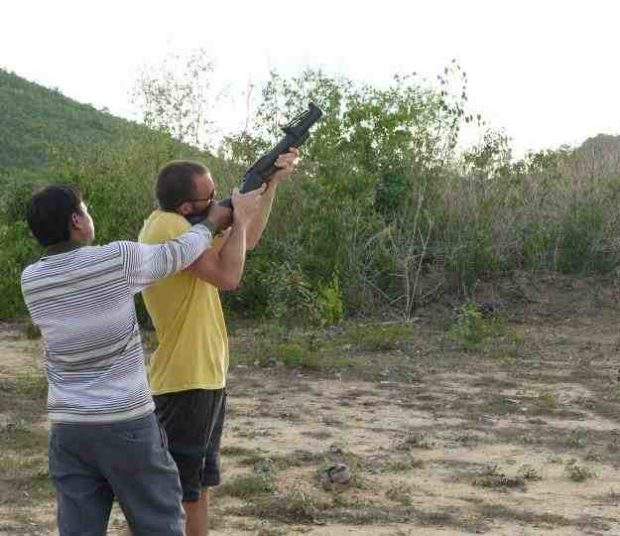 A friend shooting the grenade launcher

We finished up by firing both a full auto AK-47 and M-16A1. The target was a small red flag flying in a tree about 100 meters away. I was actually surprised that both guns functioned given their poor condition. “Army Guy” demonstrated a very unique method of lubricating the guns prior to shooting. He squirted liquid oil down inside the fully-loaded magazines!

What a horrible idea! The cartridges don’t need lubrication, the moving parts of the gun do! Besides that, oil in the magazine can penetrate cartridges and deactivate the primers.  It will also attract massive amounts of dirt and grit. Don’t do that! There’s a reason why Cambodia isn’t a military super power. 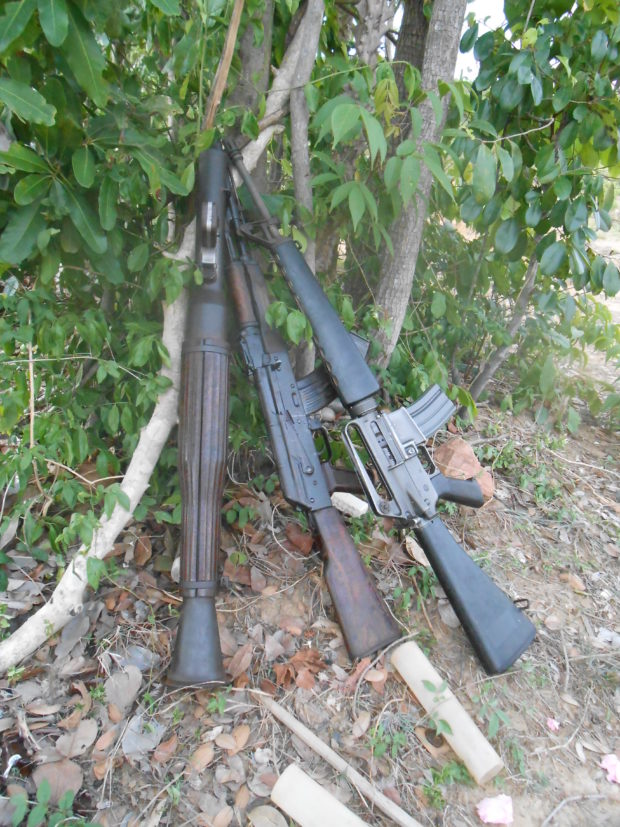 After our shooting adventure we shared a beer with Army Guy and headed back home…glad to be alive!

It was quite a day’s adventure for me and my friends and it made for a great story, but I can’t help but point out a worrisome aspect of the whole ordeal…

If a dude like me (with no military contacts) is able to get his hands on RPGs  and fully automatic weapons JUST BY TALKING TO A TAXI DRIVER, how tough do you think it is for criminals or terrorists to acquire these weapons and bring them into the USA? To assume that our enemies don’t have these weapons would be a grievous error. I think it’s only a matter of time before we have a terrorist attack involving this kind of heavy weaponry on US soil. It’s a sobering thought…and a situation for which US law enforcement is completely unprepared. 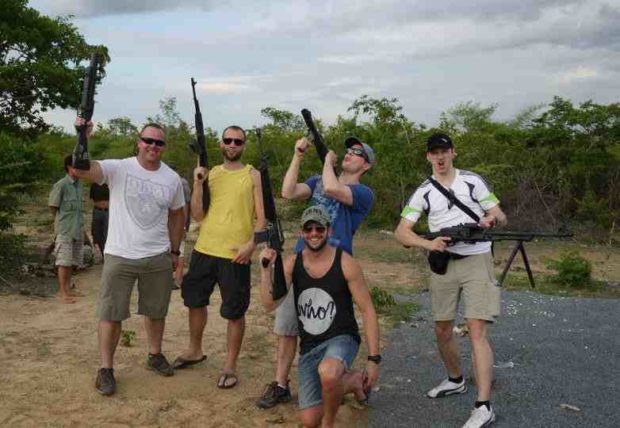 Posing with our toys at the end of the shooting session…

If you want to read more about third-world adventure travel, please check out my book Choose Adventure.