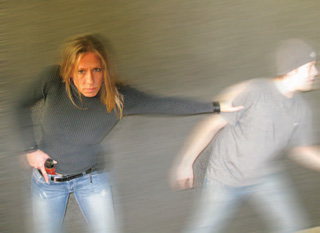 Recently in my city, a man carrying his infant child in a car seat was accosted by an armed robber.  The robber demanded the victim’s wallet.  The victim set the car seat on the ground and knelt in front of it to protect his baby as he complied with the robber’s demands.

The robber grabbed the wallet and started running away.  The victim, a CCW licensee, took that opportunity to draw his pistol in case the robber returned.  As the robber ran away, he turned and pointed the gun at his former victim.  The CCW licensee fired one shot, hitting the robber.

The victim here turned the tables on his attacker, and in doing so, protected his infant from harm…or did he?

It got me thinking about how parents instinctively try to shield their children from violence.  It may not be a bad response at times, but on other occasions, it could be deadly.

If the robber in the scenario I described above fired back, where do you think his bullet would go?  If he’s firing at the victim, and the victim is shielding a child, then the bullets are going to be coming close to the child he is trying to protect.  That’s not a good thing.  However hard it may be, I think the safer thing for the victim to have done was to get some distance between himself and his child.  How many parents have thought about that tactic?

Being around unarmed friends and family members is a part of life for most of us who regularly carry a gun.  Have you ever given any advice to your friends, children, or spouse about what to do if you are attacked?  Each person’s advice is likely to be different, but here are some things to think about…

I have instructed my family and friends that, should we be attacked, they are to remain quiet and do exactly what I tell them to do. My goal will be to get them to safety before I engage, if possible. If things happen too quickly for me to tell them what to do, I have instructed them to get as far away from me as possible once I draw my weapon.

Teach your family about cover (which materials protect them from bullets and which won’t). Should you have to draw your gun, instruct your friends and family to get away from you, get to cover, and call the police. Train them to give a description of you (gender/age/clothing) to police and tell them that you are a CCW permit holder. You don’t want to be mistakenly shot by responding officers. 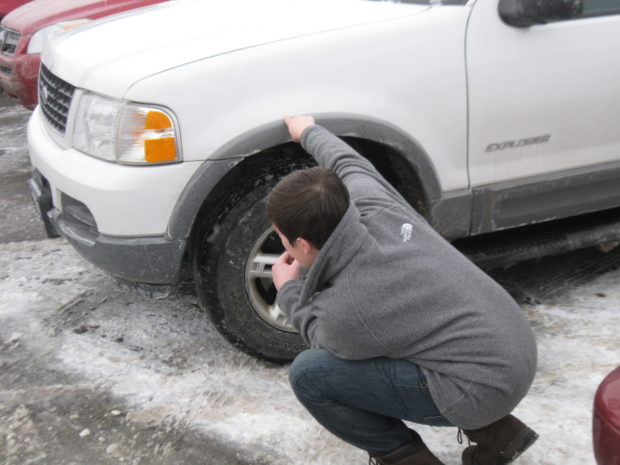 The best available cover on a vehicle is the engine block or wheel.  Arm’s length distance from the cover provides the best protection.

Your companions also need to know not to leave their cover to approach your body if you are shot. For all they know, you could be playing dead in order to distract the attacker or get him to focus on something else. Having a family member leave cover to run up to your seemingly lifeless body will unnecessarily expose them to danger. It may be tough for your family to ignore the fact that you may be severely injured, but the most important thing they can do is to stay safe so that you do not have to worry about them as well.

Teaching these concepts to young children can be especially challenging. Younger children have problems obeying orders under the best conditions, let alone when they are panicked at the thought of their parents being killed.

I would suggest that you start working with your children early. First, teach them about awareness. A friend of mine plays a game called I spy with his two young children. You’ve probably played the game yourself when you were younger. One person starts out by saying “I spy …” and gives a hint like, “something blue.” The other person has to guess what the original “spy” is looking at.

My friend modifies the game with his young kids so that only people (rather than objects) can be “spied.” He plays the game with them in public areas when his attention might be diverted to other tasks (like loading the groceries into the car or placing his youngest daughter in a car seat). In effect, he gets his children to be more aware of their surroundings and to serve as an extra set of eyes as he is busy completing his tasks. If his kids say, “I spy a man with a gun,” he knows he has to act.

Additionally, I would suggest that you develop a code word with your children. I like using the code word “emergency.” Train your kids that when mommy or daddy says the code word, nothing less than unquestioned obedience should follow. No fussing, arguing, or hesitation is allowed.

Practice some drills in public places using the code word and reward your children when they get it right. Practice by selectively yelling phrases like: “Emergency! Run to the car” or “Emergency! Get out of the house!” to get them in the habit of following orders immediately.

You don’t have to go into gory detail with your children about what you are doing. Keep your explanations simple and non frightening. Children are used to fire drills and tornado drills at school and aren’t frightened by those. Place your training into the context of being just like the fire drill at school. You could even describe it as being similar to a game of Simon Says if you fear that other descriptions might frighten your child.

Parents have an almost instinctive desire to shield their children from violence, both figuratively and literally. In the physical sense, this shielding process may unintentionally place your children in additional danger. Have you thought about what you would do if you were with a young child in a retail store that was being robbed?

If you have, I presume that you wouldn’t draw your weapon and risk putting your child in the middle of a shootout unless you believed someone was likely to be killed. That’s good thinking. But I want you to take it one step further. How exactly would you position yourself in the store in relation to both the robber and your child? If you are like most parents, I bet you would place your child behind you so that your body could serve as a shield between the child and the robber. That may not be the best course of action.  Think about the robbery scenario at the start of the article…

As a test, I structured a training scenario in a class that I once taught at the Tactical Defense Institute (www.TDIOHIO.com). The class was called F.I.S.T. Final Intensive Scenario Training. The class is only open to students who have graduated all six levels of TDI’s handgun training program. It is a weekend of scenario training where students can test their skills under the stress of interacting with live role-playing actors. Both the bad guys and the students guns that fire special paint marking cartridges. All of the students in the class were very well trained and competent, both as shooters and tacticians. Most had graduated from numerous additional shooting schools besides TDI.

In the scenario I conducted, the students were thrust into the middle of a convenience store robbery. There were two armed robbers and multiple innocent shoppers in a relatively small area. The students also had an actor (a 10-year-old boy) playing the role of their child with them. The robbery goes down as the student and their child are browsing the items on a shelf.

The robbers drew guns and ordered the crowd to put their hands up. As soon as they saw compliance, one robber went for the store’s money while the other watched for resistance from the shoppers.

To make matters interesting, the student’s child begins screaming, “Daddy, you have a gun! Shoot him, Shoot him!” That unexpected action challenged the students immensely. In real life, that sort of thing would likely get the student killed. 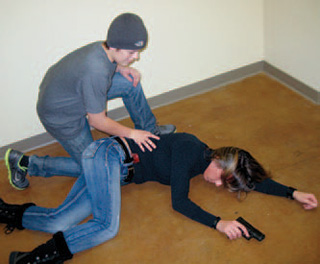 If you are hit, tell your child not to approach your body. You could be playing dead, drawing fire away from him, or setting an ambush

After shielding their child, some of the students drew their weapons and engaged the robbers. Bad move. Getting into a gunfight when your child is with you should be your absolute last option. Don’t draw your gun unless you or someone you care about is likely to be killed. Protecting the store’s money or apprehending a robber isn’t worth your child’s life.

If you do decide to draw your gun because you think you will be killed otherwise, do you really think it’s a good idea to have your child behind you? Where do you think the bad guy’s bullets are going to end up? When you enter a gunfight, you should expect that the gunman will shoot back. With bullets flying all around you, your child is safer almost anywhere but near your body. The act of protecting and shielding that works so well in a physical altercation may be potentially fatal for your children if gunplay is involved. Get your kids away from you if you draw your gun.

Say the word, Emergency and order them to run out of the store. Even ordering them to duck behind a counter or to get down on the floor would be preferable to having them stand beside or behind you. 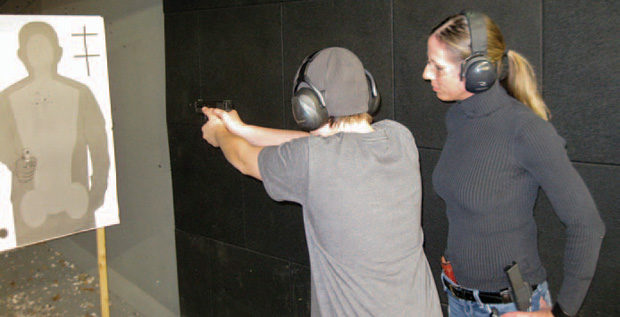 Training your child how to use your gun (when he is mature enough) may give him the skills to save both of your lives.

Be prepared for your children to freeze under the effects of stress. If they don’t do as you’ve instructed, it’s your job to move the firefight away from them. That’s where all the practice you’ve done shooting while moving will really pay off!

If you carry a firearm, take the time to discuss response options with friends and family. Teach them that when you draw your gun, they must immediately follow your instructions. Tell your children and any other family members that if you don’t tell them what to do, their job should be to get as far away from you as possible, seek cover, and call the police. Do drills similar to the emergency word discussed above with a training weapon in a private location.

It’s a simple plan. “When my gun comes out, or I say the word “emergency”, you do exactly what I say. If I don’t tell you what to do, get as far away from me as possible.”  This type of pre-planning may save your life and prevent a potential tragedy.