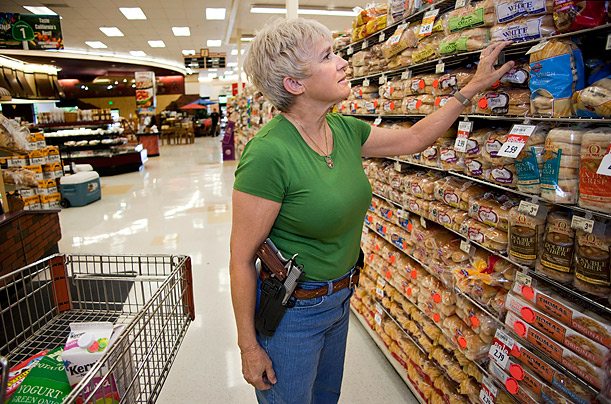 As of today, every state in the USA has some type of provision to allow citizens obtain a permit to carry a concealed handgun while engaged in lawful activity.  In some states, that permit is easy to get.  In others (like California or Hawaii) it is almost impossible unless you are politically connected.

What many people don’t know is that the UNCONCEALED (or open) carry of firearms is not legally regulated in many states.  Here in Ohio, it is completely legal for anyone over the age of 21 (without a history of mental illness, drug addiction, or felony conviction) to carry a firearm in public.  No permit is needed as long as the gun is not concealed.

Did you know this was legal activity?

It’s rare, but occasionally you will see someone carrying openly.  Most do it as a political statement.  They are trying to raise awareness for better concealed carry laws and promote the idea that guns can and should be safely carried by anyone who wants to.  I applaud the gun rights activism.  I think people should recognize that guns are not necessarily bad and get used to “normal” people carrying them.

This article got me contemplating the issue.  I’ve come to the conclusion that open carry just isn’t a very good idea most of the time.  It seems especially bad in this time of pandemic when people are already acting irrationally.

First of all, if you live in a state where open carry is legal, I am not trying to limit your rights to carry a gun.  Go for it if you want.  I’d just ask you to put some thought about risks versus benefits before you openly carry your gun into WalMart.  I know a lot about  carrying  guns.  Hopefully my arguments will make you think twice about carrying openly.

Open carry can lead to numerous problems.  As a cop responding to calls about this activity and as a citizen who carries a concealed handgun everywhere, I have unique insight into the problem.  Here are some of the issues:

1) Open carry will cause hassles with other people and eventually the police.  Unless you live in rural area or a western state, open carry isn’t very common.  When the uneducated populace sees someone carrying a gun (without a badge), they assume that a law is being broken.  They panic and call the cops.  What they tell the dispatcher when they call generally has no basis in truth.  It usually ends up being something like:

“There’s a man with a gun running around the grocery store scaring people!”

If you were a cop, how would you respond to that call?

Things would turn out differently if the caller would have been honest and said:

“There’s a person walking around the grocery store who has a gun on his hip.  He isn’t threatening anyone and appears to be shopping.”

As a cop, I wouldn’t even approach you.  I’d educate the caller that no laws were being broken and leave.

But that’s just not how it happens in real life.  Blame it on whomever you like, but reality dictates you’ll get a police response.  The police response may be positive, or it may be negative.  Who wants to deal with that when you can simply cover your gun?

2) Criminals may not be deterred by openly carried guns.  For an obvious example of this, look at the article linked above.  For more than 60 additional examples, read my article Friends Don’t Let Friends Open Carry.

The guy in the linked article just waited for the gun carrier to look the other direction and he attacked, trying to rip the gun out of the holster.  Any serious violent criminal who has been in the game for awhile knows how to check the crowd before he commits the crime.  He’s looking for witnesses, cops, security guards, and anyone who will likely intervene.  If he finds one of those people, he deals with them FIRST, then he goes on to commit the crime.

The armed robber (who has his gun concealed) could just shoot you in the back of the head before moving on to take the cash.  Or he might do worse.  What if he takes your child hostage and orders you to give up your gun?  Most people don’t think about that possibility. 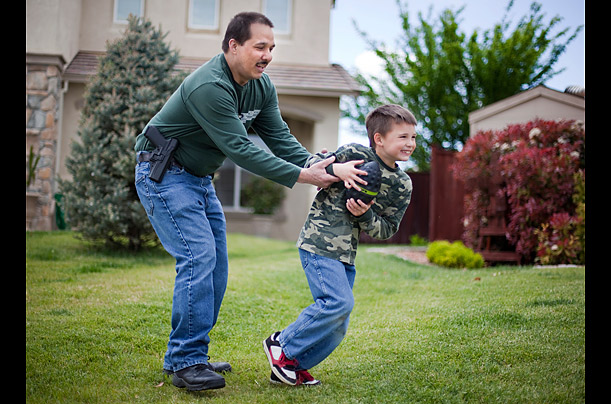 A criminal looks at this scene differently. He thinks, “If I snatch the kid, Dad will give up the gun.” And most of the time, the criminal is right.

Keep your cards hidden.  That gives you multiple response options.  Once the armed criminals know you are packing, you’ll be the first one shot.

3) Getting your gun taken away is always possible.  Most people who carry guns tell me:

“I never let a criminal get within 10 feet of me.  I’m constantly aware of my surroundings.”

It’s bullshit.  They are deluding themselves.  It’s physically impossible for one human to simultaneously scan 360 degrees at the same time.  You always have to turn your back to something.   Especially in a crowded public area, you simply can’t process all of the information fast enough to decide who is a threat and who isn’t.

Historically (since the 1960s when such statistics were first gathered) about 10 percent of the cops who are killed (by gunfire) in the line of duty are killed with their own firearms.  Cops are trained to be alert, they often work with partners, and they have the best retention holsters available.  Yet they still get their guns taken from them.  You think you can do better because you took a one-day CCW course?  Understand reality.  You can’t see everything and you can’t win every fight.  Your gun can be taken and used against you.

4) Most people who carry guns have crappy holsters and no weapon retention skills.  I teach force-on-force fighting skills to cops and citizens.  In those courses, I teach my students what to do if someone grabs their holstered gun.  Even after multiple days of training, the students still have trouble retaining their firearm in a surprise attack.  Most pistol packers don’t even have the benefit of this kind of training.

Think about this for a second.  You are open carrying a gun on your right hip.  I walk up to you and engage you in casual conversation.  I say something like:

“Hey!  Don’t our kids go to the same school together?”

As you are trying to figure out who I am, I move closer and extend my hand to shake.  When you reciprocate the gesture, I grab your right hand with my right hand and pin it to my chest.  You struggle, but because I’m stronger, you can’t free yourself.  As soon as I have the arm controlled, I grab your holstered pistol with my left hand.  How are you going to stop that?

I’ve done that scenario on dozens of students.  It almost always works.  I end up with their gun and they have a puzzled look on their face.

It’s even easier to do when you are wearing a crappy holster.  That “great deal” you found at the gun show will rip right off your pants if I yank on it.  Trust me.  I have some trophies from my force-on-force training sessions.  In most classes, I destroy a Fobus or Uncle Mike’s holster with one pull.  Those holsters are trash.  If you don’t believe me watch THIS VIDEO. 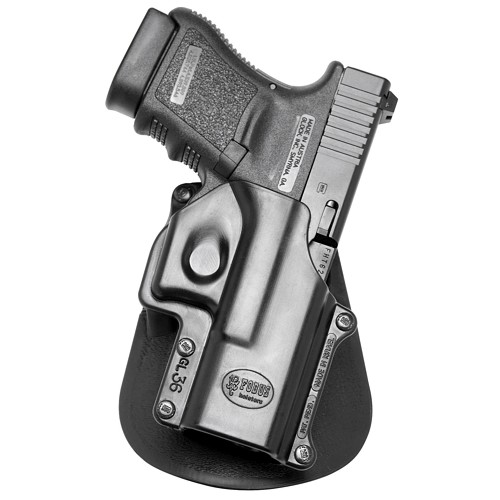 If your defensive holster looks like this, you are going to have a big surprise if you have to fight over your gun.

Just because you can carry openly doesn’t mean you should.  Your carry method may be legal, but it may also cost you your life.

Think deeply about the potential consequences before you open carry your pistol.