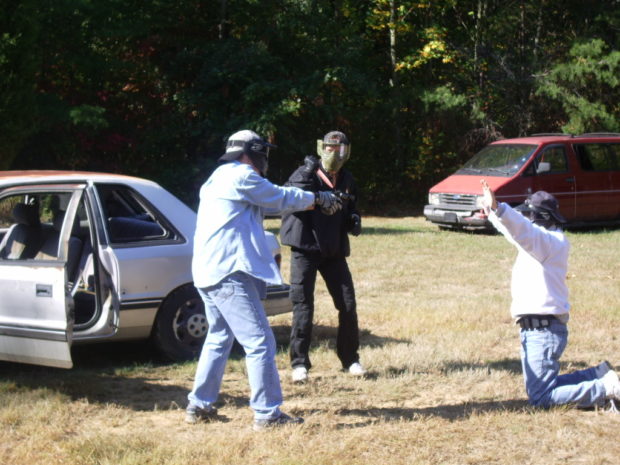 Whenever anyone says “I could never shoot another person,” I know that one of two possible thoughts are going through his or her head….

1) They value the life of a random criminal attacker more than their own life.

2) They are living in denial and have not contemplated the idea that hideous acts can happen to “regular” people like themselves.  Either they have lived a very sheltered and pampered life and merely never encountered depravity, or they find the idea of a criminal attack so repulsive that they try to avoid thinking about it.

The second option is relatively easy to deal with by rationally explaining how criminal attacks happen and what happens to the victim.  I find real-life stories about peoples’ actual experiences are more useful than theoretical scenarios for changing attitudes.  With enough reinforcement, you’ll change the opinion of a person who just doesn’t have enough knowledge to make a good decision.

It is the first thought process, a lack of self worth, that is particularly difficult to alter.  In the short period of time I’m with my students, I can’t possibly fix deep-seated psychological problems.  I’ve found the best course of action to take is to remind the person about all of the other people who love, care about, and depend upon him or her.  Saying something like: “Imagine how difficult it would be for your young child to grow up without you if you were killed” may provide the person with enough motivation that he can see the value in self defense.

Once my students leap over the hurdles of recognizing that their lives are worth defending, the physical skills are relatively easy.  We see a passion develop, especially for people who take firearms training.  Our students generally like guns; and once they get a taste of professional firearms training, they want more.  Many students go from not owning a gun to carrying a gun during every waking moment and taking multiple firearms training classes every year.  They feel empowered and want to keep that feeling by learning more and more about the ways they can protect themselves and their families.

It is at this stage that I start noticing a problem…

The students train with their firearms so much and think about their responses to attack scenarios so often that they are unable to recognize when it might be a better option to keep their gun holstered in the face of a criminal attack.  They go to their guns as a default response to any lethal force threat.  In general, that’s a great plan; but there are times  that call for a more modulated response.  Immediate violent resistance usually works to repel any criminal attack.  There are scenarios, however, where immediate violent resistance is more likely to get you killed.

Take a look at this article… 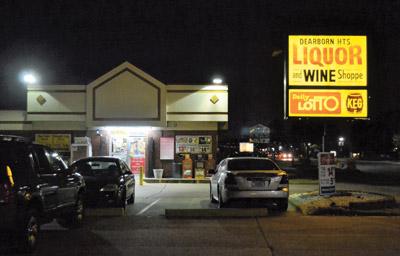 In this case, a customer caught up in a liquor store robbery failed to follow the armed robber’s instructions.   He resisted, albeit verbally.   He was shot for his defiance.

I see similar things happening to my students in advanced force-on-force scenarios.  Bad guy confronts the student with a gun.  Student draws own gun in response.  Student gets shot.  The scenario plays out in a similar form over and over again.  I don’t care if you are the best shooter in the world.  You can’t outdraw a trigger press.

Have you ever really thought about the reaction times involved in a situation like this?  If you are a well-trained person. you may be able to draw your pistol from concealment and fire in approximately 1.5 seconds.  Take a shot timer to the range someday and aim your pistol at a target.  When the timer sounds, fire as many rounds as you can in 1.5 seconds.  Depending on your gun and your abilities, you will probably be able to fire between six and ten shots in that time period.

Do you see the problem?  When the bad guy has his gun pointed at you, he will be able to fire 6-10 rounds before you are able to shoot once.  Those aren’t good odds!  Outdrawing a drawn gun is a loser’s bet. 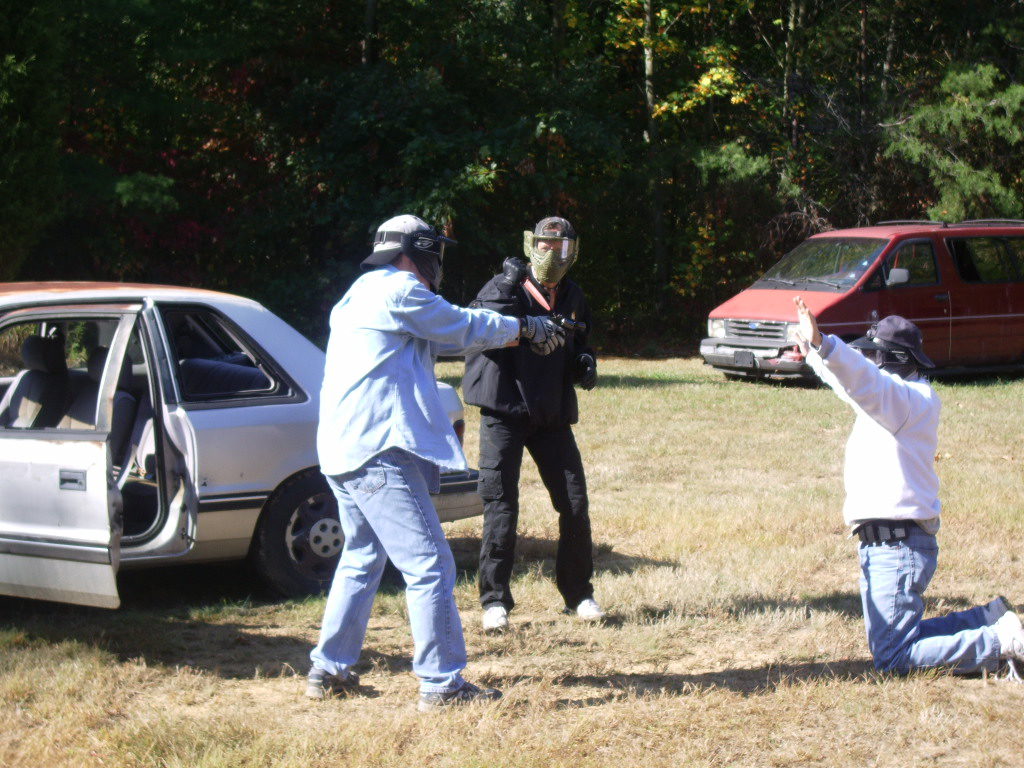 Multiple assailant carjacking scenario at TDI. This is a bad time to make a move for your gun! 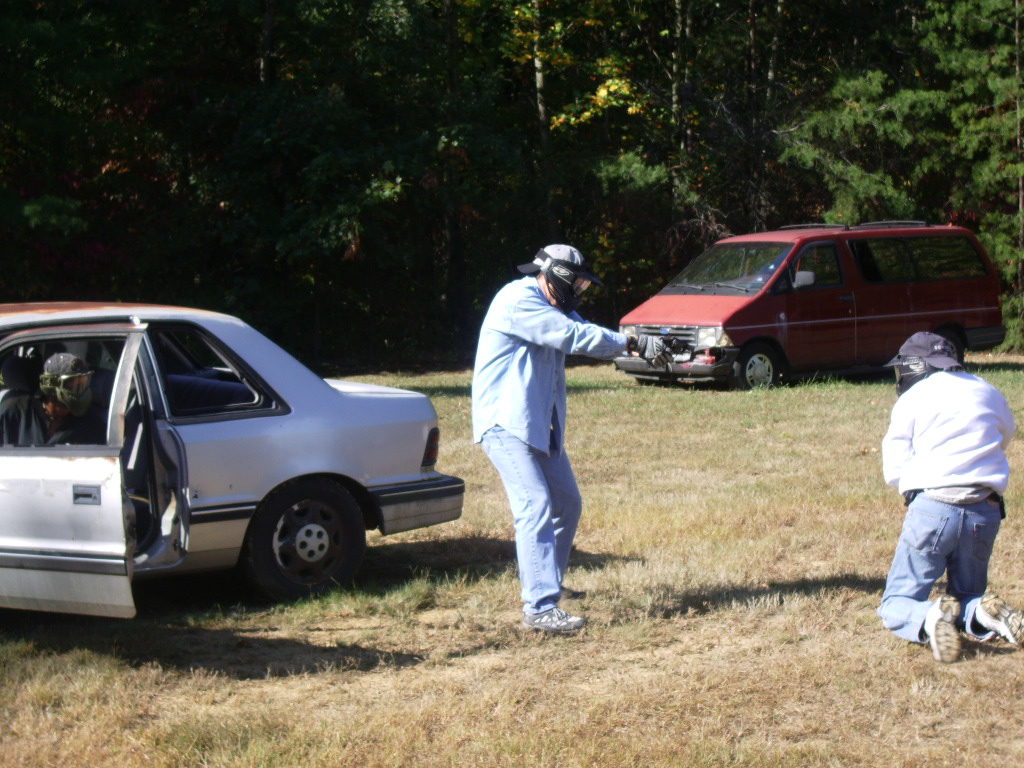 BUT…student attempts to draw anyway. He is getting shot with a Code Eagle paint round. It’s a painful lesson!

Here’s what I suggest…

Instead of immediately drawing your weapon when the bad guy has his gun pointed at you, feign compliance.  You can still resist whenever you want to, but YOU get to pick the time that is most favorable for a successful outcome.  If the criminal isn’t immediately shooting, you are likely to have some time.  If he had wanted to shoot, he would have done so already.  If he hasn’t, that generally means he won’t shoot unless you do something to provoke him or impede his escape.

Play it cool and wait for a better opportunity to act.  The criminal can’t hold his attention on you and commit his crime at the same time.  In almost every instance he will be distracted at some point in the process.  The time to act is when he isn’t paying attention to you.  You will likely be much more successful.

As you feign compliance, try to do a couple things:

1) Look around in a casual manner and see if the criminal has any likely accomplices.  It would be bad form to act after waiting for the primary bad guy’s attention to be diverted only to be shot in the back by his unseen buddy.

2) Try to slowly work your way closer to a piece of cover.  When you make the choice to resist, being a couple steps closer to something that stops a bullet may be the difference between life and death.

3) Separate yourself from family or loved ones.  If you start shooting, the bad guy will shoot back in your direction.  The safest place for your loved ones to be is as far away from you as possible.

There are some scenarios where you should act immediately regardless of the risk to you.  Don’t wait for a “better” opportunity when:

– The criminal is trying to force you into a car or take you to another location.

– The criminal is trying to search or restrain you.

– You think the criminal is going to immediately pull the trigger.

In each of the above scenarios, your chance of surviving is very low.  You are likely to be seriously hurt or killed, so there is nothing to lose by acting immediately.  You may get shot while drawing your gun, but your return fire might disable the shooter or drive him off before he kills you.

You are presumably carrying a gun so that you can avoid being killed by a criminal.  Be smart!  Trying to outdraw a trigger press will not help you accomplish your goal of surviving.  If you can do it, buy some time and wait for a better opportunity to shoot.  My students who have done that have fared much better over the years than those who have immediately gone for their guns.