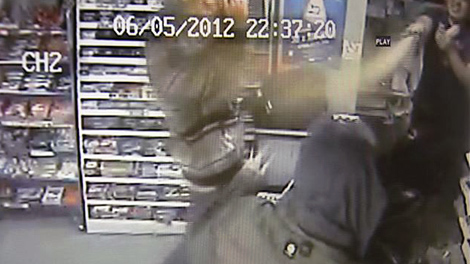 Watch the excellent surveillance video of a store owner and his wife fighting two robbers armed with knives. The store owner is able to access a large can of pepper spray and blast his attackers. He then holds one attacker down on his counter while his wife kicks the dude in the face. Nicely done! 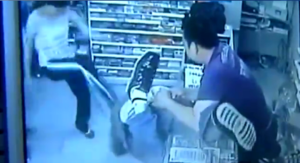 The kick to the face!

I’m glad the shopkeeper was able to prevent the robbery and capture the criminals, but when we really analyze his actions, there is only one conclusion to make…he got lucky. Let’s look at what he could have done to make his resistance options a little safer and more likely to be successful….

1) Keep your spray accessible- The shopkeeper here had to waste valuable time trying to get the spray from behind other objects on a cluttered shelf.  If his attackers were more violent, they would have likely killed him.

Women carrying pepper spray are the worst culprits when it comes to having sprays inaccessible.  I see countless women carrying sprays buried in their purses or in keychain sheaths that are virtually unusable.  If you want to use your pepper spray, it has to be ready!

2) Practice with your spray.  The shopkeeper had problems removing the safety clip, and it looked he took a bit of the initial blast in his own face. If the robber were a little more aggressive, things would have likely turned out differently.  Most spray manufacturers market inert training sprays of the same size and spray patterns as the “real” units.  It would be worth your efforts to buy a few inert canisters and get some good practice before you rely on your spray to save your life. 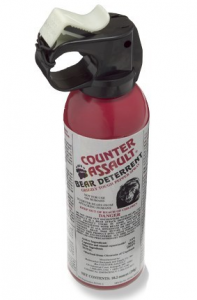 The type of spray used in this case. Do you see the safety clip that must be removed?

3) Have a backup plan.  Note the response from the people sprayed. One stopped immediately and fled. The other continued to fight for a couple of seconds before he was blinded. Sometimes the stuff works quickly and sometimes it takes awhile. Have another plan in case your spray doesn’t work!

I’ve sprayed some people who were instantly affected.  Others take 20-30 seconds to stop fighting.  I had one guy who fought for eight minutes after being sprayed!  The results are simply unpredictable.  Always be ready to implement an alternate plan in case your attacker isn’t incapacitated.

4) Know how you will react to the spray.  The store owner here shot himself in the face with his own spray.  He was able to continue fighting.  Some people won’t be able to do that.  Every time I’ve sprayed someone with pepper spray on the street, I’ve been exposed to it myself on some level.  It’s painful.  It makes you cough and your eyes burn.  But most of you can fight through the pain as long as you know what to expect.

You don’t want your first exposure to be on the street while you are fighting a criminal.  If you don’t want to take a full spray to the face, spray some OC onto a gauze pad and wipe the corner of your eye with it.  You’ll get a good taste of what the spray feels like and still be able to decontaminate relatively quickly.

A very small percentage of people are allergic to red peppers and will have a serious allergic reaction if exposed to OC spray.  If you feel your face and throat swelling, get hives, or have serious difficulty breathing after exposure, seek medical help!  That’s another reason I advocate advanced exposure to OC.  You don’t want to find out that you have a potentially fatal allergy while you are fighting the bad guy!

5) Know how to decontaminate.  If you do get exposed, the best antidote is cold running water and fresh air.  I’ve tried almost all the commercial decontamination products on the market.  None are as good as a garden hose.  If you can’t gain access to running water, flushing your eyes with bottled water or saline solution will work well.  Using some type of soap to remove the capsicum oils on the skin will also help with decontamination. 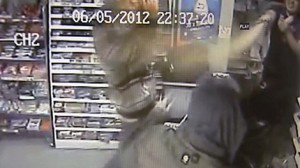 That’s a lot of pepper! He better know how to decontaminate!

Pepper spray is a good tool to have at your disposal, but it isn’t quite as easy to “Just Spray and Walk Away” as the manufacturers would have you believe.  Think about your options and practice!