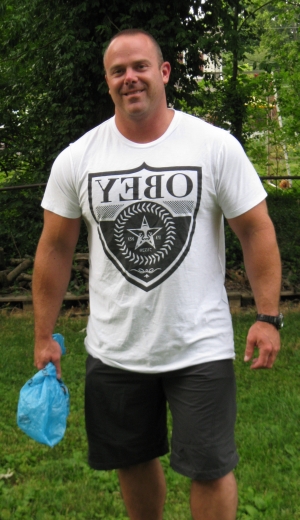 Students who have taken my knife fighting class will likely remember “The Bag Trick”.  I demonstrate  it in every 2-day class I teach.  My students all give me the same feedback after seeing it “That’s so simple, but it’s genius!  Learning  that one technique was worth the price of the whole class!”

People are used to seeing someone walk around with plastic grocery bags in their hands.  The same ubiquitous bag can be found in every corner of the world.  Carrying it draws no attention because it’s a common part of the scenery.  No one looks twice.

Would you pay any attention to a man walking down the street with a plastic bag in his hand?

Now, place a gun or knife into the bag.  Grip the weapon from the outside of the bag and go for a walk, letting the covered gun hang loosely at your side as if you were carrying some groceries home from your trip to the convenience store.  You have an instantly available weapon in your hands that will go undetected by almost everyone who sees it.  You have improved your odds of winning a violent confrontation immensely because you no longer have to worry about drawing (or in the case of a knife, opening) your weapon.  It is already in your hand and ready for action. 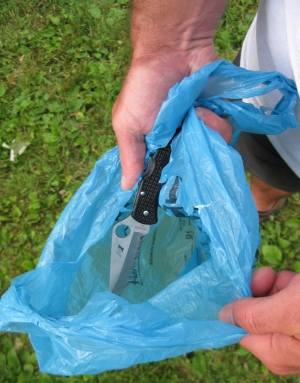 That bag in his hand might contain more than just groceries

I’ve used the technique dozens of times in dodgy third world countries.  If I get caught in a dangerous part of town, I’ll just stop into the corner store and buy a couple bottles of water.  They’ll put them in a plastic sack and I take it into a restroom.  I remove the water, place my knife (opened and ready for action) in the bag and walk out.  No one notices and I feel a whole lot better prepared to handle a violent attacker.

Here are some additional tips…

1) It works best if you have a darker colored opaque bag.  Clear or grey colored bags often don’t conceal the weapon enough

2) If you are using a gun, you can shoot right through the bag, but you won’t be able to see your sights.  Practice point shooting and shooting from a retention position BEFORE you carry a gun this way “for real”.

3) If you are using a gun with this method, a revolver is a better choice.  A semi-automatic pistol will often malfunction when the slide gets tangled up in the bag. 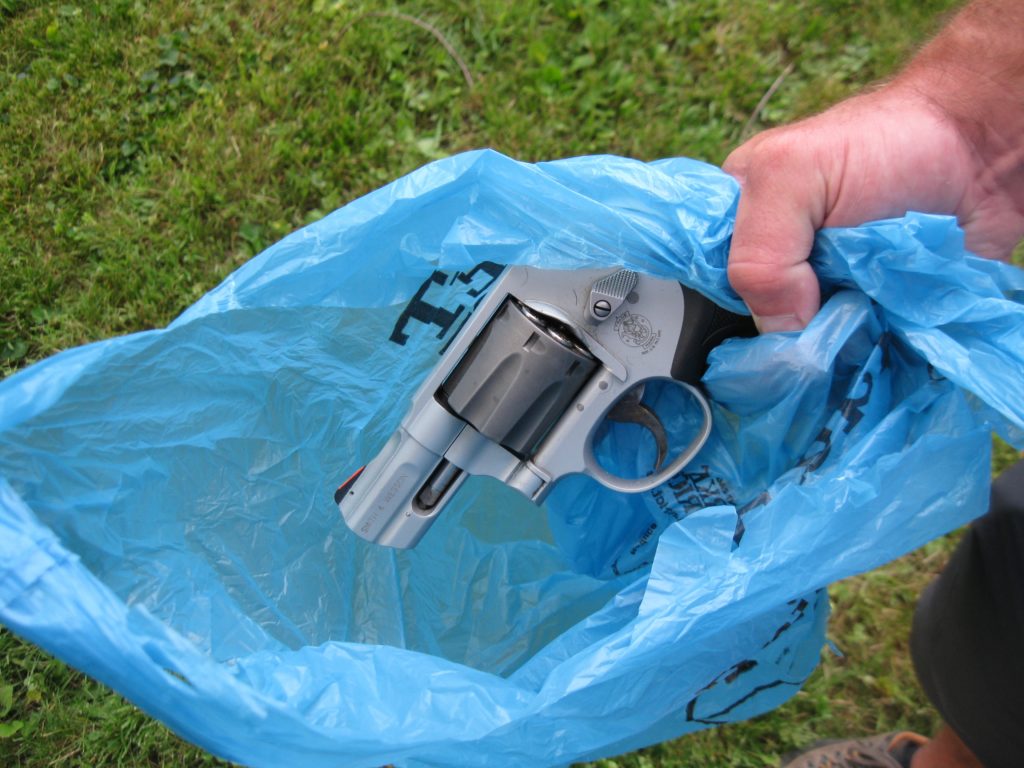 4) If you are using a knife, just stab right through the bag.  It is faster than removing the knife.  After the initial stab, you will be able to use the edge of the knife to slash or pressure cut, as most of the blade will be sticking through the bag 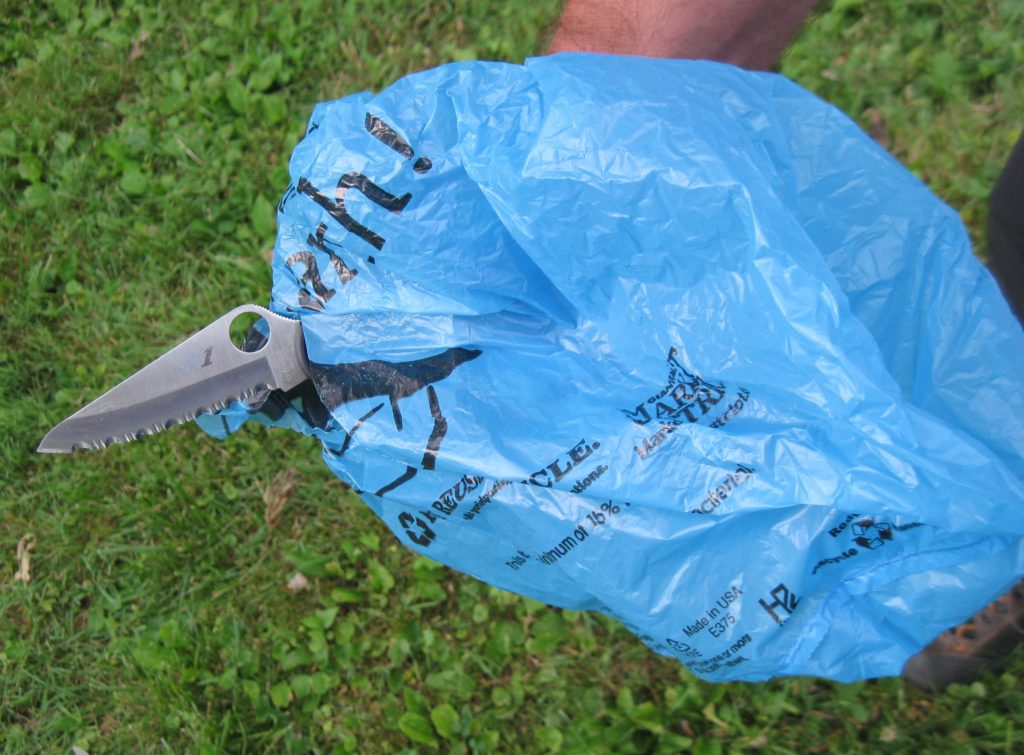 Don’t remove the knife, it takes too long. Just stab through the bag.

5) Reserve this technique for only the most dangerous of situations where you need a weapon in your hand.  In less-dangerous spots, it may limit your options as it is difficult to respond physically (to an attack that doesn’t require lethal force) if one of your hands is tied up holding a weapon.  It will also certainly cause a prompt reaction from the local police if one of them takes notice.  It’s better to err on the side of caution and save this one for when you really need it.

6) Be careful of thieves and purse snatchers.  Sometimes criminals will target the bag in your hand, thinking it contains something valuable.  I once had this happen to me in Egypt.  I was walking through a “souk” (outdoor market) in Luxor very late at night.  I probably shouldn’t have been there as it was a “local” place far off the tourist routes.  I had a knife in a bag and was quickly walking through the crowd trying to leave the area when I was accosted by a teenage boy.  He grabbed toward my bag and screamed “GIVE IT TO ME NOW!” in perfect English.  He thought I was carrying something expensive I had purchased in the market and decided to rob the “clueless” tourist.

Fortunately, his robbery attempt was unsuccessful and I got out of the situation unscathed.  It helped that I outweighed the boy by 150 pounds!  Sometimes I wish I hadn’t been so quick to pull the bag out of his reach.  He would have received quite a shock if he was able to forcibly grab my knife blade.

I first learned of this concealment technique from a conversation with a criminal.  You can bet that if you know about it, the bad guys do too.  When people are carrying a single bag with no grocery store in sight, keep your guard up.  Here’s how to tell if that bag in a person’s hand contains a weapon or something more innocuous…

1) Look at how he is carrying the bag.  Most people carry  bags by the handles, not in the middle.  If the person isn’t using the handles, be cautious.

2) Beware of an overly tight grip.  Most people carry bags loosely.  The death grip should be a warning sign.

3) Look at where the bag is in relation to their body.  People let shopping bags hang down by their sides.  If a person is cradling a bag near his midsection and is shielding it from passersby, it may contain a weapon

4) Look for bags that only contain one item.  Most people will carry a bag only when they have several items.  If the content of the bag appears to be light weight or a single item, be alert.  Most people would just carry a single item in their hand without using a bag.

5) Look for the trigger finger.  If a person is carrying a gun in the bag, their trigger finger will be separated from the rest of their hand.  When people carry bags normally, all the fingers are together. 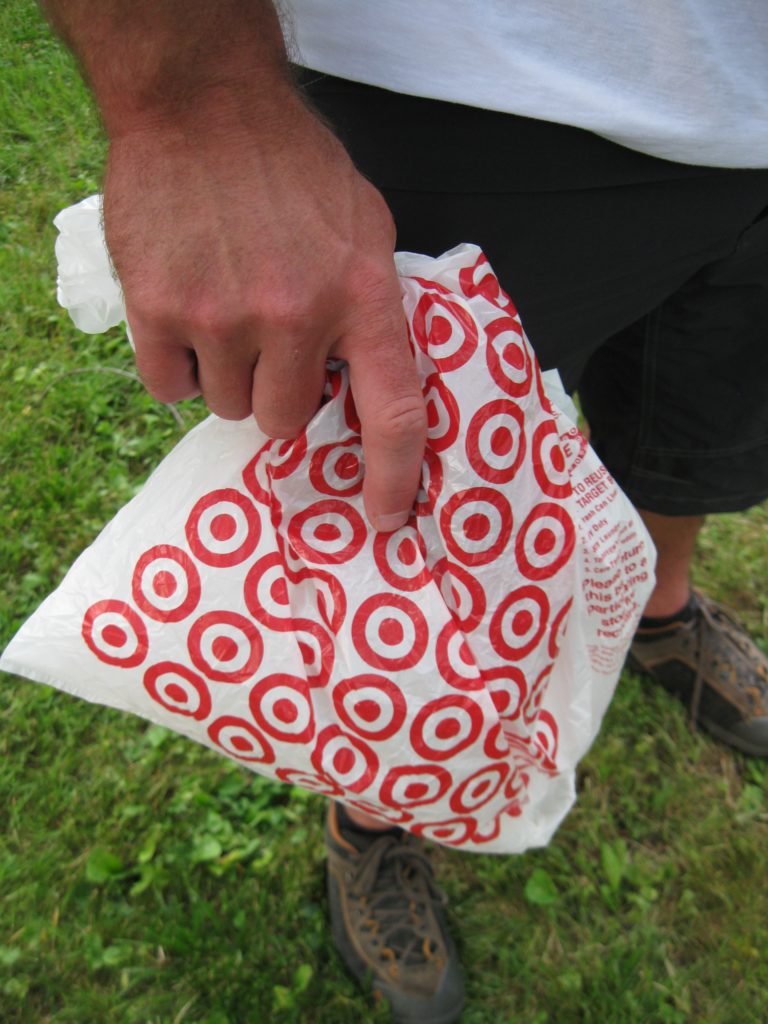 An opaque bag with a pattern works best for concealment. Note trigger finger on the frame of the gun and separate from the rest of the hand.

Be careful with this technique.  Carrying a weapon in your hand while walking through a crowd isn’t the safest option, but there may be times in your life when this little trick is necessary.  Be alert to this technique being used against you by a criminal as well.

You may never look at a plastic bag in the same way again.